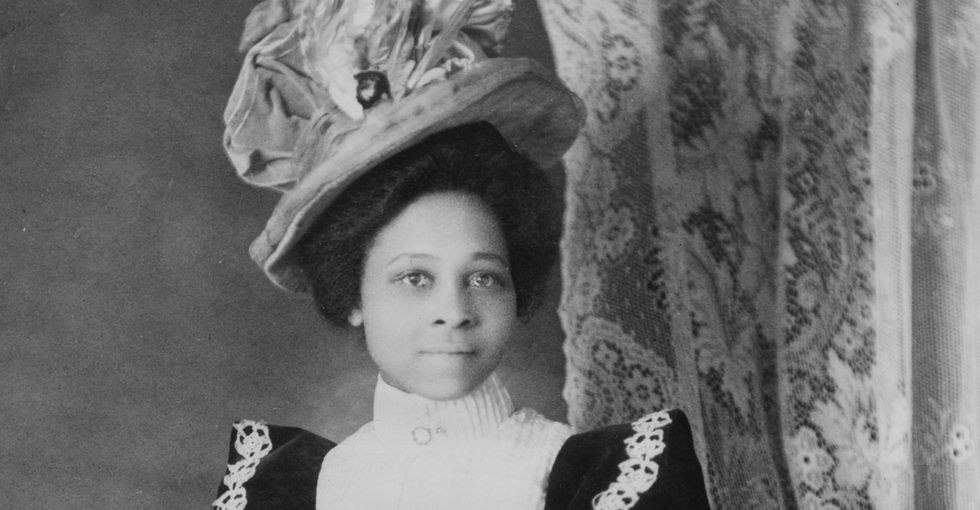 When you think about America's Gilded Age, what do you imagine?

Perhaps you see images of "Little House on the Prairie"? Or photos of dapper gentlemen and women dressed in frilly lace, riding steam engine trains across the country?

Most of us equate the fashion and social norms of that time period with the latter Victorian era that occurred in the U.K. around the same time. And that's not in-accurate, per se ... except for the part where we tend to assume that everyone was white.

Yes, Jim Crow laws were in effect. But there were still plenty of black Americans rockin' those cravats and wide-brimmed hats, too. You just don't see them in most history books.

So I dug up 17 of my favorite historical photos of black people in Gilded Age fashions. Believe it or not, they were easily accessible through public archives — which means they've been there all along, waiting to show us what history really looked like.

Born into slavery in Virginia, Mays enlisted in the military as a free man and received a Medal of Honor for his actions in the Wham paymaster robbery of 1889.

2. Or take a moment to admire parasol-wielding Nellie Franklin.

Not much is known about this dapper debutante other than that she was near Tallahassee, Florida, when this photo was taken between 1885 and 1910.

3. Eartha Mary Magdalene White was a humanitarian and philanthropist.

A lifelong resident of Jacksonville, Florida, White amassed her fortunes through serial entrepreneurship in real estate, laundry, dry goods, taxis, and more. Along with her adopted mother, Clara (also pictured), she provided for the hungry and homeless and also built the first public school for black students in nearby Bayard, Florida.

Image via State Archives of Florida.

4. The Honorable Reverend Hiram R. Revels was the first black person to serve in the U.S. Senate.

He only served for about a year for the state of Mississippi from 1870 to 1871 before being appointed as the first president of Alcorn Agricultural and Mechanical College (now Alcorn State University).

5. Whoever they are, this man and his son were fine examples of the fashions of the times.

Not much is known about the subjects of this photograph other than that it was taken in Connecticut at some point during the 1860s.

Image via Bundy and Williams/Gladstone Collection of African-American Photographs/Library of Congress.

6. And then there's this little girl, who is clearly not pleased that her parents made her wear such period-appropriate dress.

Hey, we've all been there. This photo was taken sometime between 1890 and 1900, and was part of W.E.B. DuBois's collection, which was featured at the 1900 World Expo in Paris.

7. The Florida A&M graduating class of 1904 looks ready for their yearbook photo.

At the time, the historically black college was known as the Florida State Normal and Industrial School for Colored Students.

Image via State Archives of Florida.

8. And these women were shading themselves from the hot Georgia sun while showing off their Sunday best, too.

Not much is known about the subjects here either other than that the photo was taken around 1899.

9. People didn't only dress up for special occasions, though. Here's a family lounging for a portrait on a lawn in Georgia around the turn of the century.

10. Photography was getting pretty common and accessible by the 1890s. But people still liked to look good.

This photo was taken in or around Tallahassee, Florida, sometime between 1885 and 1910. Note the fancy feather fan in her hand — it probably came in handy in that humid heat.

12. And look at this guy's sweet satin coat!

She was a star soprano singer and the first black artist to perform at the White House in 1878.

15. The Honorable Blanche Kelso Bruce of Mississippi was the first black American to serve a full term in the U.S. Senate from 1875-1881.

Like Revels, he was a Republican from Mississippi. He later served as the register of the treasury under Presidents James Garfield and William McKinley.

16. And who could forget Small?

Little is known about this man beyond his name and the fact he was walking around Philadelphia at some point in the late 1850s, showing off these fine threads.

17. Last but certainly not least, let's not forget the black fashions of the Victorian era that were occurring across the pond.

As fun as it is to look back at the fashions of yesteryear, it's also a good reminder that actual history isn't as white as we make it out to be.

Cultures and skin colors have all been intermingling since at least the days of ancient Rome. That's why it's so important to point out these not-actually-fluke fashions: because race might not be "real," but racism through erasure definitely is.

All too often, the movies and media and books that retell the stories of our past err on the side of all-white casting unless it's something that's explicitly about race. And all too often, they use "historical accuracy" as an excuse for that same whitewashing — regardless of the easy-to-find evidence presented above.

They say that "history is written by the winners." But I think it might be time to set the record straight.