13 devastating photos to show your friend who doesn't believe in climate change. 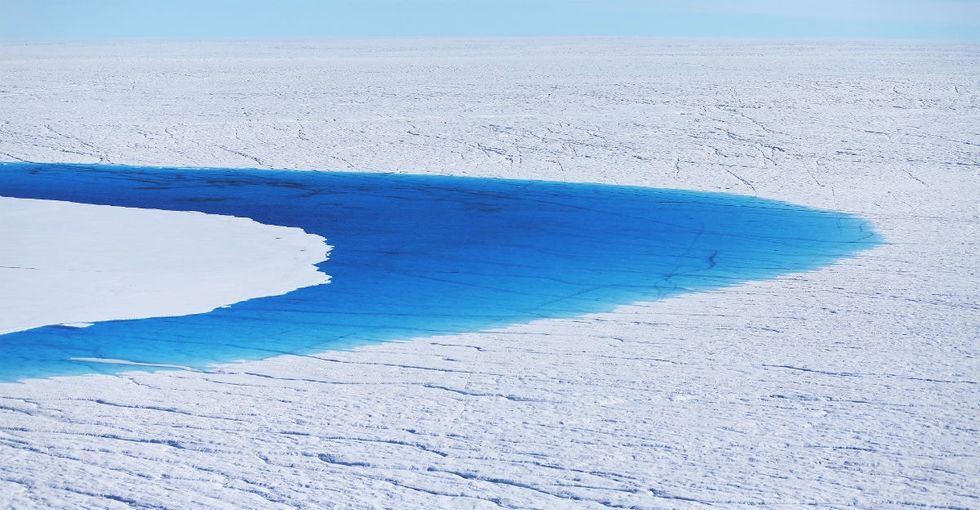 Don't take my word for it, though — take the 97% of climate scientists' who believe climate change is not, um, voodoo, but, in fact, a real thing largely caused by us.

Although science says climate change is certainly happening, however, Americans are a bit less sure. In a Gallup poll published back in March, only slightly over half the country believes the effects of global warming are occurring.

That ... isn't good. Because, as Dana Nuccitelli wrote for The Guardian, when people are less certain of climate change, they're, of course, less inclined to fight it.

"Research has shown that perception of consensus is linked to support for climate policy. This is true along most of the ideological spectrum — when people are aware of the expert consensus on human-caused global warming, they are more likely to support taking action to solve the problem."

So, in order to convince your friend/dad/aunt/neighbor that climate change is not actually a vast conspiracy so that we can push progress along...

1. A critical water shortage in Lodwar, Kenya, is no joke.

East Africa has been hit hard by a critical shortage of water, which climate change has only exacerbated. We'll be seeing a lot more droughts, like this one in 2009, due to rising global temperatures. Photo by Christopher Furlong/Getty Images.

2. The Passu Glacier in Pakistan is disappearing. Quickly.

This photo, taken in September 2015, shows a shrinking Passu Glacier in Pakistan's Gojal Valley. It's melting, and fast. Thanks, climate change. Photo by Aamir Qureshi/AFP/Getty Images.

3. Bedono, Indonesia, is no stranger to massive flooding...

These floodwaters in Bedono, Indonesia, in 2013 were no laughing matter. Just like we can expect more droughts, we can also expect more flooding due to a warming planet. Photo by Ulet Ifansasti/Getty Images.

This flood from 2014 in England wiped out an outrageous amount of farmland. In general, climate change means wet places will get wetter, and dry places get drier. (In both cases, not good.) Photo by Matt Cardy/Getty Images.

OK, last flood photo (I swear). But doesn't this one truly show how big of a deal this is? It was taken back in 2013. You can imagine how dangerous these flood were — to both the region's wildlife and people. Photo by Sean Gallup/Getty Images.

6. Brush fires, like this one in Lake Hughes, California, will be getting more and more common.

This photo, taken in 2013 in Southern California, hits particularly close to home. Forest fires — a symptom of climate change that will only get worse with rising temperatures (remember when I mentioned dry places getting drier?) — remain a serious concern in the Golden State. Photo by David McNew/Getty Images.

7. And polluted air, seen here in Wuhan, China, will make Earth warmer while hurting our health.

This, ladies and gentlemen, is air pollution, captured in 2009 in Wuhan. Our addiction to burning fossil fuels doesn't just contribute to the planet's warming — it's downright terrible for our health. (I would not want to be a pair of lungs in that city.) Photo by STR/AFP/Getty Images.

Whoa, the glacial ice sheet of Greenland is freaking gorgeous. Unfortunately (I hate to be Debbie Downer, but), that beautiful blue streak you see there? It's melted water. And that's not a good sign for coastal cities around the world, seeing as melting ice means rising sea levels. Photo by Joe Raedle/Getty Images.

9. That big red blob in the Gulf Coast? Yeah, not good.

This satellite image of the Gulf Coast from 2008 captures Hurricane Gustav. It/he was a Category 3 storm that tore through Louisiana and endangered thousands. Climate change means more severe storms, just like this guy. Photo by NOAA via Getty Images.

10. Vincennes Bay, Antarctica, is getting warmer (and wetter).

This image, taken in Antarctica in 2008, is beautiful ... but also sad. Similar to what's happening in Greenland, the ice near Earth's poles is melting. And Vincennes Bay is no exception. Photo by Torsten Blackwood - Pool/Getty Images.

11. And Tehuacán, Mexico, is getting hotter (and drier).

A water hole in Tehuacán has definitely seen better days. The region, captured here in 2006, has been drastically affected by climate change, suffering from long, dire water shortages. Photo by Brent Stirton/Getty Images.

12. Coastlines, like this one in Shishmaref, Alaska, are literally falling into the sea.

This is Alaska in 2006. Rising temperatures have resulted in less sea ice and thawing of coastline permafrost, which, in turn, means more erosion. And more erosion means beach communities can end up looking like this. Photo by Gabriel Bouys/AFP/Getty Images.

13. And Marree, Australia, is one hot place.

Australia — already a pretty warm place — is getting hotter because of climate change. This photo, taken of the outback in 2005, shows what increasingly hot temperatures are doing to landscapes Down Under. Photo by Ian Waldie/Getty Images.

You just saw 13 depressing photos and feel hopeless and helpless and #OmgTheWorldIsEnding, right?

The good news: People are increasingly waking up to the reality of climate change. Increased pressure on leaders to fight warming temperatures (both in the U.S. and abroad) has resulted in more eco-friendly policies around the world. And at the end of November, world leaders will gather in Paris for the United Nations COP21 summit with a mission to combat climate change for decades to come.

So what can you do this very moment? Fight oil drilling in the Arctic. Put more pressure on the president to make climate change action a top priority. Or learn how to live a little bit greener every day, just by doing the simple things.

The problem of climate change can seem overwhelming. But it's problem we created, and it's a problem only we can fix.