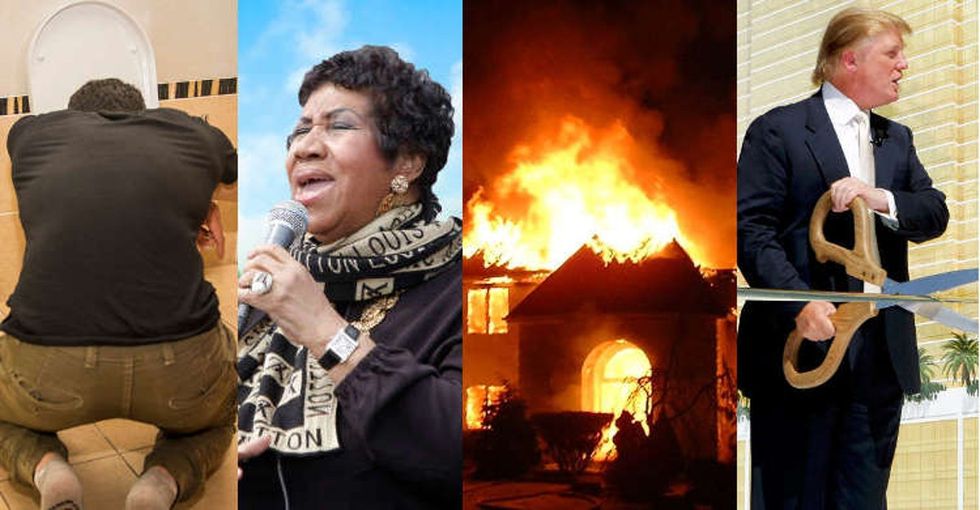 For Donald Trump, it seems a little light anarchy might just be the price of a really sweet deal.

Following the bombshell New York Times report that in 1995, the businessman and current presidential candidate claimed losses so staggering that he might not have paid federal income taxes for 18 years, two possibilities have emerged:

One is that Trump truly did lose almost a billion dollars in one year. The other — the one Trump would prefer we all believe — is that the former casino, university, vodka, and steak mogul is so adept at gaming the system that, with one genius pen-stroke, he was able to avoid any of his hard-earned dollars going to Uncle Sam for nearly two decades.

It's a dubious claim, at best. But suppose we take Trump at his word. Suppose we extrapolate that out a little. I mean, I like to think I'm smart. You seem smart too. And Trump has a point: Not paying out 10-40% of our annual income is certainly tempting. If taxes are optional, why shouldn't we all benefit?

What if we were all so smart that we didn't pay our taxes?

Without the Federal Highway Administration and various state and local port authorities and departments of transportation, commuters would have to cross rivers the old-fashioned way.

On the plus side, the plastic kayak industry would boom and your upper body would be much stronger.

For a mere $3 billion per annum, the National Park Service provides every American with the opportunity to stare slack-jawed at a bison out of their rental-car window as often as they like for as long as they like.

Without it, America's most iconic hydrothermal hotspot would just be another empty plot of land. Maybe not entirely empty. Someone would probably put a parking lot there. Who knows?

4. Aretha Franklin performing "A Natural Woman" would look something like this.

Washington, D.C.'s John F. Kennedy Center for the Performing Arts opened in 1971, eight years after Congress authorized $23 million of federal funds to build it. Which means that without your tax dollars, Franklin's iconic late-career performance of "A Natural Woman," which brought President Obama and Carole King to tears, never would have happened.

Actually, the performance might have still happened, but it would have happened in an empty field with no one around to enjoy it. Sad!

Without the hundreds of millions of dollars we contribute in taxes to state law enforcement budgets, there would be no police to stop The Purge from happening.

True, even well-funded police aren't perfect, but if there's one thing cops are probably good at, it's keeping the crazed cannibal armies at bay. And for that, we at least owe them our thanks and a small cut of our paychecks.

Who doesn't enjoy a round of salmonella roulette?! Without the $1 billion we send the Food Safety and Inspection Service annually, it wouldn't matter because you wouldn't have a choice but to play!

A small but not insignificant 0.48% of federal spending goes to funding America's critical scientific infrastructure, including the Duck Research Laboratory in Eastport, New York, which studies basic duck care, duck nutrition, and duck housing and management.

Suffice it to say that you don't want to think about how America's ducks would be doing if we didn't pay taxes.

When no one is paying taxes, don't expect the Coast Guard help you flip your turtled sailboat. Your nautical accidents are your own damn problem. Up by your bootstraps! Self-reliance!

We can debate the merits of funding private sports stadiums with taxpayer money all night and all day, but if you thought the beer selection was terrible at Yankee Stadium now ... yikes.

Your tax dollars helped build the internet, which means probably no email, definitely no Facebook, and super-definitely no cat-stands-on-two-legs-cause-it-thinks-it's-a-person GIFs.

You would finally finish that screenplay with all the time you'd save, though.

National defense makes up nearly a quarter of the federal budget. It's an important quarter because (good-faith disagreements about appropriate levels of military spending aside) without that money, we'd be sitting ducks for a Norwegian invasion force. They wouldn't even have to send an army. A bunch of children could do it. Here is their victory parade.

Taxes pay for a lot of cool stuff. Necessary stuff. Most Americans, it turns out, agree with that.

Sure, you might think taxes are too high. Or you might think they're too low. You might object to some of what they pay for. But hey, it's nice to have highways! And schools. And relative safety. And society.

Maybe Trump's right and it takes a genius to get away with not paying taxes. Lucky for America, we're not all so smart.