10 photos of seriously wounded vets remind us about the real costs of war.

It's not rude: These photos were meant to be stared at. 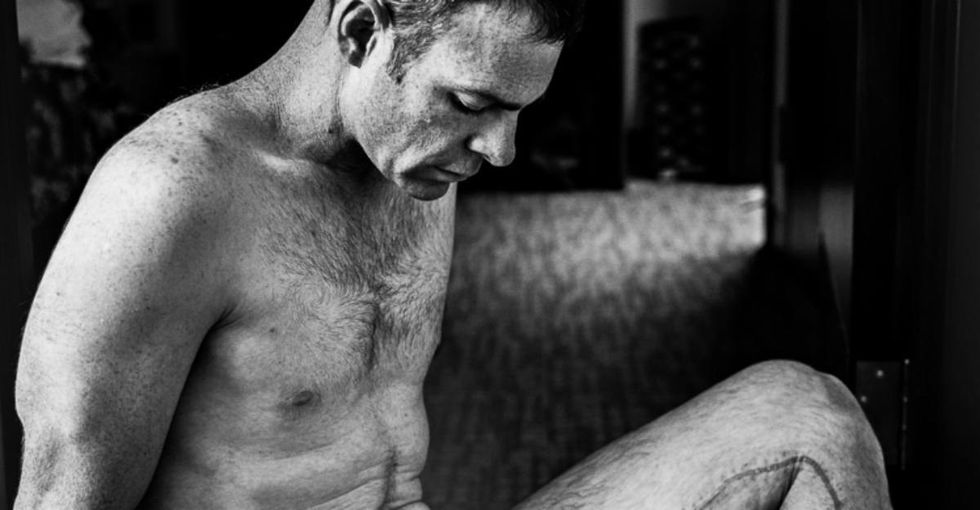 This article originally appeared on 05.31.15

Photographer David Jay specializes in fashion and beauty, stuff that's "beautiful and sexy — and completely untrue," as he puts it. But that's not all he photographs.

Three years ago, Jay began to take pictures of young, severely wounded soldiers returning home from the wars in Iraq and Afghanistan.

Trigger warning: These portraits don't shy away from wounded bodies.

Be prepared. I found them shocking at first. But keep looking. The more I looked, the more beauty and humanity I found reflected here. (The photo captions are from the Jay's Unknown Soldier Project Facebook page. All images used with permission.)

This is 1st Lt. Nicholas John Vogt, U.S. Army. On Nov. 12, 2011, he was severely injured by an IED while on a foot-patrol in Panjwaii, Afghanistan. We took these pictures this past weekend in the swimming pool at Walter Reed Medical Center. I asked Nicholas for his permission to post these images and this was his response: "The only thing that I want to pass on is this: Losing limbs is like losing a good friend. We wish we could still be with them, but it wasn't 'in the cards.' Then we get up, remember the good times, and thank God for whatever we have left." Image by David Jay/ David Jay Photography. All images used with permission.

In a National Public Radio interview about his project, Jay said, "You can imagine how many times each of these men and women have heard a parent tell their child, 'Don't look. Don't stare at him. That's rude.'"

"I take these pictures so that we can look; we can see what we're not supposed to see. And we need to see them because we created them." — David Jay

Jay wants us to see, to become even a little familiar with the tragic loss of limbs and burned skin of wounded vets — his portraits are 4 feet wide — but he also wants us to see them as people and to think about their experiences and those of people in their lives.

This past week, I went to San Antonio, Texas. There I had the privilege of photographing both Daniel Burgess and Bobby Bernier. They are friends. Daniel stepped on a IED, losing one leg and destroying the other. Bobby was hit by incoming artillery, sustaining burns over 60% of his body. He is pictured here with his daughter Layla.

This is Maj. Matt Smith. This past week, Matt allowed me to photograph him in his room at the Walter Reed Medical Center in Bethesda, Maryland. Less than three months ago, on June 8, 2013, in Paktika province, Afghanistan, Matt was shot along with five others by a member of the Afghan National Army. The bullet severed his femoral artery, resulting in the amputation of his leg. A private and soulful man, it was an honor to photograph him. Thank you, Maj. Smith.

This is Jerral Hancock. He was driving a tank in Iraq. A roadside bomb pierced the armor, breaching the interior. We shot these pics two weeks ago at his home in Lancaster, California, where Jarral lives with his two beautiful children. We ended up hanging out into the night, smokin' ciggys ... so I kept taking pictures.

"To the men and women of The Unknown Soldier, I can't thank you enough for your courage and sacrifice ... both on and off the battlefield. It is an honor to photograph you." — David Jay

On July 25, 2012, SFC Cedric King, an Airborne Ranger, was severely injured by an IED while serving his country in Afghanistan. Due to the explosion, Cedric sustained a multitude of internal and external injuries, losing both his legs. Cedric was doing his laps while I was photographing 1st Lt. Nicholas Vogt in the pool at Walter Reed Medical Center last week. Cedric kept watching, so I had to ask. Cedric said, “That man (Nicholas) doesn't know it, but he changed my life. There was a point when I was so down that I thought I couldn't go on. And then one day I saw him swimming ... and I just thought, wow ... if he can go on like that, then I can go on too." Cedric will also change people's lives. Already has.

This is Michael Fox, a 27-year-old Marine and an amazing man. On Nov. 15, 2011, Michael was on foot-patrol in the Helmand province of Afghanistan. His is the first picture of "The Unknown Soldier."

This past weekend, I photographed Staff Sgt. Shilo Harris in Houston, Texas. He came up from San Antonio to see one of my other exhibitions, The SCAR Project (www.thescarproject.org). Shilo was severely burned on Feb. 19, 2007, by a roadside bomb estimated at 700 pounds. He lost three men out of a crew of five. Only Shilo and his driver survived the blast. Shilo has a book coming out soon. He is truly an amazing man, and I am honored to call him a friend.

"The Unknown Soldier is about neither war or politics ... but rather something infinitely simpler and more powerful." — David Jay

The Library of Congress has acquired images from Jay's The Unknown Soldier project as part of its documentation of the wars in Iraq and Afghanistan. This speaks to the power of these images in capturing war's aftermath. But they are so much more than documentation.

Pictures like these help those of us who remain at home to begin to comprehend the true human cost of war.