Money raised by the viral campaign is making a big difference. 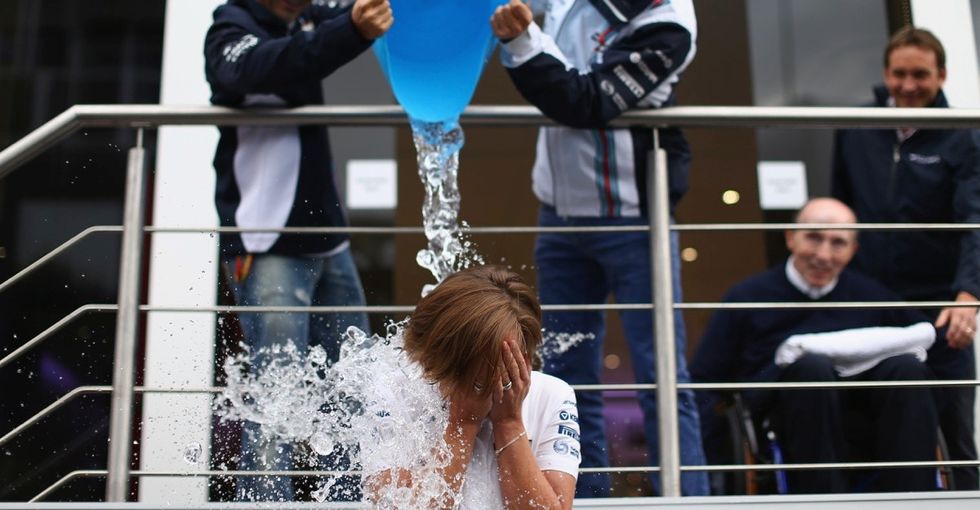 Of course you do. It was that viral video campaign that took off last summer where you'd log into Facebook and see a steady stream of your friends dumping water on themselves in the name of awareness and research for the ALS Association.

Some brushed the movement off as an example of "slacktivism," but it actually helped raise more than $100 million. When you compare it to the $2.8 million raised by the organization during the same period a year earlier, it's clear that the Ice Bucket challenge paid off.

ALS, also known as amyotrophic laterals sclerosis or Lou Gehrig's Disease, affects an estimated 30,000 living people at any given time.

It's a disorder that affects nerve and muscle function. Just 20% of those with the disease will live more than five years following diagnosis. It's brutal.

But there's good news — due, in part, to the money raised by the Ice Bucket Challenge.

While that man doesn't seem to be having such a great time, I really need to find out what kind of seemingly IBC-proof makeup the woman on the left is using. Photo by Scott Barbour/Getty Images.

During a reddit "Ask Me Anything" session, ALS researcher Jonathan Ling unveiled a major breakthrough in his work.

Ling wanted to do an "Ask Me Anything" to debunk some of the negative things being said by skeptics about the success of the Ice Bucket Challenge.

"I mainly wanted to do this ["Ask Me Anything"] because I remember reading a lot of stories about people complaining that the ice bucket challenge was a waste and that scientists weren't using the money to do research, etc. I assure you that this is absolutely false," Ling writes.

"All of your donations have been amazingly helpful and we have been working tirelessly to find a cure. With the amount of money that the ice bucket challenge raised, I feel that there's a lot of hope and optimism now for real, meaningful therapies."

So what's the big breakthrough? Well, it has to do with protein — or rather, one specific protein.

Ling's research focuses on TDP-43, a protein in cells that's he's been able to link to ALS.

Ling breaks down the purpose of TDP-43 with an analogy involving a library that's easy for us non-scientist types to understand:

"DNA is located in the nucleus of a cell. You can think of a nucleus as a library except that instead of having books neatly lined up on shelves, the books in a nucleus have all of their pages ripped out and thrown around randomly.

To sort through this mess, the cell has great librarians that go around collecting all these pages, collating them and neatly binding them together as books. These librarians then ship these 'books' out of the nucleus so that other workers in the cell can do their jobs. Think of these books as instruction manuals.

TDP-43 is a very special type of librarian. TDP-43's job is to ensure that nucleus librarians don't accidentally make a mistake and put a random nonsense page (usually filled with gibberish) into the books that they ship out. If one of these nonsense pages makes it into an 'instruction manual,' the workers in the cell get really confused and mess things up. For terminology, we call these nonsense pages 'cryptic exons.'"


His team found that in 97% of ALS cases, TDP-43 wasn't doing its job. And now that they know this, they've been able to begin work on new therapies to do TDP-43's job for it. If successful, he believes this can slow down the progression of the disease.

How cool is that?

Baseball Hall-of-Famer Lou Gehrig became the face of ALS after he tearfully retired from baseball upon diagnosis. Photo by Hulton Archive/Getty Images.

But what about the other 3%? Well, we don't have all the answers just yet.

One redditor asked that question, and essentially, it boils down to the fact that ALS is still pretty unpredictable. While TDP-43 may play a large part in the disease's progression, it's not the whole picture. For those individuals for whom ALS runs in the family, that seems to be linked to a gene called SOD1, and not TDP-43.

That's why research needs to continue.

"When you look at ALS from a genetics perspective, about 10% of the cases are called 'familial', [that is], lots of people in the family have ALS and it seems to be passed down. The other 90% of ALS appears to occur completely by unfortunate chance and we call that 'sporadic.'

As researchers, we look to the genetics for clues to study the disease. One of the first family-linked genes discovered was a gene called SOD1 that is found in about 30% of familial cases. But it's starting to seem like SOD1 is an outlier because TDP-43 doesn't seem to be messed up. Instead, SOD1 seems to clump together due to the mutation. We get the 3% because 30% of 10% familial is 3%." — Ling

But yeah, this is pretty neat, exciting stuff!

Ling hopes to have therapies based on his research making their way to clinical trials within the next two-three years.

And from there, who knows? Maybe this is the breakthrough that sets up the next big step in finding a cure for this absolutely ruthless disorder. 76 years after it first entered the public consciousness with Lou Gehrig's emotional farewell speech, a cure feels closer than ever before.

Last year, we shared a video by Anthony Carbajal, a man who had been recently diagnosed with ALS.

ALS runs in Carbajal's family. His grandmother, his mother, and he have all been diagnosed with the disorder. His Ice Bucket Challenge video was powerful because it put a face to the research and the desperation for a cure.

The research made possible by the Ice Bucket Challenge gives hope to people like Anthony. It's just so important.

Saying that 30,000 people live with ALS doesn't mean a whole lot until you see the pain it causes those living with it and watching their loved ones do battle. When you watch Anthony's video, his tears welling up in his eyes, it's clear just how much the world needed something like the Ice Bucket Challenge to fund the research we need to put an end to ALS once and for all.