Why on Earth would 4 men on an inflatable raft try to rodeo a humpback whale? To save it. 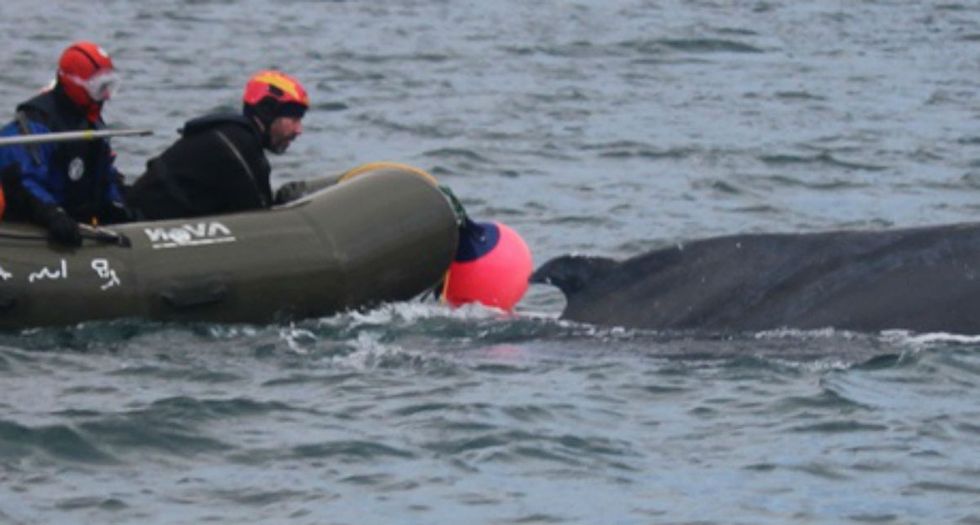 On Friday, Jan. 8, Alistair Jack got the call — a whale was in trouble.

Alistair is the Scottish director of British Divers Marine Life Rescue (BDMLR). When a seal gets stranded or a whale gets tangled in fishing gear, they're the people the country turns to.

Alistair heard the details — a 40-foot-long humpback was tangled in prawn pots on a sea loch in northern Scotland. He checked the weather forecast. It was bad.

But there was a tiny window — just four to five hours where the wind would be light enough to let a boat go out.

He knew what he had to do: assemble the Large Whale Disentanglement Team.

Image used with permission from Laura Shirra and BDMLR.

Alistair arrived at the town closest to the whale at 3:30 a.m. the next morning.

By dawn, the rest of the team had arrived too — seven other volunteers from all across Scotland. Some came from as far as Glasgow, over 180 miles away.

BDMLR has more than 2,000 medics in towns across the U.K. who can help with stranded animals. But the disentanglement team is special — they're the SWAT team of whale rescue.

The team set out just as the sun was starting to rise.

The team approached the whale by boat, then Alistair, joined by two other volunteers named Brian Corbett and Noel Hawkins, climbed into a specialized inflatable raft and maneuvered closer.

This was the first time the team could get a good look at the whale's predicament. Lines from the prawn pots were wrapped around the whale's tail, fins, and head, dragging it down like an anchor.

Entanglement is dangerous for two reasons.

First, whales are mammals, which means they need to breathe air. If the entanglement is really heavy, the animal could drown.

A whale's blowhole is actually its nose. A humpback usually needs to breathe about once every 15 minutes. Image from NOAA/Wikimedia Commons.

Second, even if the fishing gear is light, it can dig and cut into the animal's skin, which can mean a long, slow death by infection.

The team got to work, using specialized cutting poles to try to snip the lines holding the whale.

But no matter what they tried, they couldn't quite get a hold.

So they tried something else.

Joined by another volunteer named David Scott, Alistair and the team in the inflatable raft moved their craft directly over the whale. David and Alistair grabbed a hold of the line around its head. Using the gear like a horse's bridle, they helped hold the whale still while Brian, now closer, started to try to cut the lines away.

Saving a whale can be incredibly dangerous work.

During the entire operation, the rescuers stayed in the inflatable raft. Though Alistair is an experienced scuba diver, it would be too easy for a diver to get hurt or end up tangled in the line as well. Even in the boat, it's very dangerous.

"You're working with a wild animal," said Alistair. "It's frightened. It's confused. It doesn't necessarily know you're there to help it."

And even if everyone stays in the boat, it doesn't mean the rescue will necessarily be easy. Last year, a whale off Iceland ended up towing the boat across the ocean.

But back in Loch Eriboll, the rescue was actually going well.

For one thing, the Scottish whale was nowhere near as rambunctious as the Icelandic one had been in 2015.

"It seemed to help us," said Alistair. "It was lifting its head up to allow us to cut the ropes, so it was quite a placid animal, this one."

With the lines cut, the team was even able to haul up some of the pots that had entangled it. Their job wasn't over, however — there were still multiple lines wrapped around different parts of the tail and running around the whale's right flipper.

By noon the whale was safe, the team leaving just in time to beat the heavy wind and rain. It was an absolutely textbook rescue.

Teams like BDMLR's are becoming more and more important.

The last few years have seen record numbers of entanglements.

Scott Landry, director of the Center for Coastal Study's entanglement team in the U.S. told Upworthy the increase is due to a combination of factors: bigger whale populations, more fishing, and people getting better at spotting and reporting entanglements.

Unfortunately, there isn't an easy way to prevent entanglements. "While there has been some movement in entanglement prevention, we have not yet found a silver bullet," said Scott.

As for BDMLR, "the primary thing at the moment is education," said Alistair. People need to know not to try to free whales themselves. Call the experts. If you're in the U.S. and see a whale in trouble, call the U.S. Coast Guard or one of these special hotlines from the National Oceanic and Atmospheric Administration.

The increase in entanglements is troubling, but the fact that teams like BDMLR exist is a ray of hope for whales.

And that's something to celebrate.

Watch the moment when they free the whale's head below.