Why Julia, a new 'Sesame Street' muppet, will be important for every family to watch. 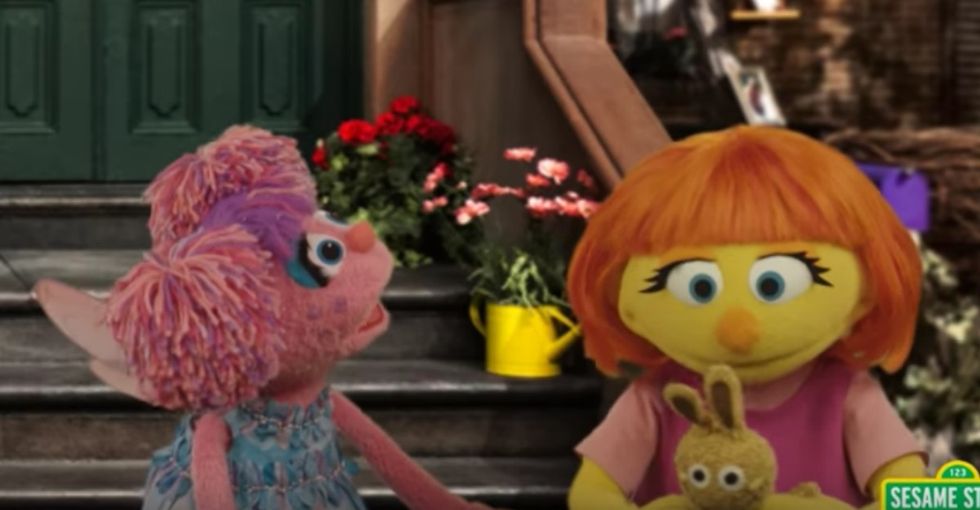 Families everywhere are celebrating Julia, the first new "Sesame Street" muppet to go on air in a decade.

Julia — who was first introduced online in 2015 but makes her small screen debut on April 10, 2017 — will fit right in with the rest of the "Sesame Street" gang. She loves to pick flowers, she's an incredible artist, and she can remember all the words to lots of different songs.

Julia also has autism. And that's a big deal.

"We realized if we brought her to life appearing in 'Sesame Street' on air as well [as online], she would have even more impact," Sherrie Westin, an executive vice president at Sesame Workshop, told NPR.

Julia's on screen presence will be a great learning tool for all types of families.

For parents of kids without autism, Julia provides an opportunity for them to talk about peers who may have different abilities and strengths than their own, according to "Sesame Street." For instance, it may be difficult to get Julia's attention at times (as Big Bird recently learned), but she's an excellent artist who often sees things others don't.

For parents of kids who do have autism, Julia gives their kids the invaluable opportunity to see themselves reflected on "Sesame Street." According to Westin, one mom has already used Julia's story as a way to let her 5-year-old daughter know she, too, had been diagnosed with autism — just like Julia.

Utilizing child psychologists and working with autism advocacy groups, "Sesame Street" is careful about how Julia is being portrayed.

About 1 in 68 children are believed to be on the autism spectrum, after all; the series doesn't want to imply Julia reflects the characteristics and experiences of everyone living with autism.

On "Sesame Street," though, that one person is Julia — a friendly, flower-picking muppet that's making history. And there's no telling how many hearts will open and perspectives will change after she's welcomed into family rooms across the country.