When thousands in Louisiana needed rescuing, the 'Cajun Navy' reported for duty. 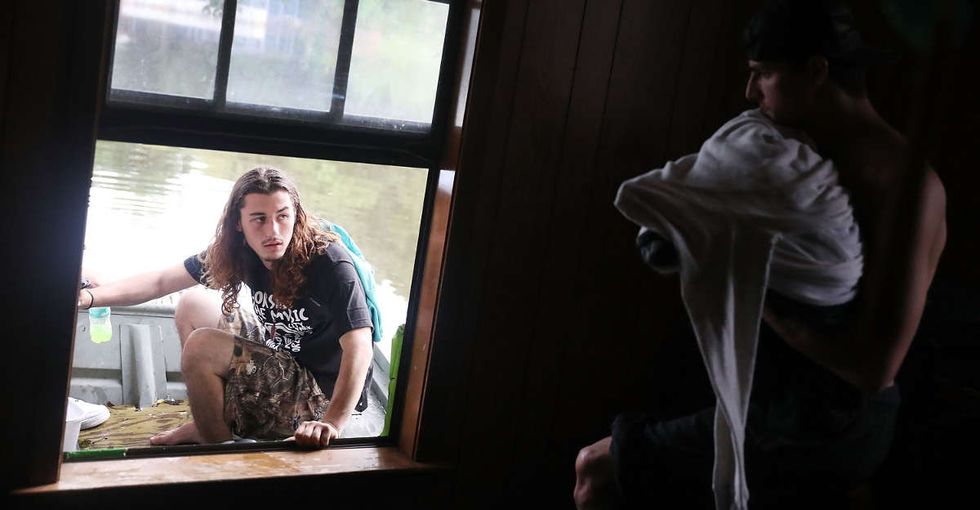 Massive flooding continues to wreak havoc throughout Louisiana in what is being called the "worst U.S. disaster since Hurricane Sandy."

Thousands across the state have lost their homes, belongings, and livelihoods to the floodwaters. At least 13 people have died so far.

In the midst of the crisis, residents are banding together to save their neighbors.

30,000 people have been rescued from their homes and businesses, many by family and friends, others by hundreds of anonymous volunteers — strangers who dropped everything to help others.

They call themselves the "Cajun Navy."

Some drove through the water.

Many others broke out their boats.

The recruitment began when a local radio station put out a call for anyone with access to seaworthy craft meet at a local mall.

The group rescued an estimated 10,000 people.

@uncle_jordy_ and crew able to save some people in wheel chairs the other day. Great work from him and so many others in this time of need.

The "Navy" includes amateur volunteers who have been ferrying people, their belongings, and pets to safety.

A picture my mom took of when my sister and Lucy Girl were rescued from the Great Flood this past Sunday. I am out of the country at the moment and on August 14, 2016 at 6:26am they contacted me on what belongings of mine to take with them when they leave...all I asked for was my Blankie (that I've had since I was born) and my diamond necklace (a family heirloom). Looks like they grabbed a lot more. My sister is known not to pack light haha. Thank you to the man who brought my family out of the neighborhood safely with his boat. #CajunNavy #LouisianaProud #LouisianaStrong #GreatFlood2016 #BatonRouge #PrayforLouisiana #VeraBradley #Morkie #Family #Love #Wewillrebuild #LucysFirstBoatRide

And dedicated, professional crews got in the water to save animals who couldn't swim to safety.

Shoutout to Louisiana State Animal Rescue Teams for coming in and saving some animals who were trapped! 🙏🏻🙏🏻Bless y'all & what y'all do for these innocent animals! They have been working around the clock to bring these animals to safety! If anyone is interested in volunteering for the HUNDREDS of animals in need, head down to Lamar Dixon in Gonzales, LA! #LouisianaStrong #GreatFloodof2016 #CajunNavy #LSART #animalrescues

Sometimes the worst in nature can bring out the best in humanity.

"When I was a boy and I would see scary things in the news," Fred Rogers once said, "My mother would say to me, 'Look for the helpers. You will always find people who are helping.'"

And the "Cajun Navy" appears to be just the tip of the spear. According to the Red Cross, hundreds of people from all 50 states have already arrived in Louisiana to assist in the relief efforts.

At the end of a long day of rescuing, some of the crews even got to celebrate a little.

After helping a numerous amount of people out of the flood, we ran across a very awkwardly clean pool in the middle of flood and decided to take a dip to refresh and clean off ! I can sleep so much better tonight knowing that I was able to play a part in lending a helping hand. #cajunnavy #coonasspoolparty #LouisianaFlood2016

It just might be that the "Cajun Navy" has discovered the secret to defeating disaster:

Loving life and reaching out a hand.