When they saw students acting out, these educators brought ties to school. Here’s why. 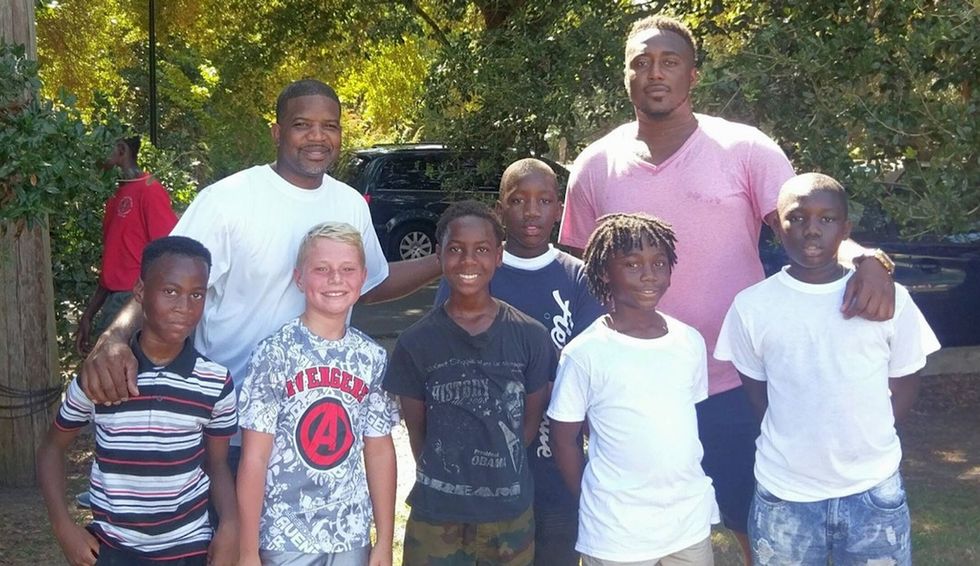 When teacher Kenneth Joyner and student support specialist Raymond Nelson III started working together they noticed something that worried them.

All photos courtesy of Boys With a Purpose.

What they were seeing in the classroom at Memminger Elementary in South Carolina were kids "cutting the cord" between themselves and their teachers. They weren't paying attention. They weren't listening. Overall, there was simply a lack of respect and discipline amongst their young male students.

In many cases, these kinds of discipline problems would be handled with detentions and suspensions. But Joyner and Nelson didn't think that yelling or exclusion would solve any of these problems long-term.

"When you go to my classroom, it says, 'Connect, Inspire, Teach.' That's my philosophy. That's what I live by," says Joyner.

These educators, who have had positive experiences with mentoring in the past, knew they could give the boys in their school a chance to become active participants in their education. So before the 2015 holidays, they decided they'd team up and get to work.

On January 6th, 2016, Nelson and Joyner brought ties to school and offered them to any boy who might want one. It seems like a small gesture, but it made an impact.

The ties Nelson and Joyner brought in actually belonged to them. They were, the men recall, too big and too long for third, fourth and fifth graders. But that didn't matter. The two men were helping kids put them on and teaching them the beginnings of a perfect knot.

And the boys didn't care that the ties didn't fit or that colors clashed. They didn't care that putting a tie over their regular clothes might look silly. All they cared about was that the ties helped them feel confident, more professional and more grown-up. The ties gave them an opportunity to see themselves differently than they had been before.

Nelson and Joyner note that many kids get in trouble because of the perceptions and conditions of worth that have been placed upon them. If a kid gets a reputation for being a fighter, then that kid may have a harder time proving he's more than that. Or say a kid works hard academically, but doesn't feel intelligent because only kids who got 100% on their math tests are called "smart." As a result, he may not make an effort to improve.

With the ties, Nelson and Joyner wanted to send the kids an important message: You don't have to fit into the narrow confines of the roles you may have been pushed into. You can clean up your act, soften your defenses, be both tough and vulnerable. If just putting on a tie made a decided difference, what happens if you adjust your whole image?

Proud of this new confidence the boys were emanating, Nelson and Joyner posted pictures to Facebook. The response made it possible for their small act to become "Boys With a Purpose," a full-fledged leadership program.

Within days of the photos going up on social media, Nelson, Joyner and the boys went viral. Soon, big names started calling. Eventually, Steve Harvey flew five of the boys out to be on his show.

When Nelson, Joyner and the boys returned to school, they were bombarded with donations. People sent ties, then shirts and pants to go with the ties. Nelson and Joyner even received full suits for the boys. This outpouring of generosity allowed the teachers to give clothing to any boy who needed or wanted it.

Eventually they started an after-school program. Nelson and Joyner meet with the boys three afternoons a week, and on Thursdays, everyone dresses up.

While there was initially a misconception about the program — that it was only for kids who didn't have fathers or positive male role models in their life — Joyner notes that's not the case.

Today, Boys With a Purpose is giving more and more kids a chance at a limitless future.

The College of Charleston offered the group a place to meet on their campus, giving the boys yet another opportunity to see themselves differently: as future college students.

Nelson and Joyner also regularly bring in lawyers, doctors and community leaders to inspire the boys. They've even started working with robotics and they're learning how to code.

"What I wanted to make sure that they understood is that everybody is not going to the NBA, NFL, and major league baseball," says Joyner. "I'm happy if you do, but it may not happen, so in the meantime, I need you to work your academics. I need you to use every bit of your brain power that you can to focus. Not just to play video games, but to learn how to make video games."

Of course, the program still focuses on the basics — the boys learn about confidence, self-respect and respect for others. They learn social skills. They learn the importance of living life with integrity. As a result, many of the boys have improved their grades, improved the quality of their social connections and become leaders. Many of them are now role models for their siblings and other students.

These are the things, Nelson and Joyner say, that may take the boys even further than a degree — although, of course, they're hoping that they get one of those, too.

First, though, they hope that Boys With a Purpose's mission catches on across the country, becoming a powerful, positive inspiration for many more sparkling bright futures.

"We're just hoping that we can get people to see the importance," says Joyner. "Because [if] you start off with the boys at an early age, you can plant the seed early."

"That's what we're working on. Trying to plant the seed early, so when they get older, they can already have the tools necessary to be successful."

Clorox is committed to providing a gentle yet powerful clean, which is why they've partnered with Upworthy to promote those same traits in people, actions and ideas. Cleaning up and strength are important aspects of many of our social good stories. Check out the rest in the campaign to read more.

There's a broken shackle and chains at her feet for a reason.

Most Americans associate Lady Liberty with welcoming immigrants, but that's not what she was meant to represent.

If Americans were asked to describe the Statue of Liberty without looking at it, most of us could probably describe her long robe, the crown on her head, a lighted torch in her right hand and a tablet cradled in her left. Some might remember it's inscribed with the date of the American Declaration of Independence, July 4, 1776.

But there's a significant detail most of us would miss. It's a feature that points to why Lady Liberty was created and gifted to us in the first place. At her feet, where her robe drapes the ground, lay a broken shackle and chains—a symbol of the abolishment of slavery.