What I said to God after the San Bernardino mass shooting. 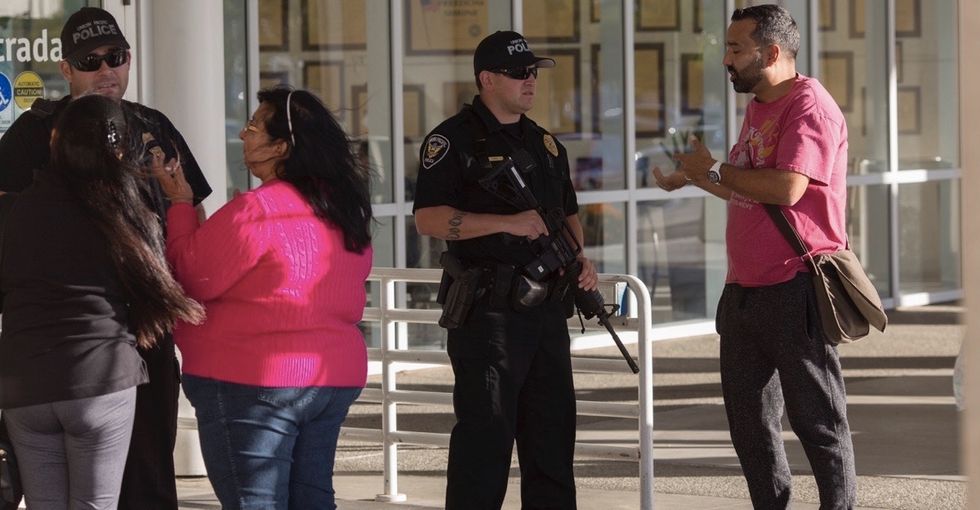 In the aftermath of yesterday's mass shooting in San Bernardino, numerous elected officials responded to the tragedy by offering their "thoughts and prayers."

The tweets, largely by Republican politicians, sparked a heated debate online about the worth (or worthlessness) of prayer as a response to mass shootings, particularly from elected officials and presidential candidates who have taken no legislative action on gun control.

The media backlash to their tweets was swift.

But none was as bold and controversial as the NY Daily News, who released this as their cover for today:

The meaning of the headline is clear.

There is something so disrespectful, so empty, so infuriating about people invoking God as a platitude while abdicating all responsibility for their contribution to the current reality and denying their power — and responsibility — to change it.

And to add insult to injury, many of those same politicians sending thoughts and prayers received donations from the NRA, actively working to block gun control legislation.

As a person of faith, when I saw the cover and the many people who tweeted various versions of "Don't pray. Act." I cringed.

No, I am not waiting on a mystical, magical being to fly down from the sky on a chariot and fling all the guns into the flames of hell (although, God, if you're reading this and you ever want to really show off...).

I cringed because those politicians had made a mockery of prayer and reinforced a terrible myth about faith: that it is a comfortable and easy excuse for inaction. For most people I know, prayer does not in any way replace action. Prayer is, in fact, when I am most compelled and convicted to do more — to do the bold thing, the hard thing, the right thing.

It is my private preparation with God before going out into the world and doing the work that can seem futile, but can only be done through me, with my hands, with my voice, and with my vote.

So, yes. I prayed after yesterday's shooting.

Not sure it's what the Republican presidential candidates had in mind, but here is what I said:

I know that my feelings today pale in comparison to the those whose loved ones didn't come home today. Or yesterday. Or any day that precious lives are snatched by gun violence.

My heart breaks for them. But also I am tired. I am afraid. I am baffled. And I am angry.

Let me not be so consumed by those emotions that I become just another cynical, broken person in a world of cynical, broken people, feeling overwhelmed and resigned, spewing mindless chatter that helps no one and changes nothing.

Help me not feel powerless. That is not who I was created to be.

Even when it doesn't feel or look like it, I need to know I have the power to bend the arc of history toward justice, safety and life.

To tell you the truth, God, I don't always believe that I do. Sometimes it feels that today's challenges are too complex, too deeply rooted; that hatred, sickness, fear, and death will continue to win; and that goodness, integrity, lov,e and common sense will continue to lose.

But you know what? Let this prayer be my repentance.

I am sorry for doubting my power. And because repentance literally means "to turn away from sin," this isn't just an apology — true repentance is an apology with commitment.

So let this prayer also be my commitment to the following:

I will never again miss an opportunity to politically and economically harm the "leaders" who allow this. I will faithfully make them pay for their cowardice, moral bankruptcy, and utter failure to serve us. It won't just be out of pure spite or malice for the blood that is on their hands (I know you don't want me to be spiteful or malicious), but isn't that how democracy works?

I will add more offline work to my online activism. I'll show up more with my body, not just my heart and my Wi-Fi.

I will pay more attention to where my money goes and work harder to make sure that it doesn't go into the hands of those who stand in the way of gun control legislation or those who continue to spew hate-filled rhetoric and lies.

And I will never again doubt that we can change the system that fosters and protects hatred, sickness, fear, and death.

But as I commit to those things, here is what I am asking of you, God:

When I am tired of thinking about this, when I want to turn off the TV and pretend that this didn't happen, when I want to forget about it until the next shooting, I ask that you prick my heart. Make me remember.

Make me feel the pain so sharply that I can't ignore it and I can't just walk away and move on, because it is that kind of nagging pain that sustains passion.

Please strengthen me as I use not just my passion but everything that I have — my voice, my money, my access, my political agency — to fight, and help me to make wise decisions in how I devote each of those things to be most effective.

Thank you for the mind, feet, and hands that you gave me to do the work. I won't deny the enormity of the job that you have equipped me — and all of us — to do. But I know that we who are good, we who stand on the side of love, life, and peace — we with our righteous anger — we can and will stop this.