'We the People' updates Shepard Fairey's 2008 'Hope' poster for the Trump years.

No matter who is in office, hope and change will always be possible. 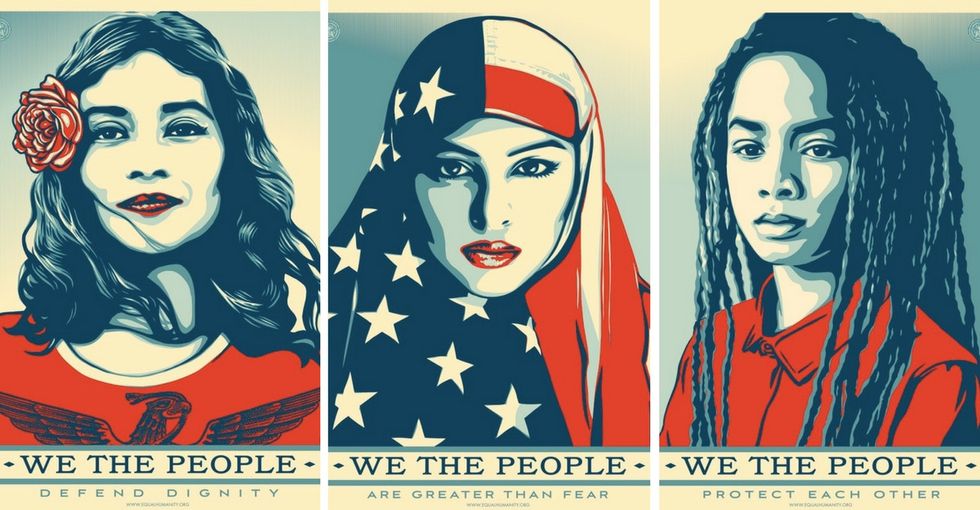 Artist Shepard Fairey's "Hope" poster is, perhaps, one of the defining images from the 2008 campaign to elect President Barack Obama.

The image, as ubiquitous in 2008 as Donald Trump's red "Make America Great Again" caps were in 2016, inspired optimism for a world no longer defined by political party. Red and blue, the poster signaled a desire for our politicians to work together for a common good. The global recession had just begun, and it would take teamwork from individuals across the political spectrum to help us recover.

Fairey and five other artists recently teamed up with The Amplifier Foundation to share a new political message for 2017 and beyond, this time no longer centered on any one politician.

The project, which debuts on Inauguration Day, is titled "We the People" and grapples with the role we play as individuals and groups to stand up for each other. The poster series features work by Fairey as well as Colombian-American muralist Jessica Sabogal, Los Angeles artist Ernesto Yerena, photographer Delphine Diallo, multimedia artist Arlene Mejorado, and Ridwan Adhami.

The Amplifier Foundation's mission is to raise the voices of grassroots movements through art and community engagement.

On Inauguration Day, the group will take out full-page ads in The Washington Post and distribute copies of the posters throughout D.C.

The message of the series is centered around a feeling of shared humanity and a responsibility to be our best selves in how we treat ourselves and others. The people depicted in the images come from a wide range of backgrounds. The goal is to inspire the viewer to empathize with the subject, no matter how much or how little we may truly have in common with them.

"Anyone that looks at these images can see some amazing humanity in them," said Fairey in an Amplifier Foundation statement. "I couldn’t do anything to compromise this person’s quality of life, any of these people’s quality of life, without it hurting a part of me. I see myself in them."

As Inauguration Day approaches, it's becoming clear that "we, the people" might be the only thing standing in Trump's way.

From his fiery and often xenophobic campaign rhetoric to his scandal-plagued personal life, Trump's presidential bid flew in stark contrast to everything we've come to expect from elected officials. Countless times, he's stumbled into situations that would have ended campaigns or inspired resignations — and yet, to the shock and horror of many, he emerged victorious.

In the election's wake, a sense of hopelessness hangs over the nation — a shared feeling of despair. In the past, we've looked to individual politicians to save us from the threat of demagogues. To millions of Americans, Obama was that man, that leader. If there's one thing we can learn from Trump's rise, however, it's that perhaps it's time to expel the idea that any one person can protect democracy.

Perhaps instead we look both inward and around. For the next several years, we must instead put our faith in we, the people.

But what does "We the People" even mean?

Yes, those are the first three words of our Constitution, but there's a deeper message to be considered.

"We the People will no longer be exiled, excluded, or eliminated from our America," said Sabogal in Amplifier's statement. As someone whose existence encompasses multiple intersections of oppression — being Colombian and being a lesbian — Sabogal feels as though those three words didn't always apply to her.

To get through the next few years, we'll need more than slogans. "Love Trumps Hate" is a great message — so long as we fight for a world in which love does, in fact, overcome hate. "Hope" and "Change" can only happen if we put in the work needed to change the world. "We the People" can overcome adversity only if we band together.

"During the Bush years, the most prominent voices were those of fear and negativity," Fairey added. "Creating the 'Hope' poster for me was to say, 'Use your voice in a constructive positive way.' There’s a lot more out there than fear, and if we all use our voices we can rise above it."

It's on all of us to make the world a better place. It's up to us what direction this country and this world moves. Do we fight for inclusion, or do we stand down in the name of fear?