Tidying up can do more than 'spark joy.' It can help your kids be academic rockstars. 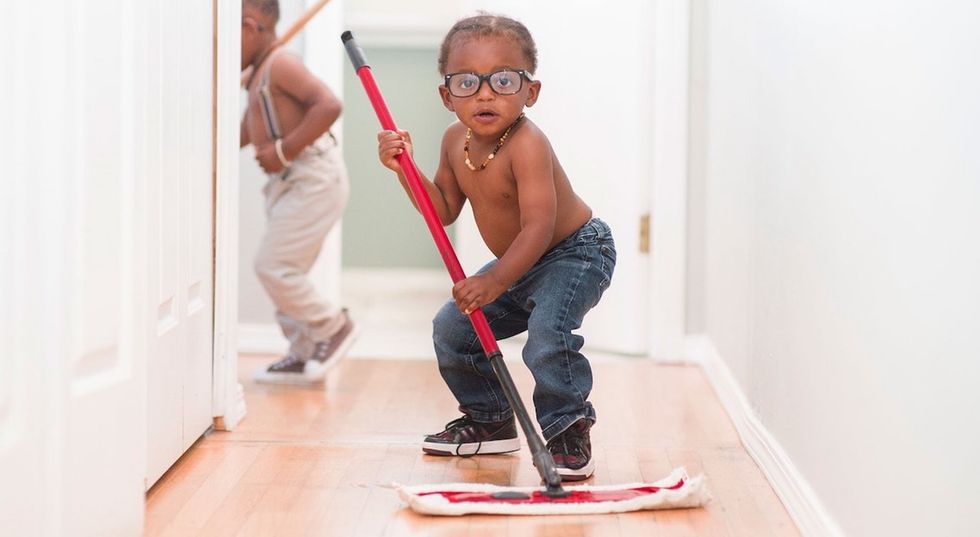 Let's face it, cleaning your house can be a pain, but the after effects come with way more benefits than you might realize.

I know, I know, even the word "clean" probably just made you groan aloud. And it's not like you haven't meant to get your living room, bedroom, kids' rooms, and office sorted. In fact, you've probably watched the entire Marie Kondo series on Netflix and thought: "my family's definitely going to do that this year."

If you've been putting off tidying up though, here's something to think about: cleaning up your space won't just make you feel better, it sets up your kids for success in school.

Research shows that keeping a tidy house has a positive effect on kids' productivity and learning.

Photo by Santi Vedrí on Unsplash.

A 2001 study conducted at The University of Michigan followed kids from school-age to adulthood and found that kids whose homes were rated "clean," were far more likely to do well in school and earn more money in adulthood.

That's because "Keeping a clean and organized home reflects an overall ability and desire to maintain a sense of order in a wide range of life activities," Rachel Dunifon, the head author of the study, wrote.

More recently, research out of Princeton and UCLA has provided evidence that clutter in the home is a deterrent when it comes to living our best lives. Because our brains can only focus on so much information at once, the presence of mess in the home can pull focus, leading to both distraction and stress. And that goes double for kids, who are just learning to focus.

"The area of the brain responsible for organization, planning, and working memory [among other things], does not become fully consolidated until around age 25," explains Merriam Sarcia Saunders, a psychotherapist and expert in the treatment of ADHD.

"That means children don't have a ready access to the ability to organize. They must look to the adults in their life to scaffold that ability and teach those skills until the child can begin to generalize them into their daily routine."

If the adults don't step up to teach their children these valuable skills, children likely won't pick them on their own.

This is not to say that your house always has to be sparkling. Life happens, and often makes that impossible. But a home that's disorganized on the regular can lead to problems.

Even the cleanest homes can get disorganized. Not making decluttering a priority, however, can create problems in the long run.

"A disorganized environment with clutter strewn about could be quite over-stimulating for a child," Saunders explains.

It can make it difficult for kids to concentrate, settle down, or even fall asleep at night. And if a child lives in a home that's disorganized enough that they can't find their things, they may feel lost and out-of-place on a larger scale.

"The constant inability to find necessary things like matching socks, clean clothes, that second shoe, a cherished toy or perhaps important documents like homework and permission slips, can increase stress hormones to a chronic level," adds Saunders. "At the least, it can ultimately cause a child to simply stop trying as they can never find what they need."

However, you can begin giving your kids the tools they need to succeed in life by making them an integral part of keeping the house comfortable and organized.

Children, Saunders points out, learn by watching others and then doing themselves. So when parents involve their kids in the cleaning process they're learning what to strive for.

"A clutter-free environment allows for better focus, which can lead to increased creativity and productivity," she explains. "Organization and routines, especially for children, provide a sense of structure which is calming, and often leads to better habits for eating and sleeping."

Ready to get that house clean? Here are just a few tips that will help you help your kids have a surefire chance at a better academic life.

Image by StockSnap on Pixabay.

The first thing you might need to do is lower your expectations just a little, Saunders explains. While many parents tell their kids to "clean your room," it's important to understand that children are likely to have no idea what that actually means. And if they've never had a truly organized room before, it may be asking too much too quickly. Organization is a skill. And that means it's got to be practiced in order to become second nature.

Start by working with your kids to organize their toys in clear plastic bins, Saunders advises. Put clothes in baskets. If your kids can see where their things are supposed to go, they'll be more likely to put them away. If your children are young, consider labeling each bin and basket with pictures. And consider getting rid of things that your kids may not like or rarely use. Less toys doesn't mean less creativity!

"Once the room is clean, ask them to put away just one, tiny thing — a pair of socks, a belt, one toy — and praise them for a job well done," Saunders adds.

"The next day, organize the room again, and this time ask your child to put away two things. Add one thing each day, remembering to praise, until the task no longer feels overwhelming."

This will give children a sense of accomplishment and pride. And it's a nice way to teach them that they have control over some things, as well.

No matter how stressful life can get outside the house, coming home will make them feel calmer and less anxious. And that's a good thing when it comes to sitting down to do homework.

Image by nastya_gepp on Pixabay.

The calm of clean may even set your kids on a path to helping others. Jayera Griffin, a 14-year-old from Chicago, for example, has started a program called Free Laundry Day. With the help from her local laundromat and Clorox—as part of their What Comes Next Project—she's made it possible for people in her community to get their laundry washed for free every week.

No doubt her drive to give back in this way started in a clean home.

But no matter what your children's future looks like, it's sure to be brighter if they have a clean place to come home to every day.

From Your Site Articles
Pets