Thomas Jefferson once wrote that black people are inferior to whites. Here's my response. 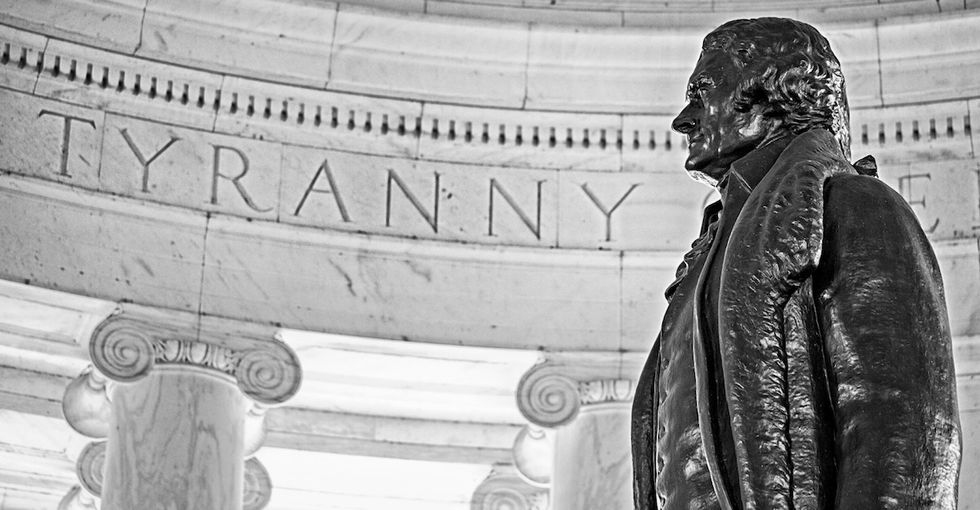 In my American history class, I heard lots of stories about the men who founded this country.

I was taught that men like George Washington, Thomas Jefferson, and James Madison personified the best of what our country had to offer. They saved us from imperialistic rule in order to build a country predicated on freedom.

Our Founding Fathers. Photo via iStock.

They made America what it is today.

But what I didn't know: 12 presidents of the United States owned slaves, eight of those while they were in office.

This poem is my letter to the first five of them:

Letter to five of the presidents who owned slaves while they were in office.

George Washington—when you won the revolution how many of your soldiers did you send from the battlefield to the cotton field? How many had to trade in their rifles for plows? Can you blame the slaves who ran away to fight for the British because at least the Redcoats were honest about their oppression?

Thomas Jefferson—when you told Sally Hemings that you would free her children if she remained your mistress did you think there was honor in your ultimatum? Did you think that we wouldn’t be able to recognize the assault in your signature? Does raping your slave when you disguise it as bribery make it less of a crime? When you wrote the Declaration of Independence did you ever intend for black people to have freedom over their bodies?

James Madison—when you wrote to Congress that black people count as three-fifths of a person how long did you have to look at your slaves to figure out the math? Was it easy to chop them? Did you think they’d be happy being more than half human?

James Monroe—when you proposed sending slaves back to Africa, did black bodies feel like rented tools? When you branded them did the scars on their chest include an expiration date? When you named the country Liberia, were you trying to be ironic? Does this really count as liberation?

Andrew Jackson—was the Trail of Tears not enough for you? Was killing Cherokee, Choctaw, Creeks, and Seminoles not enough to quench your imperialism? How many brown bodies do you have to bulldoze before you can call it “progress”?

Mr. Washington, Jefferson, Madison, Monroe, Jackson—when you put your hand on the bible and swore to protect this country let’s be honest in who you were talking about. When the first Independence Day fireworks set the sky aflame, don’t forget where we were watching from.

My entire life I have been taught how perfect this country was. But no one ever told me about the pages torn out of my textbooks. How black and brown bodies have been bludgeoned for three centuries, but find no place in the curriculum.

Oppression doesn’t disappear just because you decided not to teach us that chapter. If you only hear one side of the story, at some point you have to question who the writer is.

What we learn in our history classes doesn’t tell us the full story of our country’s relationship with race.

Take Jefferson, for example. In his book, "Notes on the State of Virginia," our third president wrote that black people were "inferior to the whites in the endowment both of body and mind" and "that in imagination, they are dull, tasteless, and anomalous."

Yes, Jefferson was an American leader ... but he was also a slave owner. Photo via iStock.

He wrote that black men did not have the capacity to sustain complex emotions. And he also believed that black people did not possess the creative or intellectual acumen to create art, writing that Phyllis Wheatley (who is considered to be the first published black American poet) produced work that was "below the dignity of criticism."

Jefferson, in large part, serves as a microcosm for how American history is often taught — myopic, one-dimensional, and not illuminative of the whole truth of our nation’s past. We need to more seriously grapple with the complicated, and often contradictory, parts of our history if we want to be more honest about how we can effectively move forward.

We are in the midst of a moment where the conversation around race in this country has been brought to the forefront of our political discourse — as it should be.

The problem, however, is that if we don’t understand the historical context that has shaped our contemporary racial dynamics, then we can’t fully understand the totality of the problem, and thus we risk misdiagnosing the solution.