This NBA team stood up to homophobia big time last night with a tribute to Pulse victims. 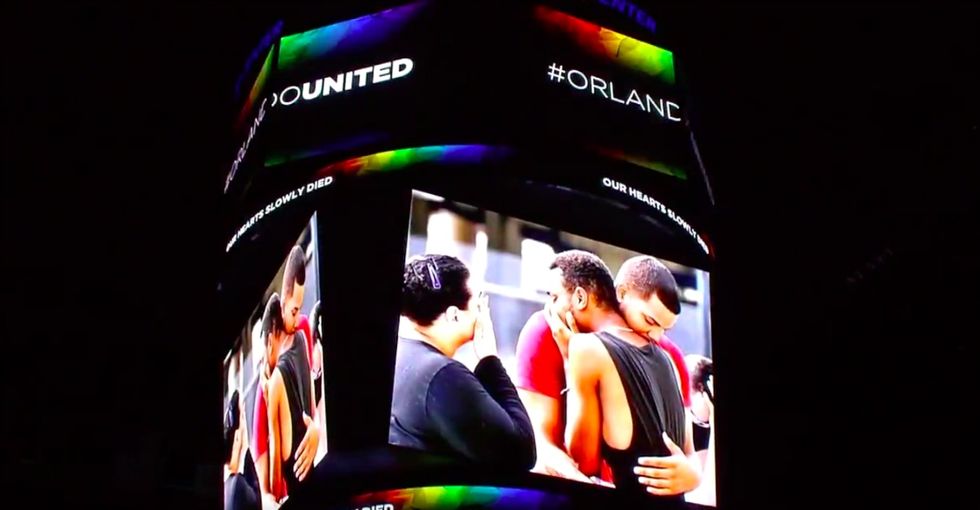 On June 12, 2016, the worst mass shooting in U.S. history took place at Pulse, a prominent LGBTQ nightclub in Orlando, Florida.

The tragedy rocked the entire country (and world). But it was especially devastating to the Orlando community.

It was a day that won't soon be forgotten in central Florida.

More than four months later — and just two miles down the road from where the atrocity took place — the NBA's Orlando Magic dedicated its season opener on Oct. 26, 2016, to those who lost their lives this past summer.

"I couldn’t be more proud of this community,’’ said Magic CEO Alex Martins of Orlando's coming together in the months since. "I will be shocked if there’s a dry eye in the audience tonight."

Performer Brandon Parsons sang “Forty-Nine Times,” a heart-wrenching song dedicated to the 49 victims of the shooting.

“Tonight, we honor their lives, the heroes who emerged that early morning, and a healing community that showed the world love always conquers hate,” the team's announcer told the filled stadium.

A rainbow-colored banner, printed with the number 49 and all the names of those who were killed, hung from the rafters.

"It will be our way of making sure that we don’t forget those who lost their lives in this tragedy," Martins said of the colorful banner.

Magic fans used the #OrlandoUnited hashtag on social media to share how the pre-game events went far beyond basketball.

Some times it is important to be reminded of what really matters in life. Give your love ones an extra hug and kiss tonight. #OrlandoUnited
— Keith Smith (@Keith Smith)1477523588.0

Since June, the Orlando Magic have stood with other local athletic groups in solidarity with Pulse and the city's LGBTQ community.

In the aftermath of the shooting, the Magic — along with Orlando City Soccer Club and the Orlando Solar Bears ice hockey team — funneled millions of dollars into the OneOrlando Fund, which is aiding victims' families and survivors during their time of recovery.

Between the Magic organization and the DeVos family, which owns the team, $500,000 was given to the charitable fund.

Last night's dedication was particularly moving because it showed a pro sports team proudly standing alongside the LGBTQ community.

Homophobia and transphobia in sports are still very real, especially in the U.S. That's why groups like Athlete Ally are so critical — they combat the various forms of discrimination queer men and women face in locker rooms and on athletic courts everywhere.

It's an injustice many athletes, like retired NBA player Jason Collins, know all too well.

"I want to do the right thing and not hide anymore," Collins, who was the first NBA player to come out as gay in 2013, said of his decision to live openly. "I want to march for tolerance, acceptance and understanding. I want to take a stand and say, 'Me, too.'"

In Florida, #OrlandoUnited has proven to be so much more than a catchy hashtag.

It's reflective of a community that gets why we all hurt when one group hurts. When one family mourns, we all bear the pain.

And when we heal together, it shows why no amount of hate — or bigotry, or some warped idea of morality — can prevent love from conquering hate.