This live marriage proposal is the only reason the Emmys should exist. 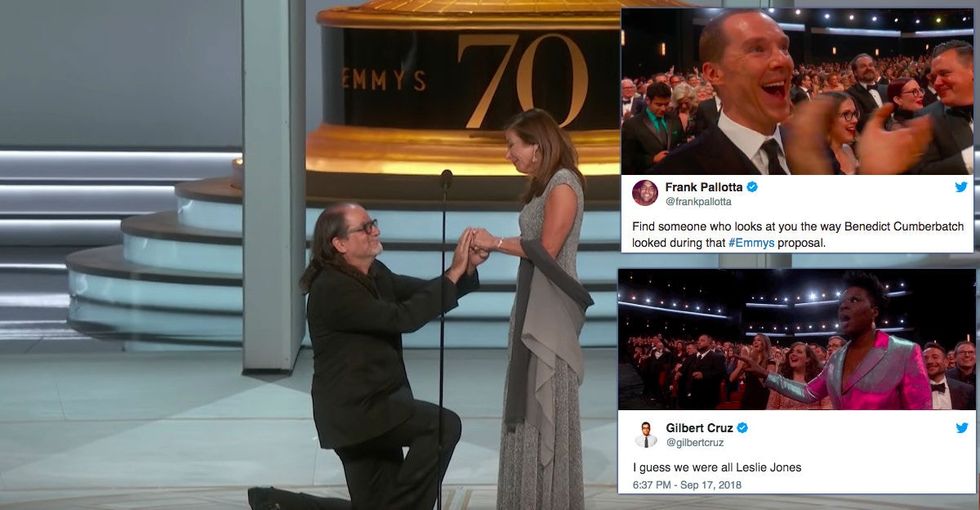 Here's an unpopular opinion: There are very few reasons to watch an awards show.

They last too long, none of us have any idea who most of the people are, and no matter how much soda (or white wine) you've drunk, the ratio of commercials to the times you have to actually take a break are woefully out of whack.

The Oscars. The Golden Globes. The VMAs. It's all the same. And in your heart you know it to be true!

One special moment made the 2018 Emmys just a little bit different.

If you haven't seen it — and considering my first paragraph, I'm not going to blame you — let me break down what happened down before we both dissolve into happy tears at our computers.

When Glenn Weiss, a man who has won more Emmys than most of us have fingers (12) went up to accept another statuette for his directing of the most recent Oscars ceremony, he opened his speech by thanking his mother, who passed away only two weeks ago.

“Part of my heart is broken,” Weiss said. “I don’t think it will ever be repaired.”

Then Weiss flipped the script on the usual awards show fodder. For the first time in Emmys history, the acceptance speech turned into a surprise proposal.

“Mom always believed in finding the sunshine in things and she adored my girlfriend Jan [Svendsen]," Weiss said.

“Jan, you are the sunshine in my life,” he added. “And mom was right, don’t ever let go of your sunshine. You wonder why I don’t like to call you my girlfriend? Because I want to call you my wife.”

The reaction? This GIF of Leslie Jones pretty much says it all, doesn't it?

Ready for the actual moment? I hope you've got your preferred brand of tissues ready. (Spoiler alert: She said yes!!)

This is all of us right now:

Find someone who looks at you the way Benedict Cumberbatch looked during that #Emmys proposal. https://t.co/gWnAQVt4l1
— Frank Pallotta (@Frank Pallotta)1537234704.0

Weiss and Svendsen have been together for more than a decade. And he'd kept the proposal under wraps from everyone but his father.

In a backstage interview, Svendsen said she'd hoped Weiss would dedicate his award to his mother. “He did, and then some," she said.

Weiss, who'd proposed with his late mother's ring, said "Now it's where it belongs."

Someone's going to have to go even bigger next year!