This kid's one-minute speech puts the cost of gun violence in a gripping new light. 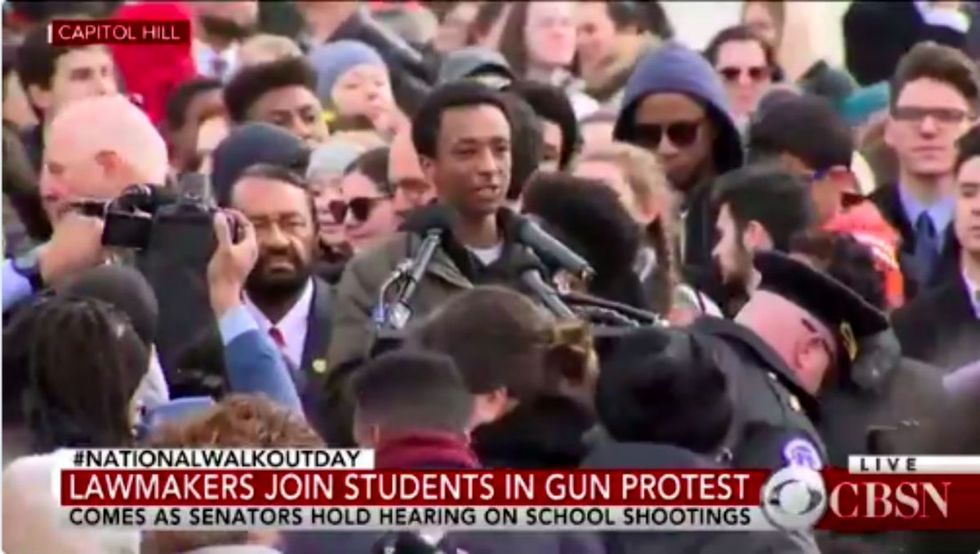 #NationalWalkoutDay was an incredible statement from students across the country. But we shouldn't have needed to have one in the first place.

We've heard horrifying stories of those whose lives were taken away by gun violence. And we need to hear those stories. But one student speaking near Capitol Hill in Washington, D.C., eloquently reminded us on the day of the walkout that the world would have been far better off if those stories never had to exist at all:

"In an ideal world, the 20 first-graders and kindergartners who died at Sandy Hook would be in middle school today. ... The 32 students who died at Virginia Tech would be employed professionals, and the 17 victims from Stoneman Douglas would probably be eating lunch at school right now, and the only thing they'd be worrying about is a test for next period."

Those remarks given by student Michael Soloman are a heartbreaking reminder that the everyday, often mundane tasks we take for granted would be a blessing for the victims and families of those directly affected by gun violence.

Powerful speech wow. "In an ideal world, the twenty 1st graders & kindergartners who died at Sandy Hook would be i… https://t.co/J7swXQujHy
— Erick Fernandez (@Erick Fernandez)1521047173.0

Soloman's remarks are a powerful reminder not only of loss but what will never be.

Seeing the faces and names of those who have lost is an important reminder, but this particular speech is equally important in the sense that it flips the equation to articulate not only what was lost but what could have been.

"Personally, I'm proud to take part in a nationwide movement like the one we're participating in today," he said. "But we can all agree in that in an ideal world, none of us would be here."

We'll never know what these kids and young adults could have been if their lives hadn't been stolen from them. Some might have gone on to do great things. But even for those who simply led "average" lives, the impact is profound when put into a relatable context.

Photo by Timothy A. Clary/Getty Images.

Every student's life has been changed by the reality of gun violence, and millions who may never face a massacre must still grapple with its possibility.

It's becoming an increasingly normal practice for students to take part in school shooting drills. While there's obviously nothing as terrible as being a victim of gun violence, the mere fact that millions of students across the country must now seriously consider the possibility that they too could face a similar fate is an epidemic in its own right.

"Unfortunately, we live in a country where lawmakers are more concerned about their contributions from the NRA than they are about the lives of their own constituents," Soloman said to the crowd.

Generations of students before them have faced other daily threats, like nuclear war. Something like that is a very real, existential threat but one that probably feels more like a far-off idea. Gun violence, on the other hand, is something all too real and present in our lives today.

Pausing to weigh the lost potential of victims is a powerful reminder that everyone deserves the opportunity to live their fullest lives, something the threat of gun violence takes away from anyone it impacts.

We'll be hearing a lot from students, parents, teachers, and politicians about the need to curb violence in the coming days. That's very important. What we saw today is what our lives could be like in a world where we didn't have to spend any time worrying about the issue. The chance to be kids, regular students with regular problems and potential, is a right no one should be denied.