This gay senior’s touching story reminds us that LGBTQ people have always been here. 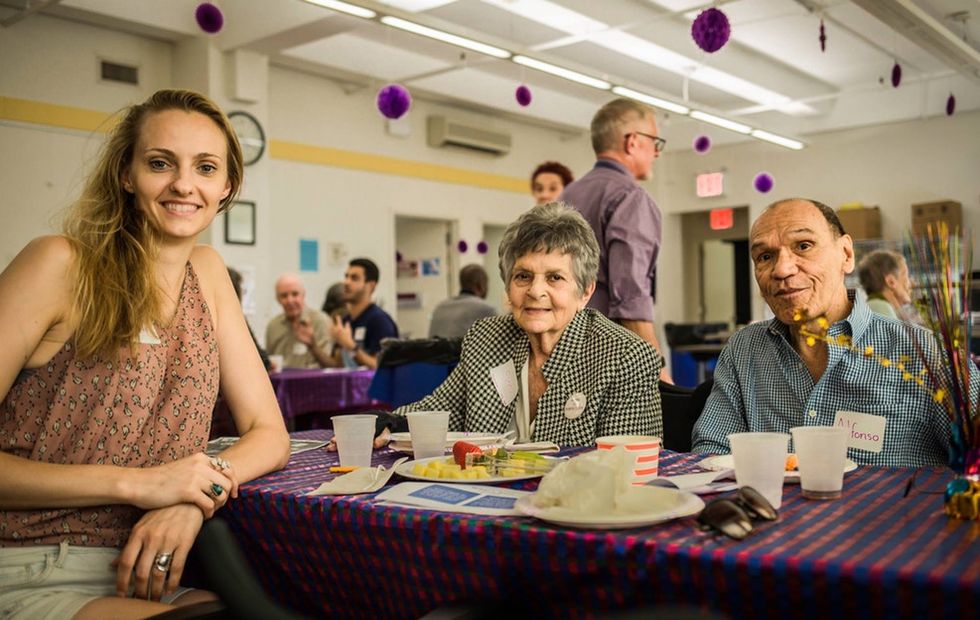 From an outside perspective, Sandy Warsaw's life looked like any other woman's in the mid 20th Century.

She grew up in Westchester Country, went to Vassar College in 1950, graduated four years later, got married to a man a year after that, and, in no time at all, they had two children.

"You were supposed to get married and have children and live happily ever after," says Warsaw. "That was drilled into us, so you didn’t think of any other context."

Her mother also made it clear to her that gay people were not acceptable as friends, much less as family members. When Warsaw went to camp as a young girl, her mother would always warn her to "stay away from the lesbians."

So Warsaw kept up her straight facade for the entire first half of her life — that is, until she finally divorced her husband and began to have relationships with women.

However, because many people weren't tolerant of this "alternative lifestyle," Warsaw kept these relationships hidden from her family for several years.

During that time, she mainly had beginnings of relationships with women who were often still married to men, and thus unwilling to get serious for fear of disrupting their status quo.

However, in the late 1970s, after she had been divorced for several years, she found reciprocal love with a woman for the first time in her apartment complex in New York City.

That relationship carried on for eight years, but it ended when Warsaw became a grandmother. She believes her partner was uncomfortable with the idea of being with a woman who had grandchildren because she was 11 years younger than Warsaw and didn't want to feel old.

Needless to say, the separation took a toll on her.

She had a couple other relationships after that, but she continued to keep them from her kids until the early 1990s, when she finally decided to come out to them. She'd gotten used to keeping that part of her life separate from them, but a conversation with a cousin led her to believe they might already know, so she felt it was time. She also thinks she was waiting until her mother had passed away, because she knew coming out to her would not have gone over well.

Much to her surprise, her kids told her they'd known all along, and were just waiting for her to talk to them about it, but it still "was not a terribly easy conversation," says Warsaw. Her daughter felt like her mother had lied to her all these years by keeping this secret and maintaining an almost completely separate life.

While certainly uncomfortable, Warsaw recognizes her coming out story wasn't nearly as traumatic as what other LGBTQ people her age experienced.

“There are people from my generation who were kicked out of their families. There were people of my age who weren’t allowed to see their grandkids. I didn’t have that," she says.

Even though she didn't go through that level of trauma, Warsaw felt that she could still use a support system. So she joined a gay and lesbian synagogue.

It was really the first time that she had interacted with a group of out lesbians. And while she did feel the camaraderie helped, she again felt like she had to hide an aspect of her life, because she was afraid of being judged for having been in the closet for so long. Still the benefits to such an inclusive group eventually outweighed the drawbacks, and slowly but surely Warsaw became quite active in the LGBTQ community.

So she decided to start working for Sage — a national nonprofit that advocates for LGBTQ elders.

#PrideMonth was a perfect way to celebrate SAGE's #40FierceYears! Here are some of our fave shots from #NYCPride. 🌈🌈🌈

It was at Sage that Warsaw's drive to make a positive impact on her community really kicked into high gear.

"My father used to say, 'you get up in the morning, you wash your face, you brush your teeth, and you work for your community,' so that was built into me from an early age," notes Warsaw.

She became their first Director of Advocacy, Education, and Training, which meant she taught other members "how to define an issue, how to talk about it in three minutes, and how to take it up to the legislature in Albany."

In that role, she worked on fighting LGBTQ discrimination against adoption, discrimination in longterm care facilities, and in medical facilities just to name a few. She also advocated for the recognition of seniors in the LGBTQ community, because ageism creates a whole other barrier.  All these things are still prevalent and technically legal, so it takes people like her to stand up for her community members' rights.

Since seniors tend to be quieter in public spheres like Facebook and Twitter, they can often get left behind in LGBTQ advocacy. That's why people like Warsaw make it their prerogative to be more vocal on their behalf.

Loving the @nytimes #Lens piece from @kdswanger about her two moms! Such a heartwarming family. We are everywhere ❤️🌈 #LGBT #LGBTAging #LGBTQ #SGL #LoveIsLove #TwoMoms

While the work was full of challenges, it fueled Warsaw.

"It's always fulfilling when you can take a problem, define it, find the people who are responsible for making it better, and see it get better," she says.

America's taken huge steps forward in terms of LGBTQ rights over the last few decades, but, Warsaw says, there's still lots of work to be done.

Despite being legally married, LGBTQ couples regularly face judgement and intolerance from local businesses, neighbors, and their own families. What's more, with a new Supreme Court judge, it's possible the marriage equality amendment could be reversed, and all this progress will ebb away.

As a result, "[LGBTQ] people are going back to being more cautious, having more fear and anxiety," says Warsaw.

However, in the midst of all this uncertainty and divisiveness, if more people align with the LGBTQ community, she truly believes discrimination will abate. After all, she grew up in a time when no one ever talked about being gay, and now she's giving public speeches about it.

As long as there are people pushing for rights and recognition, genuine equality in the country is possible.