This 18-year-old is showing kids how to save the world, one small project at a time. 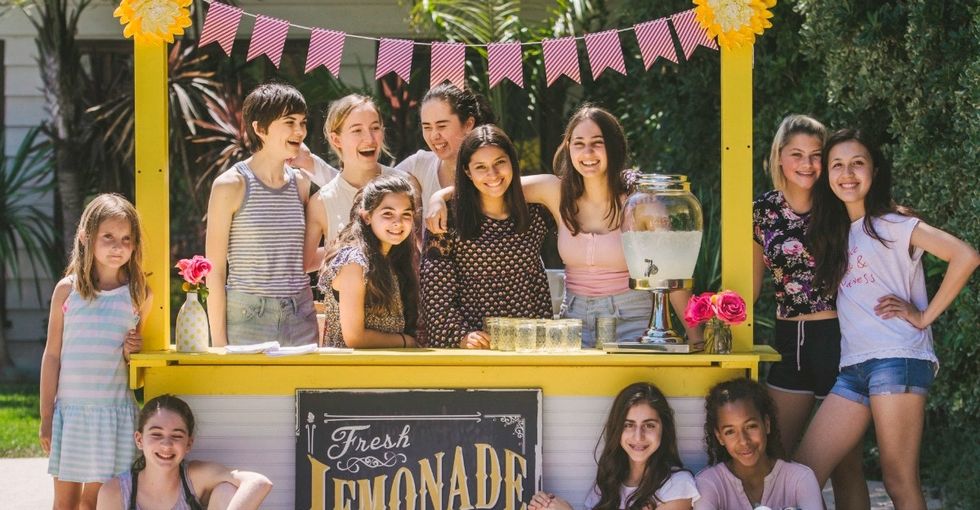 When Lulu Cerone was growing up, her family had a lemon tree in their backyard.  So, naturally, she set up lots of lemonade stands.

At first, she and her friends would use the money to buy little pleasures, like toys or candy. But when Lulu turned seven, she decided to do something more significant. Instead of spending their lemonade money, Lulu and her friends gave it to a local dog shelter, which upped the ante on their simple pastime in a big way.

"We realized that adding an element of social good to this social activity not only helped some dogs, it made it way more fun and meaningful," writes Lulu in an email.

My first lemonade stand for charity. With Erin and Kaitlyn. MLK Day of Service 2009

But that was just the beginning.

Soon after, Lulu started researching other causes and stumbled upon Blood:Water — a nonprofit that seeks to end the HIV/AIDS and water crises in Africa. On their website, she learned that $1 can provide one person in Africa with clean water for an entire year.

"It never occurred to me that people didn't have access to water — a basic human need I totally took for granted," Lulu writes.

What hit her hardest was that girls her age had to walk miles just to get water that was dirty and might make them sick while the boys went to school.

So Lulu's lemonade stand profits started going toward providing clean water to people in Africa. Then, in 2010, the philanthropic game changed again.

When Haiti was struck by that devastating earthquake, Lulu and her friends decided to throw down a boys-versus-girls fundraising competition for Lulu's entire fifth-grade class. The idea was so catchy, it grew to other nearby schools, and soon they were getting donations from all over the city. After just two weeks, they had collected over $4,000.

The experience was so exciting and unifying, the kids were chomping at the bit for more.

"This event showed us how empowering it was to realize that we already had the skills to create tangible good in the world," Lulu explains. "We didn't have to wait till we were adults."

And like that, her nonprofit, LemonAID Warriors, was born.

LemonAID Warriors provides teens and young adults with the tools they need to infuse social good efforts into their social lives.

Since there's no shortage of causes that need attention today, they're constantly offering new and exciting ways to lend a hand. It all started with Lulu's concept of a PhilanthroParty, which is essentially a social gathering centered around a social good concept.

One of Lulu's (center) PhilanthroParties. Photo by Renee Bowen.

The projects they supported in March 2018 include completing a dormitory at an orphanage in Tijuana and designing shirts for the March for Our Lives. Their ongoing work includes providing scholarships for children at a school in Zimbabwe and, of course, funding sustainable, clean water, hygiene, and sanitation projects with Blood:Water, which is now their partner.

What started out as a lemonade stand has grown into a wildly successful nonprofit that's raised over $150,000 for people in need. And Lulu's activism is the keystone of it all.

Lulu visiting a school in Uganda. Photo by Renee Bowen.

At age 13, she was sharing social good action plans with the heads of Mattel. Soon after, she flew to Uganda to visit some of the water projects the Warriors helped fund. At 15, she won a Nickelodeon Halo Award and wrote her first book, "PhilanthroParties! A Party-Planning Guide for Kids Who Want to Give Back." Now, at 18, she's one of L'Oreal Paris' Women of Worth honorees.

There's no telling what other amazing things this world's going to see from Lulu Cerone.

But for Lulu, it all comes back to inspiring her peers and the next generation to take up the gauntlet of this grassroots-style activism.

"I feel we will be most effective if we are able to implement simple, realistic habits that make social-good a routine in our lives," Lulu explains. "My grassroots method doesn't add to your busy life — it turns what's already on your calendar into a chance to become an agent of change."

Starting with small, manageable actions is how Lulu got to be where she is today. It's these little, bold steps that lead to gigantic accomplishments. She also suggests looking to a mentor to help guide you. It's about following good examples and then, when you feel like you have guidance of your own to offer, giving back to those coming up behind you.

Speaking of which, Lulu's 14-year-old mentee, Madi Stein, is now the president of LemonAID Warriors. It just goes to show that you never know where social good pursuits might lead you.