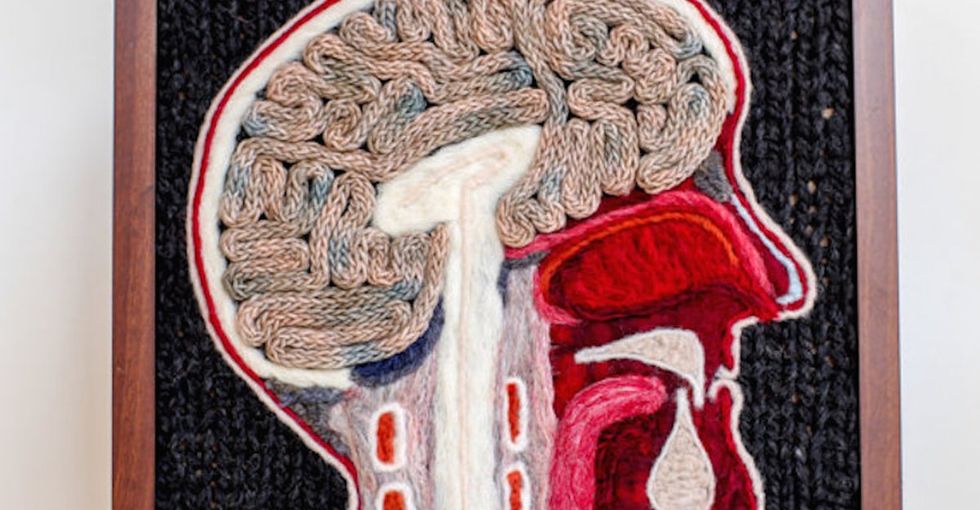 Remember the first time you had to dissect an animal in biology class?

I do. For me, it was a frog. And what I remember most was the terrible smell. I may have learned about (and subsequently forgotten) a frog's insides. But I also learned that anatomy was not the academic focus for me.

I probably would have felt a lot differently about the whole thing, though, if my biology lab had involved one of Emily Stoneking's cuddly creatures.

The animals are a lot nicer to look at than your typical formaldehyde-soaked dissection specimen. Plus, they offer a great alternative to dissecting animals. (According to Last Chance for Animals, over 6 million animals are killed each year so that they can be dissected.)

“The real deal [of dissection] is pretty messy and there are not a lot of distinct colors, and I want it to look more like an anatomical illustration," Emily said to Bored Panda, though she admits the creatures' innards aren't completely anatomically correct.

“What I wanted to do is create an homage to science and the artists who illustrated the work of past anatomists," Emily told Upworthy. “I wanted to create a piece of art where the dichotomy between gross and weird and cuddly and familiar would maybe make people stop and appreciate anatomy in a different or new way."

Emily sells animals like this frog, which she calls "the iconic image of high school biology class."

It's much cuter than the one I vivisected in eighth grade.

All photos from Emily's Etsy shop, used with permission.

The rat also comes in a vegan version with yarn made from cotton and other plant fibers.

And this awesome brain, complete with a knitted neuron:

These woolen animals and anatomy parts are awesome conversation pieces to hang on your wall, but they're also practical. After you examine your little buddy's organs, you can remove the pins and take your lab animal off the dissection table for a cuddle sesh. They're part stuffed animal, part science project.

Arguably even cooler? If you want to, you can learn about anatomy while you learn how to knit, too. Emily sells her knitting patterns and DIY kits for making your own cute, dissectible animal.