These 6 orgs are making sure freedom and justice are for all Americans. 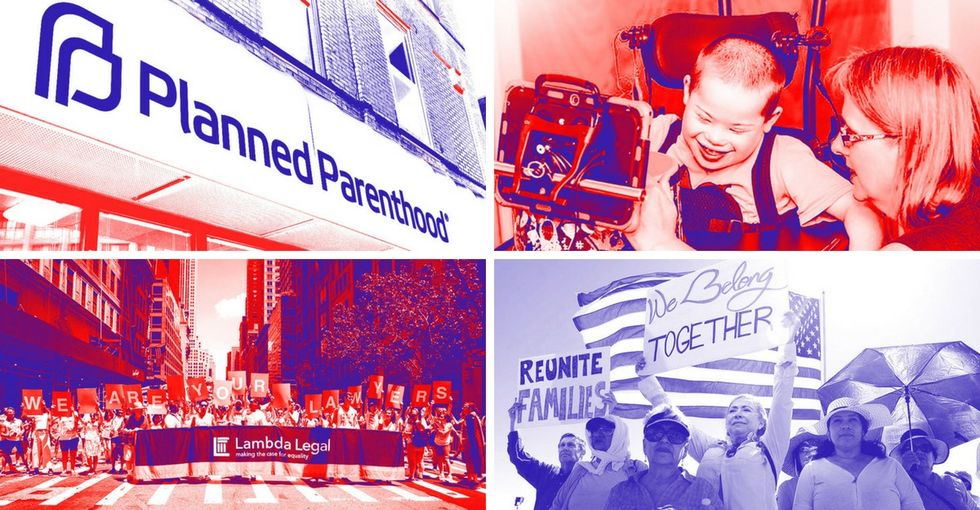 Independence Day is an important day in the United States.

In 1776, the Continental Congress declared the 13 American colonies were no longer a part of the British Empire and would be recognized as a new nation — thus asserting independence from British rule. This action led to the creation of the U.S. Constitution over a decade later.

But for years, the rights our independent nation promised only applied to certain people.

Black Americans, women, immigrants, people with disabilities, and many other communities didn't get to experience the same freedoms. Instead, to varying degrees, they experienced persecution.

With the passage of several Constitutional amendments — such as those that granted black Americans citizenship, women the right to vote, etc. — the U.S. made steps toward equality for all. But, progress is an ongoing journey. While our nation has improved in many ways, black and Latino citizens still experience disproportionate rates of poverty; gun violence has decimated communities of color, schoolrooms, and churches; and LGBTQ citizens still face high rates of discrimination.

Thankfully, Americans are a fighting bunch. Citizens across the country continue to raise their voices for the rights of all Americans. Here are six organizations fighting tirelessly to ensure that rights to freedom and justice truly do apply to all citizens:

RAICES is a nonprofit that provides free and low-cost legal services to immigrants. The Texas-based organization has been doing great work to support immigrants since 1986, and they're now the largest immigration legal services provider in Texas. After a Facebook fundraiser for the organization went viral and amassed more than $13 million, RAICES has been able to increase its ability to help separated families locate one another. Their dedication to reuniting families and ensuring that immigrants are afforded the human rights they deserve serves as a true example of fighting for liberty and justice for all. You can support RAICES here.

Photo courtesy of Color of Change. Illustration by Tatiana Cardenas.

Color of Change is one of the largest racial justice organizations in the U.S. Operating online, it strives to make the government and large corporations more knowledgeable about how to create safe and equitable environments for black Americans. Striving to ensure black Americans enjoy the same freedoms afforded to them by the Constitution, the organization continues to successfully fight for economic, criminal, and media justice as well as be an amplified power and voice for people of color. You can support Color of Change here.

Americans living with disabilities have made huge strides thanks to organizations like Easterseals leading the way. Easterseals works to provide support to citizens with various disabilities. Their work contributes to a growing mission to ensure that all Americans enjoy accessible spaces and the same freedoms and respect. You can support Easterseals here.

Planned Parenthood provides comprehensive health services, such as mammograms, birth control, and reproductive and sexual health care, to millions of women around the world. Recently, the organization has been under increased attack from the far right and Christian extremists. In spite of threats from the current administration to decrease funding and growing discrimination, citizens and celebrities have banded together to keep the vital organization flourishing and able to provide health care and services. You can support Planned Parenthood here.

LGBTQ Americans certainly weren't mentioned in text when the Founding Fathers were imagining what a free nation for all would look like. Lambda Legal has spent years fighting for equal rights and safer environments for LGBTQ people and queer expression. But, in light of recent rollbacks to policy in place to protect queer citizens, that work is really just beginning.

Lambda Legal communications director Jonathan Adams writes, "We have seen in their continued attacks on heath care an issue of grave concern to millions of Americans today. We the people — all of us — must stand together at this time to protect our shared rights and freedoms." Adams highlights how the current administration is "actively working to divide us by attacking children, immigrants, people of color, trans and queer individuals, Muslims, and other groups they seek to marginalize. Their continued focus on polarizing us is taking a toll on the fundamentals of this great nation, those being life, liberty, and the pursuit of happiness."

Lambda Legal's efforts to fight for queer citizens is more important than ever, and it is near the truth of our county's declared ideology. You can support Lambda Legal here.

Founded in 2014, Everytown for Gun Safety combined two orgs — Mayors Against Illegal Guns and Moms Demand Action for Gun Sense in America — with a shared goal for comprehensive gun safety laws. "In order for all Americans to feel and be free, it's imperative that we feel safe to be who we are in our communities — whether that's in a place of worship, at a concert or at school or a college campus," wrote Shannon Watts, founder of Moms Demand Action.

Watts continued, "We must do everything in our power  to make our communities safer and that means doing more to protect marginalized communities from gun violence. ... The fight for gun violence prevention is also a fight for equality." You can support Everytown for Gun Safety here.

The promise of America — that freedom and justice exists for all — is a beautiful example of how democracy should work. But that promise can become meaningless if we fail to ensure that those freedoms extend to everyone for a safe and equitable society. These six organizations — and many more — are doing the work to make sure that the sentiments our country was founded on extend to all citizens.