Their kind of startup gets the least funding, so this event gathered the best for a chance to win.

The best and the brightest women-led startups in the Northeast competed in Times Square for their chance at winning $25,000. 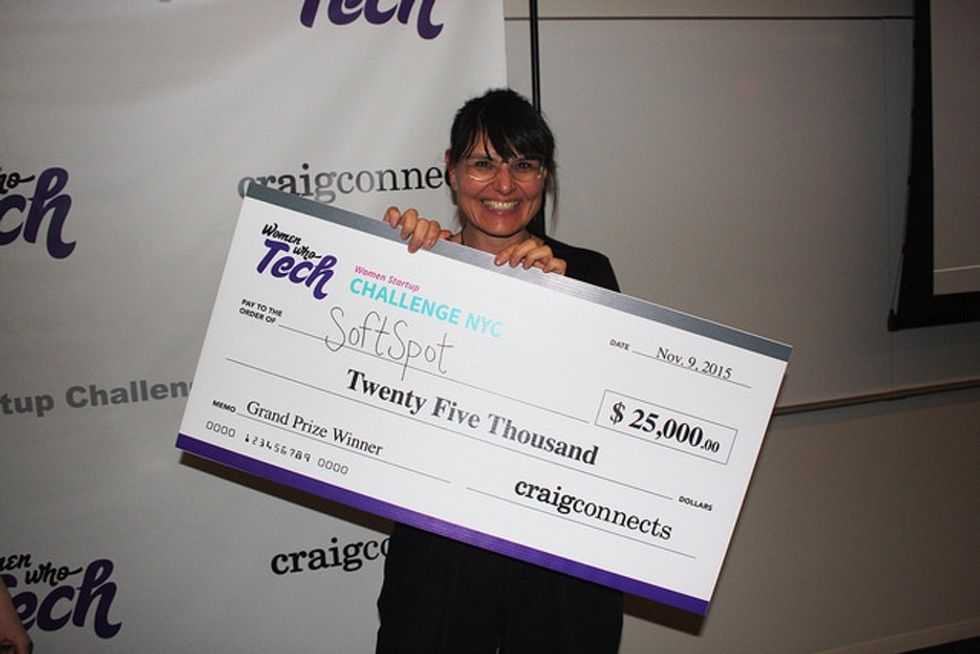 Starting a business is hard. And finding tons of people willing to invest their money in it is harder.

Sometimes the search for the right financial backer(s) can be a lot like putting up a romantic personal ad:

Fortunately, some people are working to make it easier for female entrepreneurs to connect with investors.

Like Women Who Tech, a group that supports and promotes women-led startups, and Craig Newmark, the founder of Craigslist.

They recruited some of the most impressive startups led by women in the Northeast to compete for $25,000 for their business — no strings attached.

While there was only one winner (#1 below), clearly many startups were included that were just as deserving of the money. Here are a few of them:

1. Seamless wearable technology that collects info on your body

This event's winner was SoftSpot by Moonlab for its wearable technology. But this isn't your momma's Apple Watch that everyone can see. This tech can be put anywhere — underwear, bathing suit, whatever — making it virtually invisible as it collects data on you and the environment around you.

2. An eco-friendly pregnancy test you can flush down the toilet

Pregnancy tests have been around for decades, and not much has changed about them. But this new test by Lia Diagnostics is pretty darn awesome. It's super small and discreet, so you don't have to worry about sneaking around with a long box. Then you can simply flush it after use, which keeps your business your own — while being better for the environment.

3. A medical device that detects bedsores — before the naked eye can see them.

Gaspard's Rubitection, Inc. created a device that can help health care providers catch bedsores before they cause a huge problem for patients. How? Through a device that uses light on the skin to detect ulcers. Simple, easy, effective!

4. An app that makes pairing parents with carpool buddies a breeze.

Little Sonia has a birthday party to go to but wants to get a carpool together? Try GoKid; it makes scheduling and keeping track of responsibilities a breeze. Something that makes it easier to parent and help the environment? Yes, please!

5. An award-winning app made to help small business owners easily find out what might be affecting them.

Imagine you're a business owner who has a big event planned, but nobody seems to be coming through the door. You're probably thinking: Is it me? Vizalytics can help you answer that question with info about traffic and transit delays that might have a big impact on attendance.

You may be thinking, "OK, sure, this stuff is cool, but why have a female-only startup event?"

Well, you see how these inventions could make our lives a whole heck of a lot better — from assisting small businesses to families to hospital patients. So why aren't they big companies already?

Well, according to an MIT study, women founders get only 7% of venture capital dollars. They obviously are not getting their fair share, which is why this event is so awesome. It helps showcase what funders are missing out on when they overlook amazing female trailblazers in the tech sector.

Fingers crossed that this will help more women-led startups get the funds they need — and deserve.