The scary thinking that drove Brexit isn't unique to the U.K. 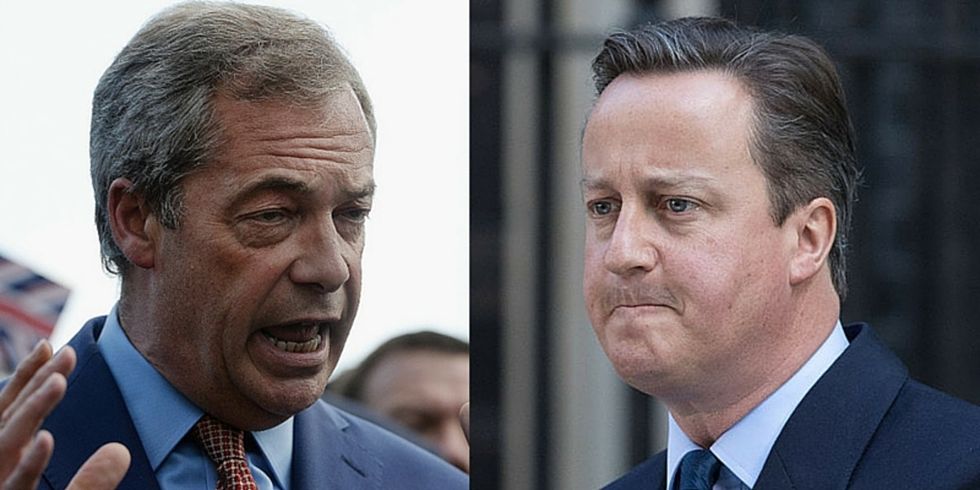 It's a historic decision that is sure to reshape the U.K.'s place in the world and have huge implications on the global economy.

In fact, the British pound has already fallen 10% — to a 30-year low — and Asian and American stock markets are currently tumbling.

Although the vote is nonbinding and was extremely close ("leave" won with 53% of the vote in England and only 52% in Wales; "remain" won in Scotland and Northern Ireland), Cameron's exit signals a dramatic shift in the way the U.K. will be governed from now on.

"The British people have voted to leave the European Union," Cameron said in his exit speech. "And their will must be respected."

How the so-called "Brexit" (British exit) will affect the rest of the world remains to be seen, and its true implications will take years to come to fruition, but one alarming fact is emerging as the dust settles.

Underneath the vote is an all-too-familiar rise in xenophobia, anger, and a fear of immigrants.

Between 1993 and 2014, the immigrant population in the U.K. more than doubled, from 3.8 million to around 8.3 million — many coming from India and Pakistan, but many more coming from other European countries like Poland, Ireland, and Germany.

The European Union, which has many functions, serves as a kind of facilitator to immigration. Citizens of the EU can more easily migrate to other EU member-states.

Immigration across various countries within the EU spiked between 2004 and 2014, increasing from 25% to nearly 50%. Such an influx in immigration caused a lot of tension, and as of a 2013 survey, nearly 60% of Britons stated that they wanted immigration to be reduced a lot.

Chart via The Migration Observatory, University of Oxford.

Enter Nigel Farage, who is sort of England's version of Donald Trump. He's the leader of UKIP, which is sort of the U.K.'s Tea Party.

Farage and the U.K. Independence Party (UKIP) essentially became a megaphone for the anti-immigration movement and, in turn, the Brexit movement.

Initially an irrelevant punchline in the '90s, UKIP has risen to prominence over the last couple years and has become less and less funny. In a 2015 election, UKIP received nearly 4 million votes.

Sounding familiar yet? How about this:

“There is an especial problem with some of the people who’ve come here and who are of the Muslim religion who don’t want to become part of our culture. So there is no previous experience, in our history, of a migrant group that comes to Britain, that fundamentally wants to change who we are and what we are. That is, I think, above everything else, what people are really concerned about.”

That's Nigel Farage speaking about Muslims in an interview from March 2015.

The data on immigration to the U.K. disagrees with Farage's claims, however. New immigrants to the U.K. haven't brought a crime wave. In fact, between 2013 and 2014 there was a drop in crime.

All of this anti-immigration rhetoric has been a huge factor in the growing support for, and eventual vote in favor of, Britain's exit from the European Union.

Many, though, see the new restrictions on EU-to-EU immigration as a bad thing.

As a result of the Brexit vote, "the younger generation [in the U.K.] has lost the right to live and work in 27 other countries," wrote a commenter on The Financial Times. "We will never know the full extent of the lost opportunities, friendships, marriages, and experiences we will be denied."

The Brexit vote was incredibly close, and looking at who actually voted to "leave" is revealing.

Areas with high working class populations turned out in record numbers and largely voted to leave the EU.

Incredibly, the Brexit movement has convinced people to vote strongly against their own economic self-interests, a phenomenon that's been observed stateside among Republican voters in the working class.

British citizens are currently watching in anger and horror as their pensions plummet and their stocks and investments go into free fall — which will have devastating effects on everyone — including those who voted in favor of Brexit.

In another frightening parallel to sentiment we've seen this election season in America, some Britons are saying they voted "leave" just to stick it to the establishment, not thinking their side could actually win.

Here in the U.S., we've seen the rise of similar sentiments to those espoused by UKIP and Nigel Farage in our own politics over the past few years — and especially in the past few months.

Despite data showing that immigrants don't cause any rise in crime or steal our jobs, or lower our wages, the Tea Party (and presumptive Republican nominee for president Donald Trump) has gained traction on the assertion that they do.

What Trump and Farage and their respective parties have in common is that they capture an idea that is rooted in fear. Specifically, the idea that their nations are being stolen away by immigrants who want to take jobs, commit crimes, and generally wreak havoc for the people who "belong" there.

That type of nativism has proven time and time again to be dangerous.

Come Election Day in November, Americans should remember what happened as Brexit unfolded — and learn a lesson from what is happening in the U.K. right now.