The price is low. The quality is high. So why doesn't anyone want one of these T-shirts?

Let's learn who made your clothes. 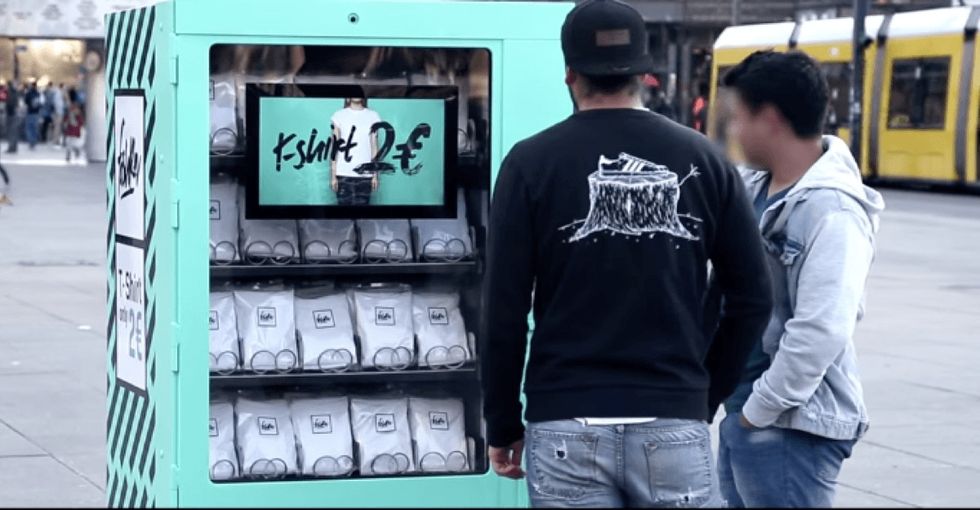 When it comes to fashion, most of us are on the lookout for something stylish that doesn't necessarily break the bank.

And we're in luck because it seems like fashion just happens to get less expensive by the day.

A $5 T-shirt? Great! A $10 dress? Wonderful! These are the things smart shoppers and bargain-hunters stay on the lookout for.

But have you ever wondered how stores are able to sell clothes so cheap? Like, really thought about it?

To be completely honest, I hadn't given it much thought. A shirt is a shirt, and the only trip I thought about was from the rack to my closet and not about the journey it took to make its way to the rack.

If I knew what went into making my clothes, I just know I'd be upset.

And it makes me even more upset to think that companies aren't giving me an affordable option other than to feel guilty about the clothes I buy.

Because sometimes that path involves sweatshops or child labor. Workers sometimes make just pennies an hour and are forced to work long hours in unsafe conditions.

Well, one group is putting the stories of the workers who make the clothes we see on the racks in our favorite department stories front and center, hoping that companies will choose to become more transparent about where their clothes come from.

Fashion Revolution, a nonprofit dedicated to increasing transparency in the fashion industry, recently conducted a social experiment involving a vending machine and some cheap T-shirts.

T-shirts in the vending machine were being sold for just 2€ (roughly $2.25). It was a quality product at an amazing price, so why wasn't anyone actually buying them?

When picking a size, shoppers were given a digital introduction to the people who made the shirt they were about to buy, along with some details about their working conditions.

A look of shock covered the shoppers' faces as they learned about the long hours and low pay these people made.

Shoppers were then asked whether they still wanted the shirt. They all decided to donate the money instead.

Suddenly, the shirt that looked like such a great deal had been tainted by the truth behind it. For most of us, we simply don't know the backstory.

Fashion Revolution's goal isn't to shame consumers but to nudge businesses in the right direction.

By making themselves transparent, businesses hold themselves accountable and are more likely to make sure that the working conditions in factories and with suppliers meets the same standards they hold themselves to in public.

The group points to an April 2013 incident in which more than 1,100 people died in a Bangladesh garment factory as the driving force behind their push to improve working conditions.

Here's how they describe the incident (and their goals) on their website.

"On 24 April 2013, 1133 people died in the Rana Plaza catastrophe in Dhaka, Bangladesh. A further 2500 were injured. They were killed while working for familiar fashion brands in one of the many 'accidents' that plague the garment industry.

We want to use the power of fashion to inspire a permanent change in the fashion industry and reconnect the broken links in the supply chain. At the moment of purchase, most of us are unaware of the processes and impacts involved in the creation of a garment. We need to reconnect through a positive narrative, to understand that we aren't just purchasing a garment or accessory, but a whole chain of value and relationships.

By asking consumers, designers, brands, and all those who care to ask a simple question 'Who Made My Clothes?' we envisage a change in perspective that will lead to a deeper understanding."

You (yes, you) can make a difference, and it's easier than you might think.

Start by asking brands one very simple question: "Who made my clothes?"

Fashion Revolution breaks it down into a quick, four-step process.

By doing this, we can play a role in holding the industry accountable. Consumers aren't the cause of the problem, but we can be a big part of the solution.

This isn't about boycotting brands but helping them become better global citizens. As Carry Somers, the founder of Fashion Revolution Day, told Marie Claire, she's not asking people to boycott stores. Instead, she believes the industry needs to change from the inside.

And while brands might not be especially interested in hearing criticism from the people within the supply chain, they're more than willing to listen to consumers. That's how we can help.