The eco-friendly reason your next delivery may arrive via electric bike. 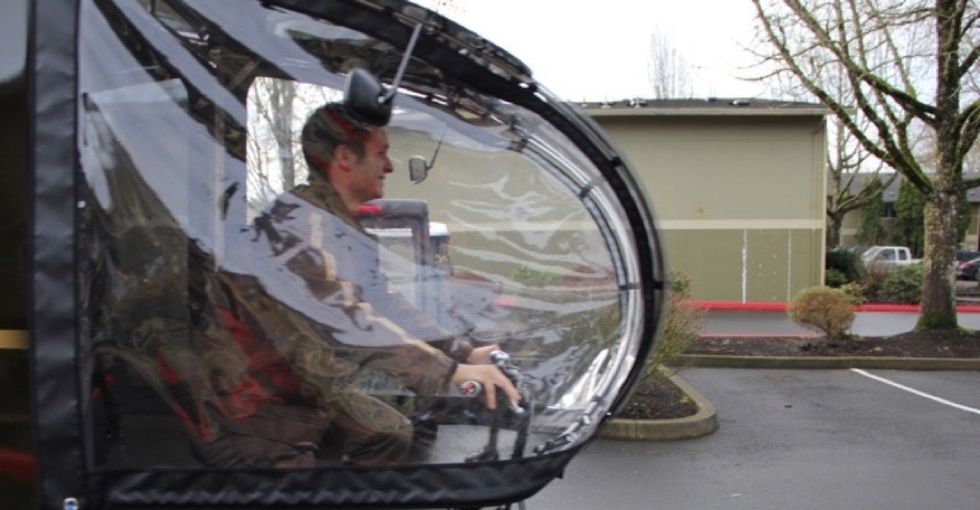 At any given moment, there are more than 370,000 trucks, cars, motorcycles, and vans delivering packages and mail around the U.S. Then there's Casey Redman.

Redman is pedaling around Portland, Oregon, as an operator of the first and only UPS e-bike in the U.S. That's right, Redman is delivering packages by bicycle.

But this is not a return to the company's humble beginnings; it's a forward-thinking experiment to see if electric bikes have a place in the American delivery landscape.

An e-bike is essentially a traditional bicycle with some extra oomph in the form of a rechargeable battery.

Pedal-assist bikes, like the UPS e-bike, are akin to a hybrid car. The operator pedals the bike mostly under their own power, but the battery can kick in for a boost when needed, like going up steep hills or carrying heavy loads. It's all the fun of cycling without the pedaling.

"Ultimately and optimally, the bike is operated with human power and electric power simultaneously to get the most out of the energy," says Scott Phillippi, automative maintenance and engineering manager at UPS and the company's e-bikes expert.

The Portland test features just one e-bike designed and built in the city by Truck Trike, a local company. It weighs about 230 pounds, has an 18-mile range, and can haul 600 pounds of payload. The cargo box, where Redman stores the packages, is just under 5 feet long, 68 inches high, and 4 feet wide. It's approximately 100 cubic feet.

"If you compared that to one of our typical delivery vans, it's about a one-tenth of the size," Phillippi says.

UPS declined to share the price of the bike in the test, but similar bikes from Truck Trike range in price from $10,000 to $14,000 depending on features.

While e-bikes are not new technology, this is the first time UPS is trying them stateside.

A similar four-week e-bike test ran in Basel, Switzerland, last summer. Basel, known for its narrow streets and limited parking, was the perfect place to pilot the initiative. And the company already has a fleet of e-bikes on the road in Hamburg, Germany.

Photo of a UPS cargo cruiser in Hamburg, Germany. Photo via UPS Pressroom.

The success of these programs lead to the test in Portland, which began Nov. 21. Portland was a logical choice for the experiment because the bike-friendly city already boasts a seasonal fleet of operators on traditional bicycles.

During the test, UPS will be exploring the design and reliability of the e-bike and whether it works within the city infrastructure. If the test run goes well, UPS may add more e-bikes to the fleet and run tests in other U.S. cities.

"Lots of things lined up for us to at least to put our toes in the water or see how this would work in the U.S.," Phillippi says. "It may not be an exact replica of what Hamburg is, but at least we're gonna see where it goes from here."

UPS considered e-bikes as a solution to congestion, an issue plaguing drivers across the country.

In 2011, American commuters in urban areas collectively lost 5.5 billion hours stuck in traffic. That means the average urban commuter lost close to a week of productivity while stuck behind the wheel. All that start-and-stop driving also cost commuters at the pump because drivers purchased an additional 2.9 billion gallons of gas and spent an extra $121 billion in added fuel costs and lost productivity.

For a company based on driving and delivering packages door to door, congestion costs UPS millions of dollars each day, not just in lost time, but in fuel and emissions too. The e-bike is unique in that it can ride in the bike lane and requires no gasoline to operate. So not only can it navigate around congestion, it can do it without carbon emissions. Or as Redman says:

Redman takes the e-bike for a spin. Photo by Erin Canty/Upworthy.

It does, however, require some effort from the operator.

"[Operating the bike] is nothing very difficult at all," Phillippi said "There's a throttle, and everything else pretty much works like a normal bike would."

And for the most part, that's Redman's experience. The athletic former spinning instructor and bicycle commuter admitted that while the bike was easy to handle, there's a bit of a learning curve, especially when it comes to hills.

"There are some hills just up the road," he says, pointing in the distance. "I see [other bike delivery drivers] cruising up there. It's going to take some practice."

And you can't go in reverse, which is fine on a regular bike, but a little frustrating with 600 pounds of boxes to negotiate.

Redman puts the bike in reverse with a little elbow grease. Photo by Erin Canty/Upworthy.

As efficient (and frankly adorable) as e-bikes are, it would require a sizable shift in our transportation landscape to make this the norm.

E-bikes will likely never replace delivery trucks or vans as the preferred method for getting packages to your door.

So it's easy to look at test runs like this and question the very idea of this project. What will one bike do? On its own, not much. But one e-bike, coupled with alternative fuel vehicles, better logistics and planning, and consumers and stakeholders looking ahead to green alternatives? Now we're getting somewhere.

If a large company like UPS can make eco-friendly, traffic-sparing, money-saving changes to its fleet, other companies may soon follow.

Whether or not that's the case, all of us, big companies and individuals, need to assess how we're changing our habits and routines to limit our carbon footprint and ease congestion.

We can't afford to wait. Walking, driving, or on three wheels, we're in this together.