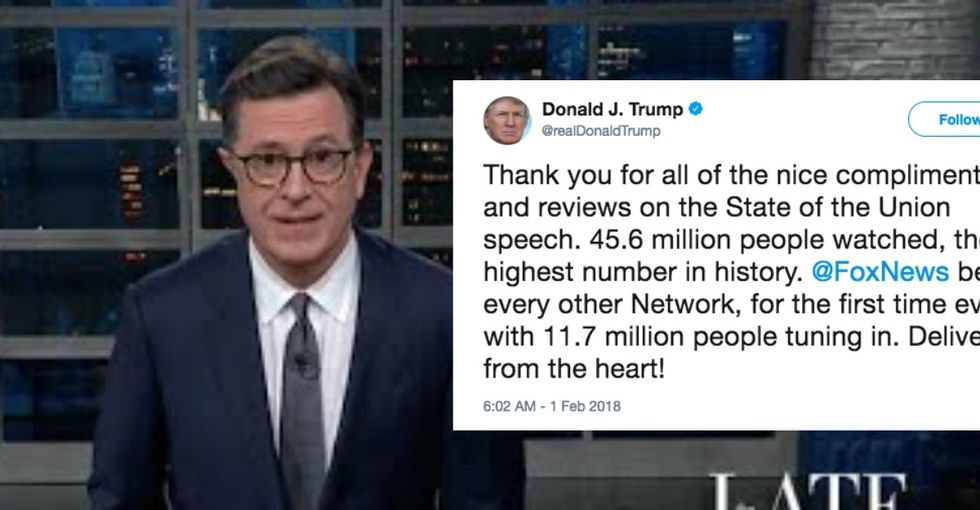 On Feb. 1, 2018, President Donald Trump tweeted that his first State of the Union was the most watched in history.

"Thank you for all of the nice compliments and reviews," he wrote. "Delivered from the heart!"

The problem, of course, is that this claim is verifiably false.

As New York Magazine pointed out, fewer people watched Trump's State of the Union than the first addresses given by the previous three presidents. Even Fox News(!) published a tweet debunking the president's claim.

Whether it's TV ratings or inauguration crowd sizes, the president seems fixated on proving his were the biggest, best there were — even when the facts so clearly say otherwise. It's a strange need Stephen Colbert pointed out on his "Late Show" monologue on Feb. 1.

After pointing out that other presidents have had higher-rated addresses, Colbert reasoned:

"Look, it doesn’t matter how many people watched. But what does matter is that the president needs to lie about it, and then somehow get away with it. This is the new world we live in."

Because it doesn't seem like the president's thought this one through.

His public statement file by the nonpartisan fact-checking organization PolitiFact is littered with "mostly false," "false," and "pants on fire!" ratings. In his first year in office, Trump made over 2,000 false or misleading claims according to The Washington Post, which pointed out the president often doubles down on his most dubious points many, many times; like his administration's ability to build an inexpensive border wall with Mexico in under one year (nope, not feasible).

You might be tempted to credit Trump's lying if it were fooling the American public to his advantage. But it's not. Just one-third of American voters considered Trump "trustworthy," according to a Politico/Morning Consult poll published last October — a figure that falls in line with his historically dismal approval numbers.

Colbert, however, is leaning into Trump's obsession with always "winning" — even when it completely bends the truth.