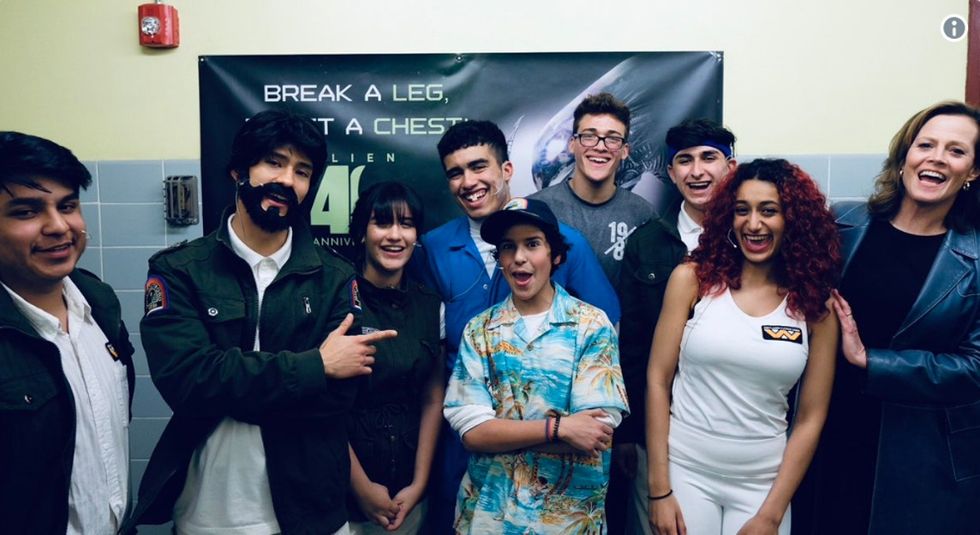 Sigourney Weaver attended the encore performance of Alien: The Play at North Bergen HighSchool in New Jersey, surprising the cast of students. Man, this is kind of making me feel resentful Hugh Jackman didn’t show up at my high school’s production of Les Mis.

Before the show, Weaver gave the students a pep talk, which was later Tweeted by North Bergen’s mayor, Nicholas J. Sacco. “I’m so excited to be here. I’m representing all the Alien fans from allover the universe,” Weaver said in her speech. “I think what you’re doing is so cool and so important.”

They say that imitation is the best form of flattery, and in this case, they are right.

Afterwards, she met with the students, who flipped out over getting hugs from the o.g. Ripley.

Look who stopped by North Bergen High to visit the spectacular cast of Alien: The Play. Thank you, Sigourney Weaver… https://t.co/fk9IIxOODG
— Alien (@Alien) 1556324285.0

Alien: The Play went viral when photos of the production were posted on Twitter.

You can watch the full performance of the play on You Tube.

The idea of staging Alien is cool in and of itself, but the show’s sets, spacesuits, and special effects all made from recycled materials were enough to elevate it from high school theater to a modern masterpiece.

More surprisingly, this show came from a school that doesn’t even have a real drama department, just an English teacher with a lot of passion.

This wasn’t the first time Weaver addressed the students. Back in March, she sent them a video praising their production. “I saw a bit of your production of Alien. I just want to say it looked incredible. You put so much heart and soul into that and the alien, I must say, looked very real to me,”Weaver said. “I just want to send our compliments, not only from me, but from James Cameron and the original screenwriter, Walter Hill. We all say bravo, well done. And just one more thing — you know, the alien might still be around. So when you’re opening your locker, just do it very slowly.”

Weaver wasn’t the only one involved in Alien to support the school. After hearing about the viral play, Alien director Ridley Scott donated $5,000 so the students could stage an encore production of the play, and also suggested that the school should stage one of his other films – Gladiator.

Keep ReadingShow less
art
Get stories worth sharing delivered to your inbox
By signing up you agree to Upworthy's privacy policy.
Internet