She saw a girl on the subway and didn't dare ask for her number. Over a year later, here they are. 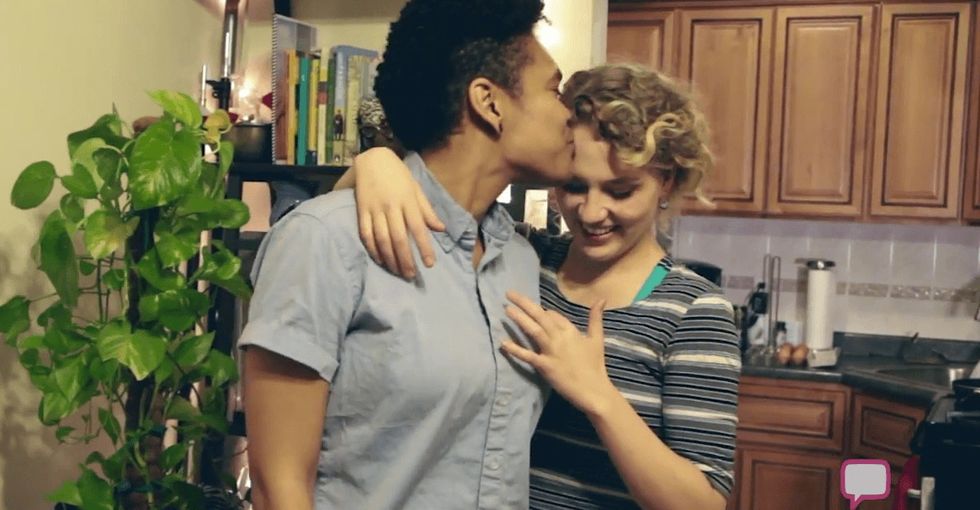 Simone was standing on a New York subway platform one day when she spotted a person.

The girl Simone saw might have not have been dressed to the nines. Still, Simone felt a sudden attraction.

We've all been there before. We see an stranger in a public space. We feel an attraction. And we wonder, "Do I make a move?"

Yep, that's from Blue Is The Warmest Color. via HaiDaSpicciare/Tumblr

But back to Simone. She and the stranger get on the same train. The entire train ride, Simone knows she wants to talk to her.

She continues trying to write poetry in her notebook instead, occasionally looking up at the girl — but never speaking to her:

"I don't say anything, because I'm too shy. This girl will think I'm crazy for just walking across the train and talking to her out of nowhere. Number two, she's out of your league. She's way too pretty. And number three, she's probably straight."

Simone makes herself promise that she'll make that move if the girl gets off at the same stop. One stop before Simone's, the girl gets up.

Watch Simone tell the rest of her story to I'm From Driftwood.

SPOILER: Simone and the girl end up together — a year and a half later. How did that happen?

We hear a lot of ordinary love stories every day. But we don't often hear about ordinary same-sex love stories. That needs to change.

Why? Put yourself in the shoes of someone who is gay, bisexual, or queer.

Imagine growing up in a world where you only see opposite-sex couples in movies, on TV shows, on posters. A world where people like you don't seem to exist.

Now imagine finally seeing your own life reflected back to you.

It's as beautiful as it gets.