Scientists gave a camera to an octopus, and she only needed 3 tries to learn to use it. 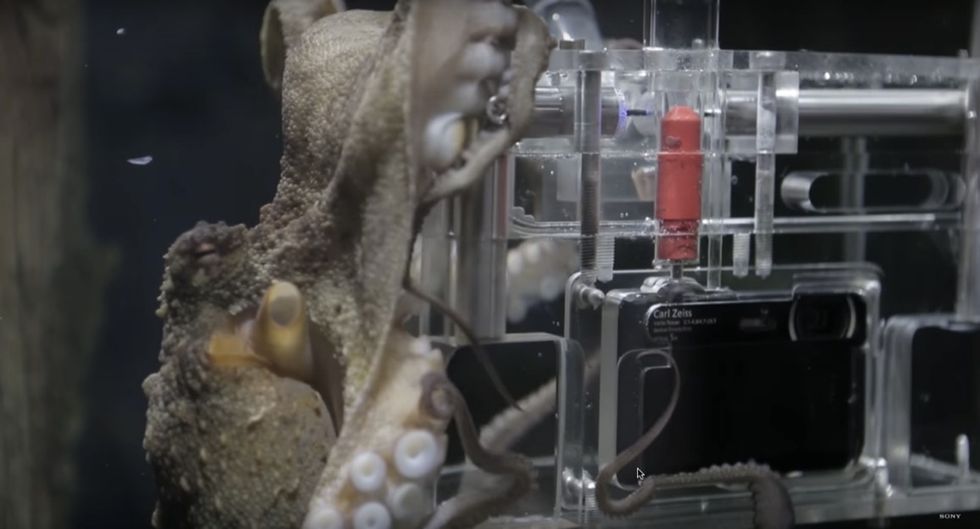 How does an octopus say "cheese"?

Presumably it sounds like a muffled underwater version of "Silly humans, bow down to your cephalopod overlords," but I can't say that we'll ever know for sure.

What we do know for sure is that an octopus named Rambo has mastered the art of the f-stop and is now selling her own original photographs to visitors at the New Zealand aquarium she calls home.

Like many talented artists, this eight-armed savant is, erm, also a bit of a diva.

"On day two, she pulled the camera off, ripped it up, smashed it to bits and spat it out," behaviorist Mark Vette recalled. "We realized how powerful she was."

They went through a dozen iterations of the camera case before they settled on one that was strong enough to withstand her tentacled fury. (That's also how she got her name.)

"What is this cheap plastic crap? They don't make cameras like they used to." GIF via One News/TV New Zealand.

Fortunately, Rambo's creative endeavor is sponsored by Sony, who happily provided her with a new TX30 camera in the aftermath of her artistic outburst. You can even check out a whole gallery of her work on their Facebook page, allowing you'll have to forgive the occasional stray tentacle sneaking into the frame.

(In other words: Yes, this was originally part of a cross-promotional marketing opportunity, but that doesn't make it any less cool.)

Rambo's not the only pictorially inclined marine mollusk either.

In March 2015, an octopus at Middlebury College turned the lens on his scientific observers. A digital media producer at the school visited a neuroscience laboratory where students were studying the clever creature. Mostly, they wanted to know if an octopus could learn by observing the actions of other octopuses.

But when they placed a GoPro in his tank, the octopus decided to turn things around and observe his own observers.

"No photos 'til I've had my coffee." GIF via Benjamin Savard/The Washington Post.

"I was just trying to brainstorm different ideas of how to show off the kind of unique research that's going on here and in ways that would be engaging," one of the students told The Washington Post. "I think the octopus's timing was great. I was just in the right place at the right time."

This all begs the question: How do octopuses even see?!

The obvious answer is, of course, with their eyes. Which is true. Ish. But like most things involving octopuses, the answer is much weirder and much more fascinating than that.

Unlike us lowly humans with our feeble brains that serve as central processing stations for our entire fragile bodies, octopus tentacles are capable of functioning as their own independent nervous systems. That's right: Each of those squirmy limbs with the suckers on the bottom basically have a mind of their own.

And just beneath the surface of the skin, those writhing minds are covered in cells called chromatophores, each of which is kind of like its own little painter's palette. These chromatophores can change color, which is how the octopus camouflages itself to lash out at unsuspecting passersby.

But they also contain opsins, the same light-sensitive proteins that are found in eye retinas. Which basically means that octopus skin can sense light and color without any help from the creature's brain.

That's right, they "see" with their freakin' tentacles!

"Oh no! The humans are catching on to us! Must escape!" GIF via Sony New Zealand/YouTube.

Honestly it's not entirely clear just how clever this specific photo-taking endeavor really is. But still!

Rambo was trained, like animals often are, using a food reward system. And her subjects all stand in a designated photobooth, within the range of the stationary camera. Obviously she's helped along by that handy autofocus feature, too — although that shouldn't necessarily be a slight against her intelligence, considering that most humans rely on that as well.

"What is 'art,' anyway? What does it truly mean to see, or to express oneself? Is art driven by intention, or the manifestation of the subconscious?" — a philosophtopus, probably. GIF via One News/TV New Zealand.

But that shouldn't detract from the fact that octopuses are weird, complicated, fascinating creatures, and we should consider ourselves lucky to share this wonderful planet alongside them.

Check out this behind-the-scenes video of Rambo the Octographer at work: