Refugees arrive without backpacks, so these women found a way to make them — from boats. 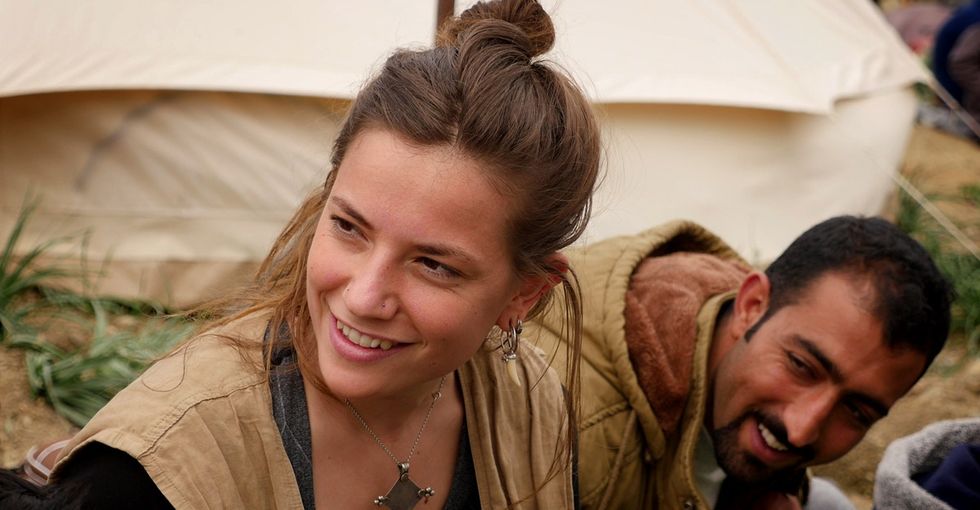 The island of Lesbos is a popular landing place for refugees fleeing countries in the Middle East, looking for safety. After arriving, most continue a long trek to other European countries.

Nobody can take away the difficulty and pain — both emotional and physical — that refugees endure, but there sure are a lot of people who are working hard to help.

Take Floor Nagler, a 24-year-old Amsterdam resident who is studying textiles. Radio Free Europe shared an incredible story (and photos) about an idea that struck her when she was in Lesbos in January, helping newly arrived refugees.

And not only did Nagler have an idea, but she saw it through.

Floor Nagler, left. All photos belong to Radio Free Europe and are shared here with permission. You can also check out more incredible photo stories on their Instagram page. Photo by Amos Chapple (RFE/RL).

She could see that the refugees needed backpacks because many of them had lost their bags during their travels.

She also observed that once they arrived in Lesbos on rubber boats, they abandoned the boats they traveled on because they no longer needed them.

They also abandoned their lifejackets.

So Nagler gathered up over 40 pounds of boat materials and returned to Amsterdam,

Then she asked her friend, 27-year-old artist Didi Aaslund, to help her brainstorm a way to turn all that material into useable backpacks.

The pair worked together and designed a simple, effective backpack made from "one folded piece of boat material, held together with rivets and clipped shut with buckles from life vests," Radio Free Europe explained.

The backpacks cost just $3 each and there's no need for electricity to make them.

They returned to Lesbos and hosted a bag-making workshop that lasted one week, beginning on Feb. 29.

You can see the process in the following photos:

Pretty cool, right? If you want to watch them in action, Radio Free Europe has a great video about Nagler and Aaslun's work.

What they're doing really brings Mister Rogers' words of wisdom to life: "When I was a boy and I would see scary things in the news, my mother would say to me, 'Look for the helpers. You will always find people who are helping.'"

There are a lot of really kind helpers in this world.