President Obama visited a mosque today. In a perfect world, no one would care. 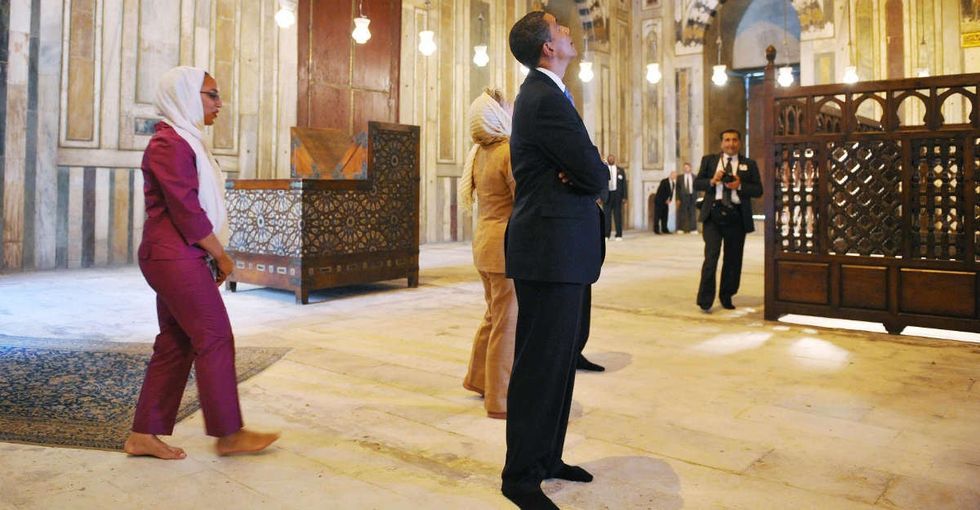 President Obama visited a mosque in Baltimore today, and it's big news.

Obama visits a mosque in Malaysia in 2009. Photo by Mandel Ngan/Getty Images.

It's big news because it was the first time the president visited a mosque in the U.S. during his presidency, according to a BBC report.

It's also big news because Obama used the visit to take a stand for religious freedom and show support for a Muslim American community that's been subject to an increasing amount of distrust, violence, and suspicion.

"An attack on one faith is an attack on all our faiths," Obama said, per an NBC News report. "We have to be consistent in condemning hateful rhetoric ... none of us can be bystanders to bigotry."

It's pretty cool that the president did this.

American Muslims have had a rough go of it lately, largely owing to the backlash after November's shootings in Paris and December's San Bernardino attacks as well as the ridiculous, bigoted ramblings of a certain presidential candidate. That the president is willing to stand side by side with fellow Americans — against intolerance — in their place of worship matters.

But it's kinda sad that it's still a big deal when a U.S. president visits a mosque.

Meanwhile, Obama could basically just waltz into any church or synagogue in America without so much as a single camera flash going off (to the extent that Obama could go anywhere without reporters following him).

Islam is just as "normal" an American religion as Christianity, Judaism, Buddhism, Hinduism, Sikhism — or any other faith. Over 3 million Americans are Muslim, and that number is growing.

An American president visiting an American mosque should be a totally boring move. You know who else visited a mosque when he was president?

The fact that it's still a big deal for a U.S. president to go to one 15 years later means we still have work to do to ensure Muslim Americans are always included when we say "Americans."

Obama participates in a roundtable at the Islamic Society of Baltimore. Photo by Mandel Ngan/Getty Images.

With any luck, next time, this will be less of a thing.