Post-Weinstein, Jim Jefferies calls out himself for past sexist jokes and behavior. 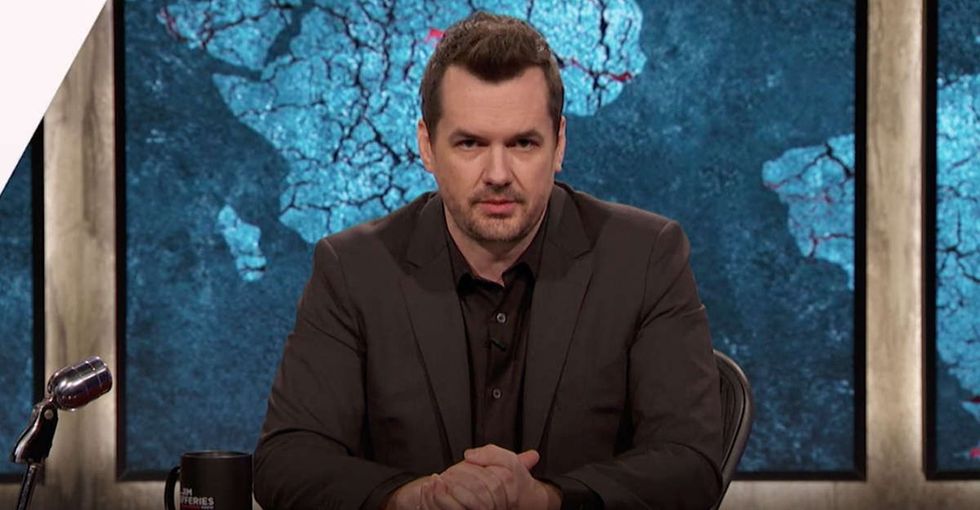 Comedian Jim Jefferies was floored by the avalanche of women sharing stories of sexual harassment and assault in the wake of the Harvey Weinstein revelations.

After laying into Weinstein in a raucous, wide-ranging monologue on "The Jim Jefferies Show," The Comedy Central host spent the segment's final minutes reflecting on his own ignorance and complicity in a culture that allows behavior like Weinstein's to exist.

"Now, I’ve been known to make the occasional inappropriate or sexist joke. My act is what you’d call an acquired taste. But I’ve always believed that my audience understood that those are jokes and don’t represent my actual beliefs. Then came the day when a large part of America was willing to write off pussy-grabbing as 'locker room talk,' and I started to rethink that. And if this latest news has made me realize anything, it’s that we as men have been incredibly ignorant about what’s happening right underneath our noses. The women who are now sharing their painful experiences are some of the richest, most powerful, and beloved women in the country, and if they’re fearful of speaking out, just imagine how hard it must be for every other woman in the world.

I was stupid to think that people like Harvey Weinstein were rare. Look at your Twitter and Facebook feeds this week, and you’ll see women sharing their own stories using the hashtag #MeToo. Chances are that every woman you know has experienced harassment or worse. I thought I was a pretty good guy, what with all the not raping I’ve done, but it turns out, that’s not enough. It’s a start, but it’s not enough. We need to create a culture where women feel safe coming forward about their experiences, and when they do, we need to hear them. Every week on this show I say, 'I think we can do better.' I know I can."

For Jefferies, the pressure the "do better" wouldn't be as strong without millions of women outing themselves as survivors.

The hashtag #MeToo has been posted to Facebook, Twitter, and Instagram more than 12 million times, helped along by celebrities like Alyssa Milano, who urged women to come forward to convey a "sense of the magnitude of the problem."

The comedian's monologue raises the critical question of what role men should play in combating assault and when to add — or subtract — their voices from the conversation.

On Monday, actor Jim Beaver, himself a sexual assault victim, declared on Facebook that he would not be saying #MeToo in order to keep the focus on women, for whom the problem is systemic. Instead, he wrote, he'd say, "I believe you."

"While many men have been victimized in such [a] manner," he explained, "The painful truth is that we live in a world where women are expected to put up with such things."

Some have argued that apologies like Jefferies' are welcome but insufficient — especially without actionable follow-through.

In a fiery New York Times op-ed, commentator Lindy West questioned the value of men — many of them accused perpetrators themselves — waking up to something women have tried to sound the alarm about for years.

Others have asserted that if men contribute at all, it should be to confess their culpability. In a tweet thread that circulated on Monday, journalist Helen Rosner expressed anger that the online conversation around #MeToo has revolved around women coming out as victims rather than holding a mirror up to the men who assaulted them.

"Sexual harassment and assault didn't happen to me, it was done to me," she wrote. "I resent having to affirmatively embrace my victimhood when he's never been forced to confront his villainy."

Despite his prior ignorance, Jefferies hopes his admission will lead others to embrace reflection and change.

"This isn't a partisan issue," the late-night host said. "This is a human issue."

As he sees it, the gender he belongs to, half of all humans, still needs to take a side — and a stand. Men, particularly those with a megaphone like Jefferies, who are owning their past wrongs is a step in that direction. Will they follow through on their promises to do better? That remains to be seen.