People have been prank-calling Trump's anti-immigrant hotline in glorious ways. 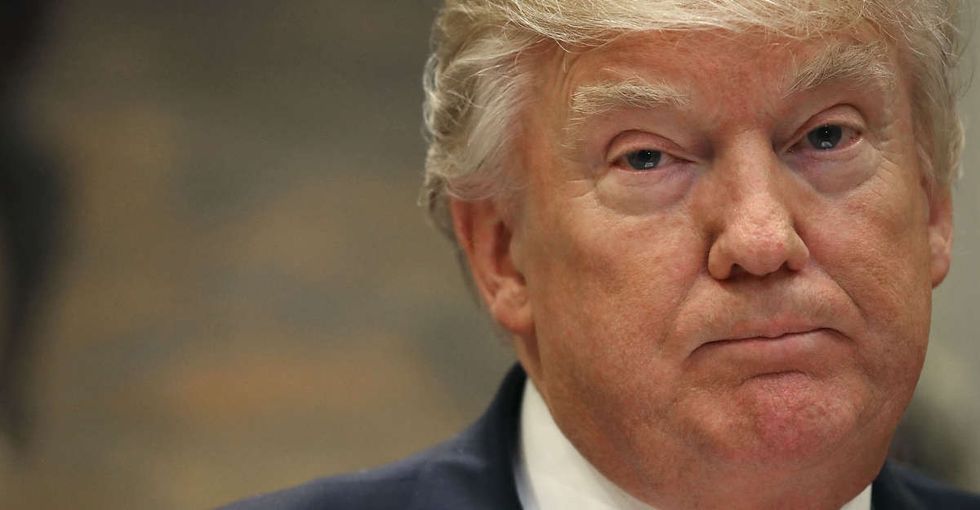 The Victims of Immigrant Crime Engagement Office (VOICE), established to assist victims of crimes committed by "removable criminal aliens," was reportedly prank-called all day by protesters claiming to have been abused by E.T., Jabba the Hutt, and other notorious creatures from outer space.

The trend was first noticed by Robbie Gramer, a writer for Foreign Policy.

Trumps’ “VOICE” Hotline set up for people to report on crime from illegal aliens was reportedly overloaded with calls about space aliens
— Robbie Gramer (@Robbie Gramer)1493248933.0

An Immigration and Customs Enforcement spokesperson told BuzzFeed that the hotline was "tied up" throughout the day by the protesters.

Alexander McCoy, a Marine Corps veteran and progressive activist, claims to have kicked off the tongue-in-cheek protest with a tweet Wednesday afternoon.

Wouldn't it be a shame if millions of people called this hotline to report their encounters with aliens of the UFO-… https://t.co/IjouEnR5hv
— Alexander McCoy (@Alexander McCoy)1493228439.0

"I swore an oath to defend my community and uphold the Constitution," McCoy says. "I see speaking out as a way of continuing to fulfill my oath and standing behind the immigrant community that is under attack."

McCoy, who explains that he finds the term "aliens" intentionally dehumanizing, called the hotline and — after waiting on hold for 20 minutes — was asked if he was calling to report a crime by an "illegal alien."

He told the operator that he'd been abducted and taken to a UFO.

"I heard them give a long sigh," he says. "And they closed out the conversation saying that they'd make a note of it."

Critics of VOICE allege that it unfairly demonizes immigrants — singling them out for suspicion based on their status.

The office was announced during Trump's Feb. 2017 address to Congress during a tribute to four guests whose family members were killed by undocumented immigrants.

Two recent studies conducted by The Sentencing Project, a criminal justice reform organization, and the Cato Institute, a libertarian think tank, found that immigrants — whether documented or undocumented — commit crimes at lower rates than native-born residents.

An ICE official told Upworthy that the VOICE office is intended to provide information to crime victims and does not receive crime reports, and also that he considers the protest a "shameful" stunt at victims' expense.

After McCoy's tweet went mini-viral, other prank-tivists began calling in, adding their own spin.

Michigan resident Lisa Polmanteer used her time on the phone with a VOICE representative to troll Melania Trump — claiming to have been "victimized" by an immigrant living off her tax dollars in New York City.

According to Polmanteer, the operator asked if she was talking about the first lady. When she said yes, he hung up.

Others on Twitter suggested an entirely different, punny approach.

While the prank was undoubtedly silly, its message was incredibly serious.

"I feel like the administration is going to use these stories to further demonize immigrants [and] refugees," Polmanteer says. "My grandparents were immigrants. I take it personally, I guess."

McCoy hopes the protest will move participants to support the efforts of immigrant rights groups, like United We Dream, Presente, Mijente, and the DRM Action Coalition, who have been, as he says, "fighting this fight much longer than I have."

He also hopes people will continue to take action against attempts to stigmatize those who come to the U.S. seeking a better life.

For now, that means fighting efforts like VOICE — even if it means being a little annoying.

Or especially if it means being a little annoying.

"I feel like the only thing I can do about it is be disruptive." Polmanteer says. [I'm] feeling pretty overwhelmed and powerless, you know? So I'm a jerk wherever I can be."

Keep Reading Show less
culture
Get stories worth sharing delivered to your inbox
By signing up you agree to Upworthy's privacy policy.
Trending Stories
uplifting
Heroes