'Peek' is a new way to test your eye health — all through a phone. 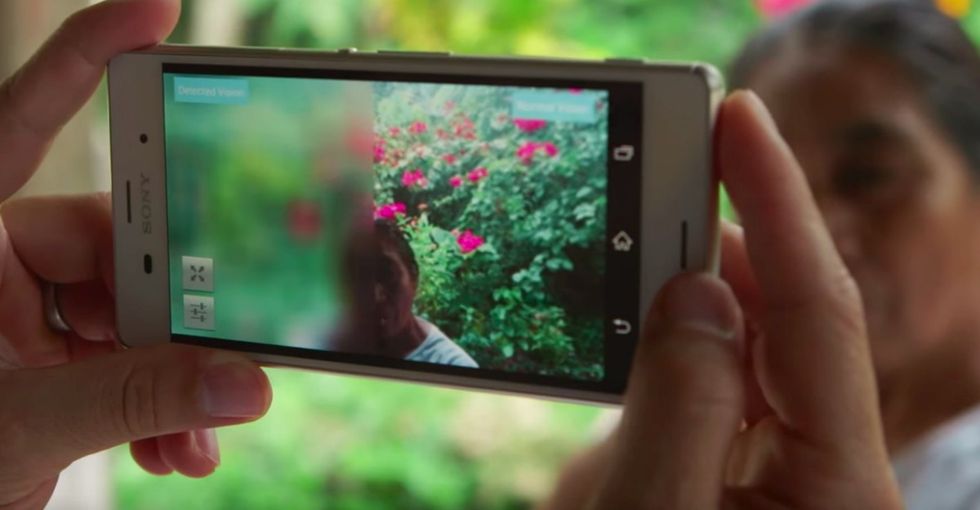 The day finally arrived for Dr. Hillary Rono to test a technology that could help blind people see again.

He was so pumped, and rightfully so.

A revolution! GIFs via DiamondJubileeTrust/YouTube.

He only needed his phone to do it.

And let's be real, we all know he was going to bring that with him anyway.

Rono and his team were finally going to put Peek — the Portable Eye Examination Kit — to the test. It's a genius idea that Rono, Dr. Andrew Bastawrous, and many others worked hard to develop.

Peek was developed by Bastawrous, Rono, and many others. It's a smartphone technology that makes eye exams easier, more affordable, and more accessible from anywhere in the world. There are no fancy machines or expensive gear involved. Instead, it's all done through your phone.

Rono had every right to be excited. Especially because the technology worked during the test.

That was just in one trip to the village. And in every village, Rono used the Peek adapter over the built-in camera on his phone to see high quality images of the eye. Then he was able to determine the overall health of the eye and what steps needed to be taken next for treatment.

The app can help detect cataracts, glaucoma, diabetes, and even signs of malaria.

And it's catching on. In Kenya, where there are only two eye doctors for every one million people, Rono can breathe a sigh of relief knowing that he can reach more people than ever before.

"When I began in the hospital, I was alone with one nurse. We were seeing 15 people in outpatients every day, and that year we operated on only 98," he said in a feature by Duck Rabbit.

"At the moment, we are seeing now 20,000 people treated for avoidable blindness and operating on 2,000 [people] a year."

20,000?!! That's progress. People who live in remote areas, who normally go without health care, are now able to access these services a lot more easily because they're so portable.

And considering that 80% of blindness in the world is preventable and curable, technology like Peek has the potential to change eyesight as we know it.

It's not meant to replace other eye equipment, but rather allow eye care to happen in areas that never used to have it. And it doesn't take a highly skilled person to use the technology, either. You simpy snap the photos and send them through your phone to a trained professional.

You'll probably be hearing about Peek more because it's planned to be released more widely in early 2016. Until then, see more about the incredible impact it's made so far in testing: