Orangutans are pretty much the best. And, guess what, there’s a whole new species. 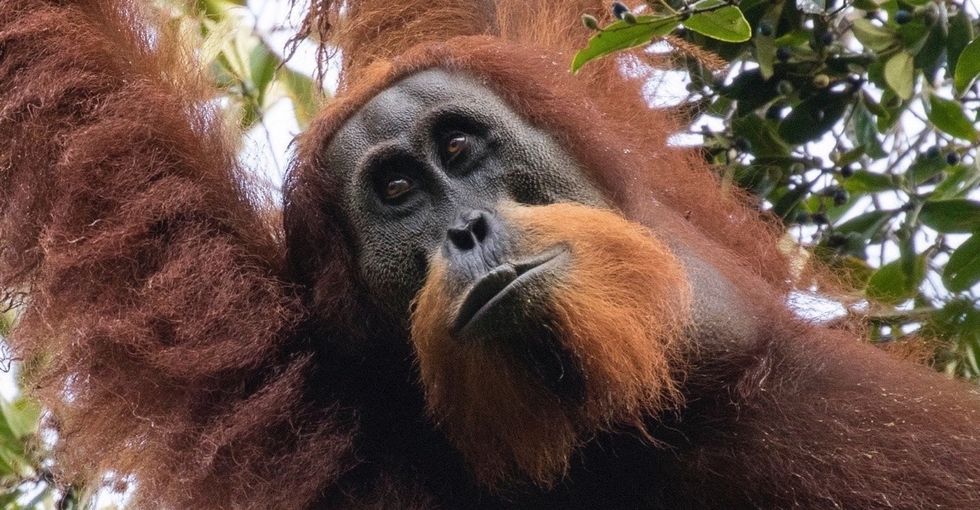 Orangutans are pretty amazing animals. They’re one of the few great apes alive today and among humankind's closest cousins. But we may not have realized just how amazing they are until now.

The discovery started with a scene out of something like "CSI." Raya, an older adult male orangutan, had been killed by humans back in 2013. Researchers knew Raya had come from an unusual population of orangutans and had preserved his skeleton for study. And as they pored over the remains, a couple of weird things started to stick out.

"We were surprised that the skull was quite different in some characteristics from anything we had seen before," said Matt Nowak, an anthropologist. The teeth looked different too.

Hey there, big fella. Photo by Maxime Aliaga/University of Zurich.

Before he became an evolutionary puzzle, Raya had come from a rugged, mountainous, and thickly forested area known as Batang Toru.

Batang Toru is far south of anywhere else orangutans are found in Sumatra. The apes that live there are cut off from any other population of their kind. Isolated populations often evolve in unique and interesting ways, which hinted to scientists that the Batang Toru apes were special.

Armed with Raya's unique skull and teeth, the Indonesian scientists reached out to colleagues who'd done a previous genetic study.

"It was then that all the pieces fell in place," Nowak says.

The Batang Toru apes weren't just special. They were a unique species.

In honor of the Malaysian district the apes were found in, the new species has been given the scientific name Pongo tapanuliensis.

The genetic analysis also showed that the Batang Toru apes weren't just a new species but may also represent an ancient genetic lineage that stretches back to the first orangutans to arrive on Sumatra eons ago.

The new species of ape. Photo by Tim Laman/University of Zurich.

But even as the world gets to know this new species of great ape, its future is already uncertain.

The entire species might only include about 800 living animals, according to a survey. In fact, primates all around the world are facing increasingly tough odds — as many as three-quarters of all primate species are in decline.

The good news is that we already know several ways to help out this new species. Like all orangutans, the Batang Toru apes need large, healthy forests to survive, which means protecting their habitat from deforestation is critical. The World Wildlife Fund, TRAFFIC, and International Animal Rescue also help governments crackdown on the illegal wildlife trade, which can affect orangutans. They even rescue infants that were sold as pets.

It's hard to look into a great ape's eyes and not see a little of ourselves reflected back at us.

The discovery of a whole new species of human cousin should be an incredible moment of joy. But it should also a rallying cry for better, stronger conservation efforts to make sure these animals stay around a long, long time.