One of the most famous St. Patrick's Day parades in the world just made history.

This was more than 20 years in the making. 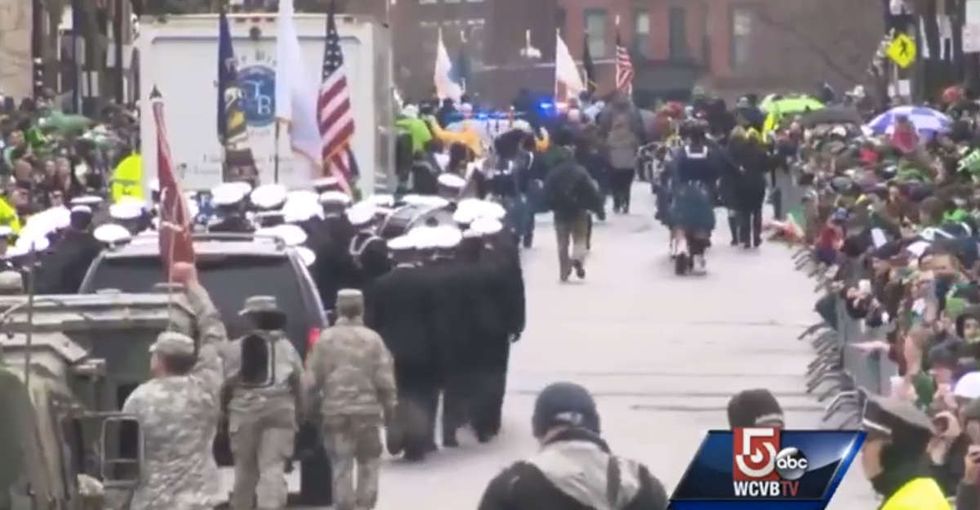 St. Patrick's Day is kind of a big deal in Boston.

For most people, St. Patrick's Day is basically a slightly greener version of the Fourth of July or Thanksgiving — a time to go outside and put on a weird hat and march around in the street. But it turns out, there's actually kindofa sortofa religious component to it.

And nowhere is this truer than in Boston, with its large Irish Catholic population.

Ever year the Boston St. Patrick's Day Parade is organized by the South Boston Allied War Veterans Council, who see the annual march, in part, as a chance to express their faith. But hey, St. Patrick's Day parades are a really good time, so lots of people wanted to join in the fun, including LGBTQ groups.

But for years, when LGBTQ groups in Boston would come to the veterans council and be like...

This back and forth went on for a long time.

There was even a Supreme Court case about it in the '90s.

And the Supreme Court ruled in favor of the veterans council, saying that since they were a private group, they could discriminate if they wanted. Which was a huge downer.

But times change. Seasons turn. Clocks get set forward an hour. There's a time to plant, a time to reap, and the circles and the ages, etc., etc.

And this year, without a big fuss, without fanfare, without even a long-winded explanation, the veterans council took a look in the mirror and thought...

"In 1995, the Supreme Court upheld a ban on gay and lesbian groups, citing free speech rights. The organisers had argued that it violated their Roman Catholic doctrine.

But the Veterans Council changed its position and its commander, Brian Mahoney, is quoted as saying 'who am I to judge?' when asked about the issue of sexual orientation." — BBC

So last weekend, two LGBT groups — OutVets and Boston Pride — marched in the parade. That's one more than marched in New York this year.

As you can see, it went wicked well. And there were lollipops.

It may not be a huge leap forward just yet, but this is how progress is made. One step at a time.

In a weird hat.