Obama has 3 powerful messages for anyone concerned with the state of America. 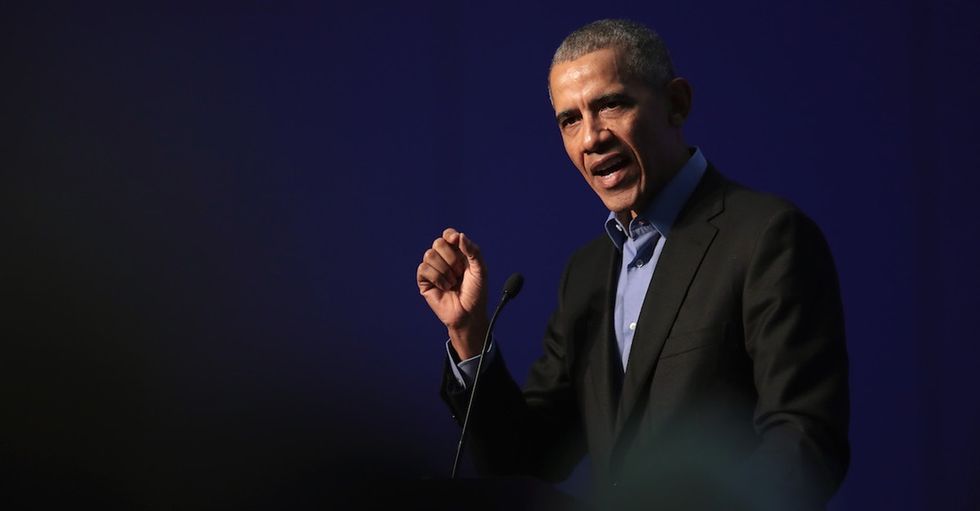 Barack Obama is speaking out about the future, and it is coming at a time when we definitely need to hear it.

In addressing what's now going on in the world at a Democratic fundraiser on June 28, Obama had painful and hopeful words about the road to progress in America. Here are the three main messages he wants Americans to focus on:

Obama gets that people are worn down and frustrated. "You're right to be concerned," he said. But it's also up to us to carve out a better future.

"Do not wait for the perfect message; don't wait to feel a tingle in your spine because you're expecting politicians to be so inspiring and poetic and moving that somehow, 'OK, I'll get off my couch after all and go spend the 15-20 minutes it takes for me to vote,'" Obama said. "Because that's part of what happened in the last election. I heard that too much."

Obama made clear that while recent elections have certainly provided some relief, it's only the beginning. Fear can be a powerful tool that galvanizes a population.

"Telling people that somebody's out to get you or somebody took your job or somebody has it out for you or is going to change you or your community or your way of life," Obama advised, "that's an old story, and it has shown itself to be powerful in societies all around the world. It is a deliberate, systematic effort to tap into that part of our brain that carries fear in it. There's a fundamental contrast of how we view the world. We are seeing the consequences of when one vision is realized or in charge."

It's imperative to not give into that fear. Instead, we should recognize it for what it is and use it as a lightning rod to spur change.

If there's one thing every one of us can do right now, it's making sure that our voices are heard in upcoming elections. That means getting registered, being informed, and voting in both local and national elections.

“I am not surprised," Obama noted, "that instead of replacing what we had done with something better, they just have done their best to undermine and erode what's already in place. ... You should go out and vote.”

"Boil it down," he added. "If we don't vote, this democracy doesn't work."

It's up to us to to create the future we want.

His words are tough but true if we want to create a better, more equitable future. Consider one thing you can do today to move the needle of progress forward. Call your reps, stand up for what you know to be right when the current administration gets it wrong, and don't lose heart — because November is coming.