Native women are going missing at epic rates. A 19-year-old wants you to know why. 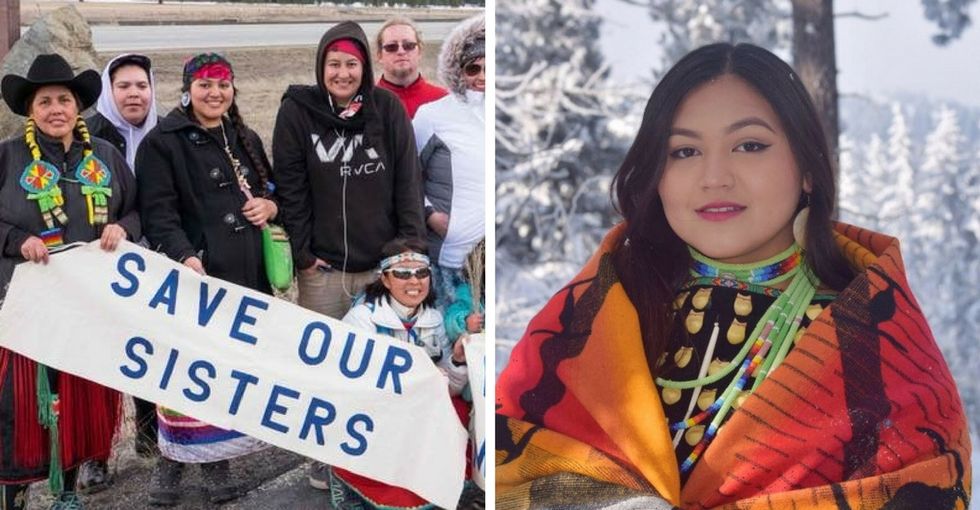 Some college students spend their spring break partying in the Caribbean. This student walked 80 miles in four days to help Native American women.

Marita GrowingThunder, a freshman at University of Montana, walked 20 miles per day across the Flathead Indian Reservation from March 25 to 28. The goal of her “Save Our Sisters” walk? To raise awareness about violence against native women.

Marita GrowingThunder (third from left) and supporters of her 80-mile walk through the Flathead Indian Reservation. Photo via Save Our Sisters MMIW/Facebook.

The Missing and Murdered Indigenous Women movement, or #MMIW, spans across the U.S. and Canada, where indigenous women face disproportionate levels of violence. According to the CDC, in the U.S., indigenous women and black women are nearly tied for the demographic with the highest murder rate. Homicide is the third leading cause of death for indigenous women ages 10 to 24.

In Canada in 2015, a quarter of all women murdered were indigenous — a sharp increase from 9% in 1980, which was still disproportionately high.

One last photo from the display yesterday #MMIW #saveoursistersmmiw

A post shared by Marita GrowingThunder Fogarty (@maritagrowingthunder) on Feb 15, 2018 at 5:28pm PST

GrowingThunder, who is a member of the Fort Peck Assiniboine Sioux tribe, had two aunts who were murdered. “I haven’t met a family who this hasn’t impacted,” she told Montana Public Radio.

What GrowingThunder is saying echoes what I've heard from my Native American friends and acquaintances. But many Americans remain unaware that this crisis even exists. We tend to place our country’s terrible treatment of Native Americans in the distant past, despite ongoing injustices and struggles caused by colonization.

Marita GrowingThunder is only 19, but she has been using her body, her voice, and her creativity to support the MMIW movement since long before spring break.

In fall 2016, GrowingThunder undertook a project to create and wear a different dress each day of her senior year of high school to honor native women who have been lost or killed.

Just a handful of the 180 dresses Marita GrowingThunder made and wore during her senior year. One dress per day — each honoring a missing or murdered indigenous woman. Photos via Save Our Sisters MMIW/Facebook.

People across the Native American community donated supplies for her sewing project in the name of specific women and families affected by the crisis. GrowingThunder dedicated each dress, about 180 in all, to a different specific missing or murdered indigenous woman.

GrowingThunder is a soft-spoken but self-assured young woman who believes young people can make a difference. "The youth have a lot of power," she says. "Not just politically, but just for humanity in general. I didn't realize I had this much power... I think people underestimate their own power."

You can hear her speak about her activism in this video:

GrowingThunder completed the 80-mile walk in 2017 as well, and both times she received a mixed response from American locals. She has been spit on, yelled at, and flipped off by people driving by. But others have offered water and kind words of encouragement.

The purpose of the walks is to honor and remember the countless women affected by this violence. But GrowingThunder also wants to draw attention to the fact that there is no database to track how many indigenous women are missing or who have been killed. Because there's no central data, statistics are sketchy and no one actually knows the exact extent of the issue. The Government Accountability Office has stated that investigations are needed to better report on trafficking within Native American populations.

Information is key. So is awareness, followed by action.

Photo via Save Our Sisters MMIW/Facebook.

Feel inspired to help? Here’s how all of us can support the MMIW movement.

This issue is multifaceted, but there are a lot of real ways to help.

Encourage your legislators to support Savannah’s Act. This bill bolsters the data tracking of missing and murdered Native Americans, standardizes law enforcement and justice protocols, and requires the Department of Justice to provide training and technical assistance to tribes and law enforcement to implement new protocols.

Support the Red Ribbon Alert project. Since there’s no database tracking missing and murdered indigenous women, this project offers an alert system for when a Native American woman goes missing. Like their Facebook page and share missing women alerts from your area.

Get to know the tribes near you. Start by learning about them, and follow the social media accounts of local tribes to find out about what's happening in their communities. Attend public events and get to know people. (In the interest of cultural sensitivity, you may want to check out articles with advice from Native American people before you go.)

Learn about domestic violence and support organizations that support victims. As with other female demographics, murder stats of Native American women are strongly connected with domestic violence. The National Domestic Violence Hotline launched the StrongHearts Native Helpline specifically for indigenous populations, and they offer helpful information about supporting all domestic violence victims. You can donate to the hotline here.

Understand how the oil, gas, and other extraction industries affect human trafficking in Native American communities. Joye Braun, member of the Cheyenne River Sioux Tribe and the Indigenous Environmental Network, explains that the "man camps" set up to build pipelines, such as Keystone XL, threaten the communities, women, and children.

"Apart from the huge environmental crisis this pipeline would bring," Braun says, "it would threaten the very lives of our people with sex trafficking, drugs, violence, and death." We can learn more about these issues, offer our own voices in protest, and advocate for alternative energy sources.

Members of the Cowboy and Indian Alliance marched on horseback to protest the Keystone XL pipeline. Photo by Chip Somodevilla/Getty Images.

It's no secret that Native Americans have suffered at the hands of white supremacy and colonization through all of our country's history. But by amplifying voices like Marita GrowingThunder's, we can take inspiration from her story and her walk. And we can honor her 80-mile sacrifice by doing our part.