NASA made an adorable video explaining climate change. l think a lot of people will FINALLY get it.

You've probably *heard* that the earth is warming. But how do scientists actually *know* it's happening? 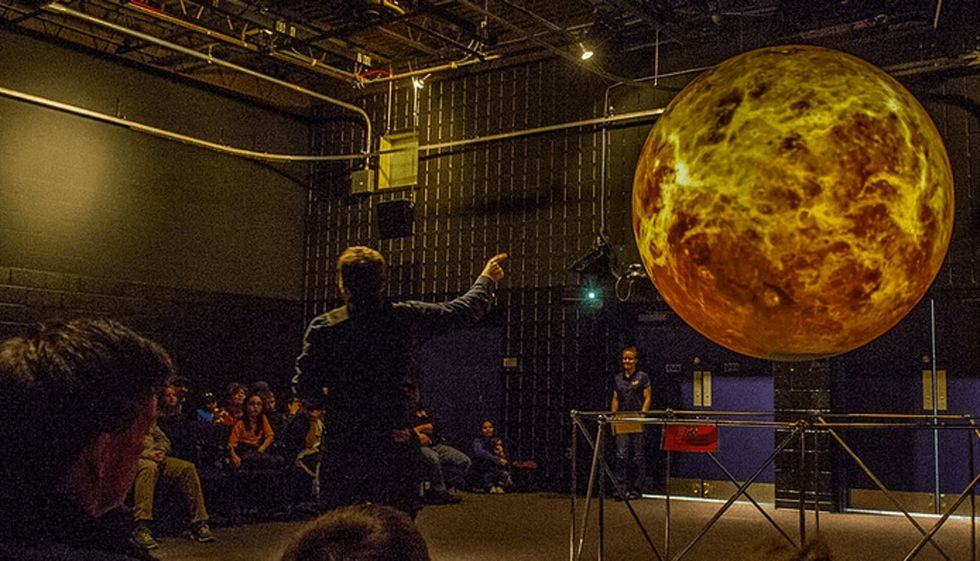 Here's your Hot Planet 101, courtesy of NASA. Take a minute to watch it, then we'll see how it's affecting life on earth right now.

If the symptoms of planetary fever are shrinking glaciers, rising sea levels, hotter heat waves, stronger hurricanes, and shifting plant and animal ranges, it's worth asking: Is that stuff really happening? Well, let's take them on one at a time.

1. Are the glaciers shrinking?

"The collapse of the Larsen [Ice Shelf] appears to have been due to a series of warm summers on the Antarctic Peninsula, which culminated with an exceptionally warm summer in 2002. Significant surface melting due to warm air temperatures created melt ponds that acted like wedges; they deepened the crevasses and eventually caused the shelf to splinter." — NASA Earth Observatory

Yo, this ice shelf the size of Rhode Island disintegrated in four months.

NASA's scientists estimate that the Larsen Ice Shelf Complex shed 2 to 4 billion metric tonnes into the ocean per year in 1996 and 2000. But in 2006, that increased a startling 10 times to 22 to 40 billion tonnes lost.

2. Are plants and animal ranges shifting?

Plants and animals get cues from the world around them. They know when to go dormant, where to grow, and when to reproduce by the temperature patterns around them.

As weather patterns change, those same cues lead them to live and breed in new areas. It might sound harmless, but scientists are concerned. Not every species is welcome in its new haunt.

But climate change is transforming the temperature trend lines across the United States, and species like the kudzu that normally stay in warmer climes are taking notice and slowly creeping their way north.

Many species that live in colder climates are simply migrating north as their stomping grounds become too warm for them. For some species, this is a gradual change, but for others, it's astonishingly fast ( the comma butterfly's habitat has shifted north nearly 7 miles annually over the last 20 years).

But this cutie pie (above — OMG, look at those ears!) lives in the mountains of the western U.S. The America pika can't fly to a new mountain range like a bird or butterfly. And because it can die from overheating in just hours, it can't hop to another zone either. It may just be doomed to slowly lose its habitat completely to warming.

Increases in sea level have tracked strongly with human activity. We started burning fossil fuel during the Industrial Revolution (1760-1850), and our use of coal, oil, and natural gas has increased every year. Sea levels, in response to steadily warming temperatures, also rose steadily.

Unfortunately, the sea level projections don't look like a straight line. It looks like an upward sloping curve. Sea levels aren't increasing at the same rate every year — that rate is increasing.

At present, sea levels are projected to rise by as much as 3 feet by 2100.

With the planet's ice reserves falling into the oceans faster than humanity has ever seen, the excess water has to go somewhere. 1.6 million people live in the islands scattered across the Pacific (3 million, if you count Hawaii), and they are all in danger of slowly losing their homelands.

Nearly 40% of Americans live in a coastal county.

The heat patterns that have emerged in the last 30 years have been shared across the globe. (I see you eyeing that big spike in the middle, but the extreme heat and drought that created the Dust Bowl was an anomaly almost exclusively experienced by North America.)

Global temperature has been rising since the end of the Industrial Revolution; there's no question about it.

It seems Earth's hottest days are ahead of it.

5. Have recent storms been more intense?

Damn skippy. In the 23-year period from 1980 to 2003, the National Oceanic and Atmospheric Administration recorded 58 weather related disasters that cost at or over a billion dollars in damages.

"But yesterday it was unseasonably cold, and there's a massive blizzard in the Northeast."

Well, weather and climate are different. Weather is an event. Climate is a pattern of events. Any one of these years is an example of a weather event, but the red line is climate pattern (warming, obvi).

It's time to take our medicine. Let's change the way we treat the planet so we can keep on having it.

Live green. Save your world.