Most nurses throw away caps and stoppers. She didn't. What she did instead is remarkable. 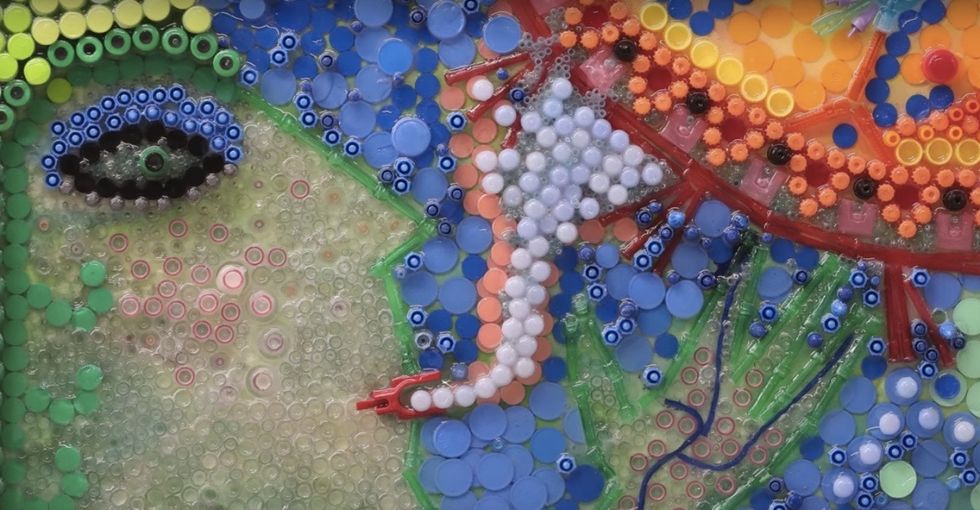 Back in 1987, her  first year as a nurse in the intensive care unit, Shalof noticed the connectors, medicine caps, syringe covers, stoppers, and tops left over from her daily work. They were bright, colorful, come in a multitude of shapes and sizes, and are completely sterile. Instead of just tossing the pieces, Shalof started a collection.

"I thought well, gee, they're so cute, they're pretty," Shalof told the Toronto Star. "They remind me of so much, so many moments I've had with patients. So I started to put them in my pocket rather than throw them out."

When her children were young, she'd use the pieces to help them learn to match and sort things by color and shape. Later, she used them for jewelry and craft projects. Over 28 years, Shalof was able to collect and store thousands of plastic pieces.

And after nearly 30 years, with the help of a friend, she finally figured out how to use them.

Shalof's friend, visual artist Vanessa Herman-Landau, came up with the idea of using the thingamabobs to make a large scale mosaic mural.

The friends set to work in the summer of 2015, lovingly placing the plastic pieces in ornate patterns and designs, then setting the entire piece in resin.

Take a closer look: You'll see a face, a hand, a bright sunburst, and more all made with upcycled plastic waste.

The finished work of art measures 4 feet by 9 feet, and is on permanent display at Toronto General.

For Shalof, completing the mural was also a goodbye and thank-you note to the colleagues and patients that meant so much to her, as she left her role at in the ICU to work as a radiology nurse at another hospital.

Whether it's a lifesaving medication, a simple act of kindness, or a mural composed of more than 100,000 pieces of plastic — small things can make a difference.

Not only did Shalof keep bags and bags of plastic out of the landfill, she created a moving, living tribute that can inspire other health professionals for years to come.

"I hope young nurses and young doctors see this and hopefully it makes them remember that all these little things we do are huge for the patient," Shalof said. "We do it hundreds of times a day and night for all of these years, but each thing that we did with each little piece of plastic meant so much to the patients and that's really what this mural represents."

See Shalof talk about her journey as a nurse and (part-time artist) in this video from the Toronto Star.