More than 150 women stood up and exposed Larry Nassar's unforgivable crimes to the world. 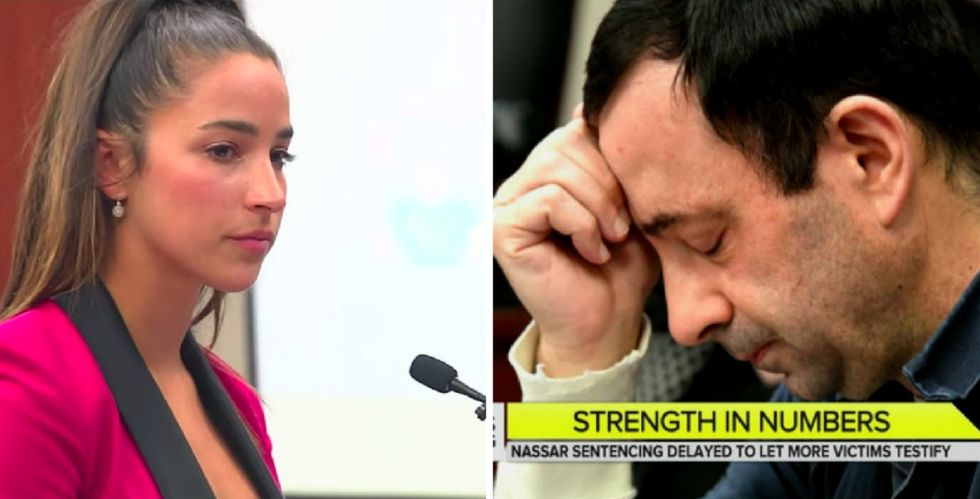 The women who bravely faced Larry Nassar in court deserve our respect and attention for changing the course of a criminal tragedy people were too willing to ignore.

Nassar was sentenced to 40 to 175 years in prison after their testimony dramatically changed the course of his sentencing hearing. He'll spend the rest of his life behind bars thanks to their courageous actions.

Nassar, the former USA Gymnastics national team physician, had already been sentenced to 60 years in prison after pleading guilty to charges of child pornography. His crimes are major news but weren't receiving significant attention until so many women — more than 150 — came before a judge to offer personal statements against him.

Because of them, he now faces up to 175 years in light of sexual assault charges.

"Imagine feeling like you have no power and no voice. Well, you know what, Larry? I have both power and voice, and I am only just beginning to use them."

Nassar tried to avoid hearing those statements in the courtroom, but the judge wasn't having it.

Ingham County Circuit Judge Rosemarie Aquilina ensured every woman had a safe platform to be heard. "It is so important what you've done," Aquilina told 16-year-old Chelsea Zerfas. "I am so very proud of you. This doesn't define you. This strengthens you."

The statements made by Zerfas and so many others brought attention and accountability to a system that allowed Nassar to stay in power even as more than a dozen Michigan State University staffers allegedly knew of his abuses going back to 1992 but did nothing.

Each day brought another shocking revelation about a system that protected Nassar.

Before giving her statement to the court, Maroney filed a lawsuit alleging that USA Gymnastics paid her a "confidentially agreement" to not discuss the Nassar allegations in public. The organization eventually put out a statement assuring that she would not face any fines or other retribution for speaking out against Nassar.

One teen gymnast revealed she was even still being billed for medical appointments with Nassar despite accusing him of sexual abuse. 15-year-old Emma Ann Miller told the courtroom:

Miller's bravery led MSU officials to announce that Nassar's former patients will no longer be billed for visits. The university is also reviewing whether to reimburse past patients who had already paid for services billed.

Nassar will now spend the rest of his life behind bars.

And the women who stood up to speak out against him have challenged us all to help ensure crimes like this never again stay hidden for so long.