Meet the former Army officer who rallied thousands of veterans to Standing Rock. 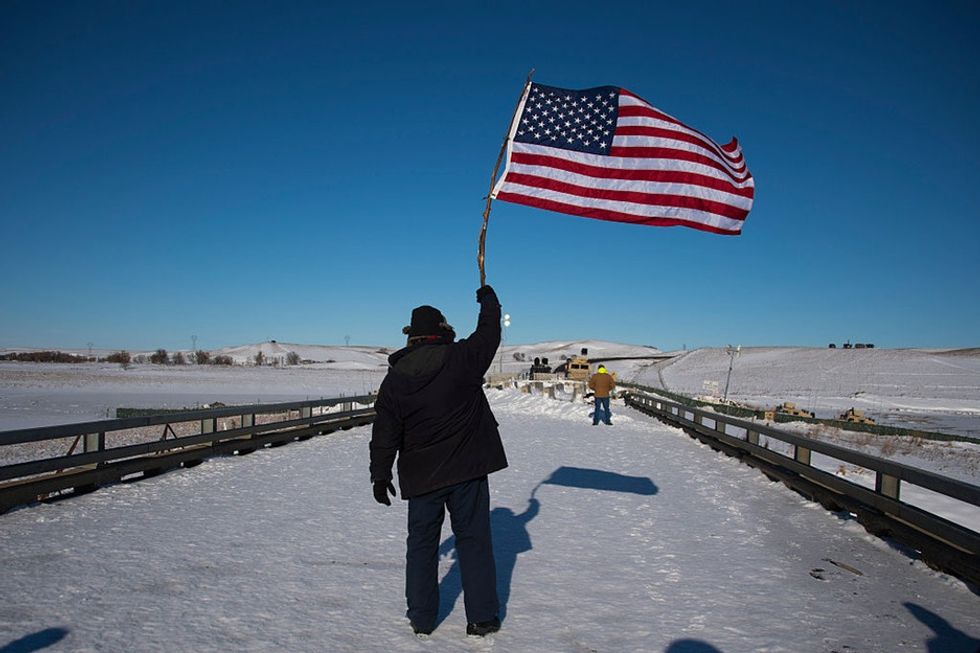 Wes Clark Jr. is about as close as it gets to U.S. Army royalty.

The son of a renowned four-star general, Clark was born while his father was still fighting in Vietnam. He grew up at various Army bases all across the country before attending Georgetown University's School of Foreign Service, followed by four years of active duty as a cavalry officer.

Wes Clark Jr. (left) with his father on the Democratic primary campaign trail in 2003. Photo by Michael Springer/Getty Images.

When 9/11 happened, Clark was living in New York City. He was eager to re-enlist, but his father talked him out of it. Since then, Clark has looked to other ways of making the world better. Now he's a writer, a climate activist, and a co-host of the popular political web series "The Young Turks."

Clark had been following the ongoing Dakota Access Pipeline conflict for months. As he watched the news, he became more and more enraged.

To Clark, this wasn't just a violation of human rights. It was an insult to veterans like him and his family.

Why? Because despite their continued mistreatment by the U.S. government, Native Americans have been fighting in the American armed forces for 200 years at very high enlistment rates.

Yankton Sioux veterans received the Congressional Medal of Honor in 2013 on behalf of their tribe's contributions as code talkers during World War I. Photo by Chip Somodevilla/Getty Images.

"First Americans have served in the United States Military, defending the soil of our homelands, at a greater percentage than any other group of Americans," Clark wrote. "There is no other people more deserving of veteran support."

Clark took an oath when he joined the Army. He swore to "support and defend the Constitution of the United States against all enemies, foreign and domestic." And by that oath, he believes he and his fellow veterans should be defending the Standing Rock Sioux from the human rights violations perpetrated against them in the past months, both from police departments and private security forces.

Clark put his uniform back on and organized the movement Veterans Stand for Standing Rock. On Dec. 3, 2016, he and his troops left for North Dakota.

The veterans made a plan to join the Standing Rock Sioux in ceremony and prayer at the Oceti Sakowin camp, then form a human shield around the water protectors in direct nonviolent action against the pipeline construction.

"We are there to put our bodies on the line, no matter the physical cost, in complete non-violence to provide a clear representation to all Americans of where evil resides," the co-organizers wrote in the group's official mission briefing.

"We’re not going out there to get in a fight with anyone. They can feel free to beat us up, but we’re 100% nonviolence," Clark added in an interview with Task & Purpose.

The Oceti Sakowin Camp near Cannon Ball, ND after a snowfall. Photo by Scott Olson/Getty Images.

More than 2,000 veterans joined the cause — many more than the 500 they had originally had hoped for.

The veterans arrived on Dec. 4, and everything went according to plan. There were sage cleansings...

...and a human barricade to protect people from a police line.

By evening, the U.S. Army Corps of Engineers had denied an easement for the pipeline's construction, putting its future in doubt.

Of course, the main credit for this victory should stand with the steadfast water protectors who have been camped out for months and who struggled for decades before that, too. But the massive veteran presence certainly helped.

Last night, on the veterans' first day at camp, there was celebration — but the battle isn't over.

Energy Transfer Partners, the main company behind the pipeline, is still refusing to back down — and given recent violence in pursuit of ETP's goals, it would be foolish for the water protectors to turn their backs just yet. Which means that both the camp and the veterans will remain in place, perhaps indefinitely.

The men and women who serve this country in uniform have always understood the "American experiment" is a work in a progress — and our Native American brothers and sisters have always been intimately aware of just how fragile that experiment can be. But they can all agree that environmental destruction and state-sponsored violence are not compatible with the ideal of freedom on which the country was founded.

As one tribal elder said during Sunday's celebration: "Tomorrow we fight, tonight we dance."