John Oliver Chugs Some Vodka To Prove A Point About America's Horrible Education Scam, The Lottery

Confession: My family has a rich history of being addicted to gambling. So this hits home for me. Nationwide, state lotteries are marketed as a cure-all to help fund education. The reality is that not only are they not helping, they actually make things worse. At 8:39, you can learn just one of the many stories that make them a blight on our community. And at 11:40, you can learn the truth about how they actually don't help at all as John Oliver explains what North Carolina did with their money. If you live in the U.K., the corporate media overlords blocked this video, and I'd recommend installing this to never be blocked again. 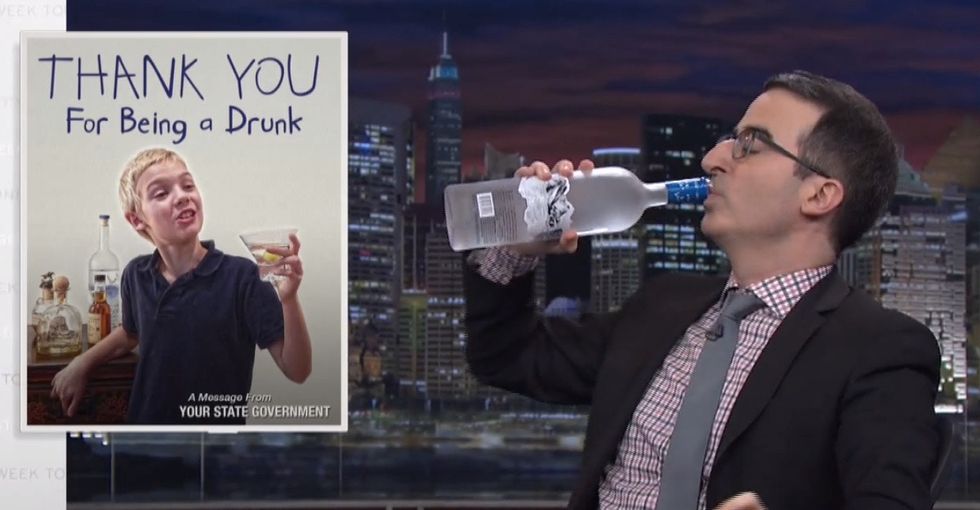 The math on this seems pretty simple. 21 of 24 states with education-funded lotteries actually didn't increase or decreased school funding. If all the money is being taken from poor people, and they are cooking the books to make it so no actual growth in education funding is being met, and they are giving huge tax breaks for corporations in its place, maybe it's not such a good idea. You are robbing Paul to pay Peter, only this time Paul was already broke and Peter's a teacher who actually deserves to have better pay and smaller classrooms, only he can't because you gave some other guy in a fancy suit all the money you were gonna pay Peter.

Now you may be saying to yourself, "But, Adam, if poor people just stopped buying lottery tickets, it wouldn't be a problem." To which I respond with, "But Internets person, they are actively targeting poor people and selling them a dream and making it easier to bankrupt them thereby making them even poorer and thereby helping to collapse our economy. I'd much rather education get funded properly instead of finding an easy loophole from which corporations can escape from at their leisure."

So do me a favor and help make sure the Internets understand that lotteries are awful. I'll owe you one. As long as I don't buy a lottery ticket, I'll be able to pay you back.