It's rough out there for people who don't love their body. This blogger wants to change that.

'Every single baby step toward positive body image and attitude should be celebrated.' 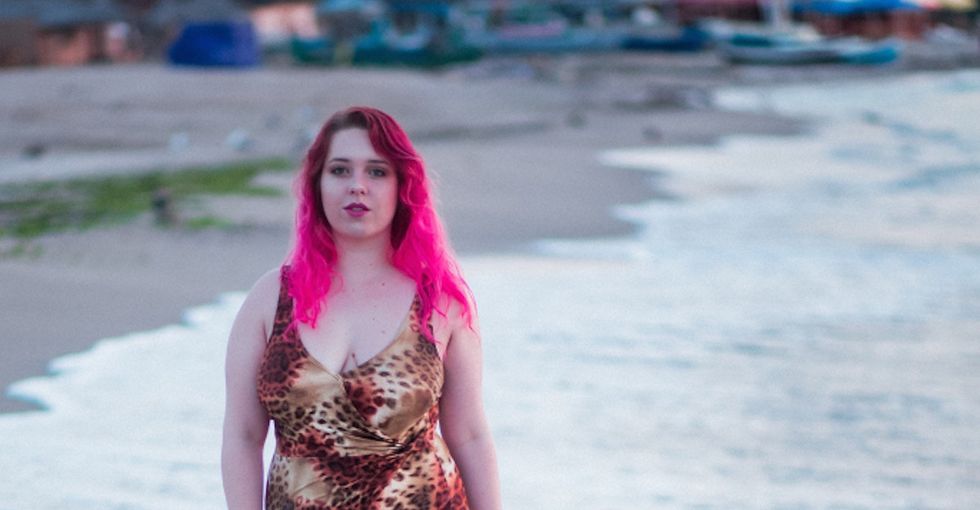 Posting these real photos of myself is one of the scariest things I've ever done.

These photos are untouched. All photos taken by Emil Costrut, provided by me.

But I'm doing it anyway, and here's why.

I'd love to be one of those people who doesn't care about what others say about me.

But when you're already insecure to begin with, having those insecurities mocked is a little bit difficult to overcome. I've been called "ugly," "fat," and "gross" many times over the years, both online and in "real life."

If you keep hearing these things often enough, you have to make quite a big effort to stop believing them; only then can you still feel beautiful.

But it took some time to get here.

When I was little, I was skinny — the kind of skinny that caused people to jokingly ask my mom why she wasn't feeding me. Then, one New Year's Eve, I got a very bad case of food poisoning, which lead to my hospitalization.

The hormone they used to kick start my liver (which had failed) caused weight gain, so much so that a few months after leaving the hospital, I weighed almost twice as much as before.

I started feeling insecure about my body when I was in primary school.

Some people say small kids are angels, but I beg to differ. No one can be quite as cruel as a kid. I was bullied for my weight, for my teeth, for my style. At that age, it was very hard not to listen.

Even when I was a child, I always loved browsing through my mom's glossy magazines. They were a safe place for me for a long time, especially when I was being bullied.

However, no matter how many pages I flipped, I never saw anyone who looked like me. My body type was only given as a negative example, as something you had to get rid of, as something that was mocked by society. The "juiciest" news in tabloids, besides sex scandals, came when a celebrity gained weight.

As a developing teenager influenced by what society defined as a model and ideal body for women, I became obsessed with my weight.

There were several years during which I felt worthless, unlovable, and ugly because I thought the only thing that mattered was being skinny. At one point, it got so bad that whenever I entered a room, I would first analyze everyone to see if I was the heaviest in the room.

Even now, it's very hard for me to lose weight. That's why my biggest fear for years, since I've been blogging, was that people would see what I really looked like and judge me.

It's easy to hide a little extra weight with the right clothes, the right angles, and Photoshop. We've never edited anything excessively on my blog, Wings for Liberty. But from today on, I don't want to liquify anything at all, not even a little bit.

Why am I sharing these photos of myself?

Because I want curvy teenagers like me to be able to see girls like themselves, all prettied up in fancy clothes and photos.

I want them to feel proud of their bodies. Some days it's hard to not listen to the mean voices, but if you don't learn love yourself, who will?

It's not going to happen overnight. Dark thoughts tend to linger much longer than the good ones.

But every single baby step toward positive body image and attitude should be celebrated. Your beauty and value are represented by so much more than your body.

By posting these photos of myself, I'm facing my biggest fear so that I can kill, once and for all, my biggest insecurity. I am honest and unedited in these photos, both in my body and thoughts.

Most importantly, I'm proud of how I look.