How Hawaii turned its amazing surfing into renewable energy. 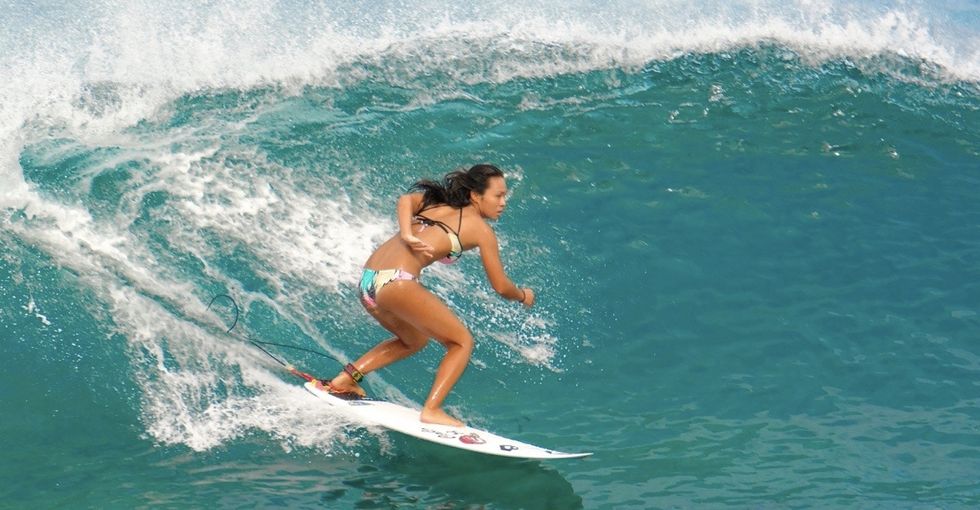 Hawaii is basically where good little surfers get to go when they die.

I mean, can you ask for a more picturesque location? Warm weather, sandy beaches, the majesty of the Pacific Ocean right in front of your face. Imagining standing there, watching those beautiful, aquamarine waves roll in … man, you can’t help but feel a little amped up, right?

But now, those waves are electrifying more than just surfers. They're also powering homes.

In Kaneohe Bay, barely noticeable from shore, two wave turbine machines bob in the surf. Since this summer, they’ve steadily been producing electricity, funneling it back through undersea cables to a nearby military base and onto the Oahu power grid.

These are the United States’ first grid-connected wave energy generators. They were set up by the Navy, which is interested in testing them as power sources for refueling stations and remote communities.

If they work,  communities all across America’s coastlines could use them, not just the Navy.

An expert shows off a model of the devices. Photo from Cathy Bussewitz/AP.

The first is called Azura, and it looks kind of like a hefty version of a football goalpost. The other’s called Lifesaver, and it looks, well, kind of like a huge lifesaver. The researchers are putting the devices through the gauntlet to see which design will most reliably put out power and withstand the ocean’s tremendous forces and corrosive salt spray.

Between the two, they’re producing about enough energy to power just over a dozen homes right now. But later versions might be able to juice up hundreds of homes at a time, and they could be set up in big groups as well.

Imagine if these generators were set up on every coastline.

"When you think about all of the states that have water along their coasts ... there's quite a bit of wave energy potential," the AP quoted Jose Zayas, a director of the Wind and Water Power Technologies Office at the U.S. Energy Department, as saying. He also suggested that if we were to really get our heads in the game, 20% to 28% of all of our electricity could eventually come from the ocean.

Other researchers are currently planning on building test sites in Oregon and California, too.

That said, wave power is one area of renewable energy where we’ve been lagging behind in the U.S. We’ll need to build a more large-scale infrastructure — something other countries are already doing — if we actually want to make this work. In Scotland, for example, they have been experimenting with wave and tidal energy for more than a decade.

A wave energy device in Scotland. Photo from P123/Wikimedia Commons.

The good news, though, is that we can learn from other countries’ experiences and use them as a guide as we try to get in the game.

Hawaii has given itself a mandate to be completely powered by renewables by 2045, which is a huge goal.

It's a smart plan for the collection of islands because otherwise they have to rely on giant, expensive container ships to deliver fossil fuels.

The ocean is one of the greatest natural wonders on our planet, and it has given us so much — food, transportation, and, yes, totally amazing surfing spots. And if we keep focusing on the ocean, maybe it can give us renewable energy, too.