How door-to-door political campaigning restored my faith in humanity.

"The truth is that the real work of politics, the stuff that wins elections, isn’t exciting." 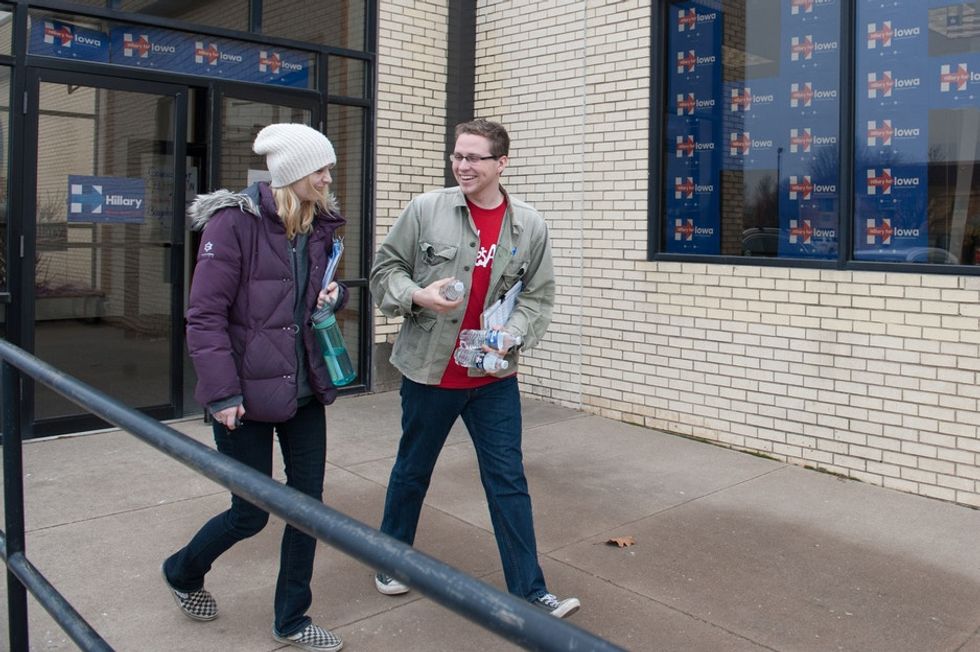 I’ve seen a lot of elections, but I’ve never seen anything like 2016.

No matter where you fall on the political spectrum, chances are that your feelings about this race are strong.

Case in point: Protesters at a Donald Trump rally in San Diego getting in a massive fight in May. Photo by Mark Ralston/ AFP/ Getty.

With just 21 days left, I wanted to know what I could do to make sure my voice was heard. Of course, I would vote. But what else? Not everyone can donate money. And because social networks like Facebook are engineered to show you opinions they think you’ll agree with, posting isn’t always making a huge impact, either.

The race has been so negative at times, it’s hard to not feel cynical.

But because the choices feel so stark to me, I knew that couldn’t stop me. I kept asking myself this question: "How can I help?" So I decided to try volunteering for a candidate.

Volunteers have been the difference in winning and losing a lot of elections. Barack Obama would have lost Florida and North Carolina if it weren’t for his volunteers. People who cared enough to get involved turned the tide of the election, and I wanted to be one of those people.

That’s how I found myself going door to door in New Hampshire, talking to people I’d never met about politics and policies.

I want you to know that personally, I support Hillary Clinton, but that doesn’t matter much for this story. What I learned was that it’s important to get involved in the things you believe in, not to suggest who others should vote for.

Because Massachusetts is a blue state, I decided to drive to a nearby swing state where my time ringing doorbells would have the biggest impact.

I arrived at Hillary’s campaign headquarters in Manchester, New Hampshire, on a Saturday. It’s a quiet New England city, the kind you see in postcards. The people are friendly, but the economic analysis shows this is an important election for the city. Wages have been stagnant for the last decade, and child care costs are among the highest in the nation. The decision about our next leader will strongly affect Manchester.

Walking in the door of the headquarters was hugely encouraging.

It was packed with millennial volunteers, which seemed like a stark contrast to the “millennials are apathetic” commentary I’ve been hearing on the news. After a rallying speech, we were given a quick orientation session, handed packets with addresses, and dispatched to go knock on doors.

I was paired up with Josh Query, a friendly ceramics major in his 20s.

World, meet Josh. Photo by me, used with permission.

Josh was an experienced canvasser, and he said he loves volunteering because he’s made so many friends. He says there’s a place for anyone to get involved in a campaign.

“Phone banking is one of the most valuable contributions if you don’t want to go face to face,” he told me as he led me down the street to our assigned neighborhood.

Canvassing is not the place for a hard sell. Lecturing people about who to vote for can feel both rude and ineffective.

I learned, instead, that the secret to all of this was in listening more than I talked. Canvassing neighborhoods showed me how much (or little) interest people have in politics. I was surprised that the majority of people I talked to didn’t have strong preferences, and they were shy in voicing them.

My husband, Frank, and our new BFF, Josh, after a nice conversation with a nice person. Photo by me, used with permission.

Quinn Rose, a Boston college student who was volunteering with us in New Hampshire that day, echoed my sentiments. “I was surprised by how nice everyone was, even when they disagreed with me. So it ended up being a really interesting and positive experience,” she said.

In the end, I was most surprised at the civility of people, even when we disagreed.

One house I canvassed had a gorgeous golden retriever that playfully barked at me as I knocked on the door. Over the fence, I could see a father playing in the backyard with his two blond daughters. It was one of those heartwarming moments where you could tell he loved being a dad.

“Sorry! I’m on the Trump train,” he told me. “Thanks though, and good luck with the election!”

In the middle of a presidential cycle that increasingly feels like an apocalypse, it was an amazing moment. I probably don’t agree with that man on much, but ultimately, he just wants what’s best for his family.

It’s a good reminder that through all the acrimony of the election, there are real people on the other side.

Of course, I had weird conversations, too. But despite all that, it was an immensely gratifying day.  As my husband and I were finishing up the last few streets of our second canvassing packet, we heard music in the distance. Like a reward for our hard work, an ice cream truck pulled up. Frank and I devoured ice cream, and then drove back to Boston.

Serendipitous ice cream! Photo by me, used with permission.

In a frustrating election like this, it felt really good to actually do something. I felt less helpless and more engaged in our actual democratic process. I felt like I had a say in what will happen to our country, even for just a day.

Query, my partner, agreed with me. “There are so many ways to help,” he said. “[People] can drive people if they have a car. They can open their homes for community events. 'I have work and school and you do, too, so let’s work together and do what we can to help out.'”

I know a lot of you might feel cynical about politics as this election drags on.

But the system wants you to be cynical because then you don’t get a voice, and the status quo continues.

The truth is that the real work of politics, the stuff that wins elections, isn’t exciting. It’s walking around. It’s registering people to vote. It’s knocking on doors. It’s listening to people. It’s mundane but deeply fulfilling. And it’s desperately important.

Maybe it's because I'm a writer, but I'm a bit of a pen snob. Even if I'm just making a list, I look for a pen that grips well, flows well, doesn't put too much or too little ink into the paper, is responsive-but-not-too-responsive to pressure, and doesn't suddenly stop working mid-stroke.

In other words, the average cheap ballpoint pen is out. (See? Snob.)

However, Oscar Ukono is making me reevaluate my pen snobbery. Because while I'm over here turning up my nose at the basic Bic, he's using them to create things like this:

Keep Reading Show less
science
Get stories worth sharing delivered to your inbox
By signing up you agree to Upworthy's privacy policy.
Trending Stories
politics
Culture