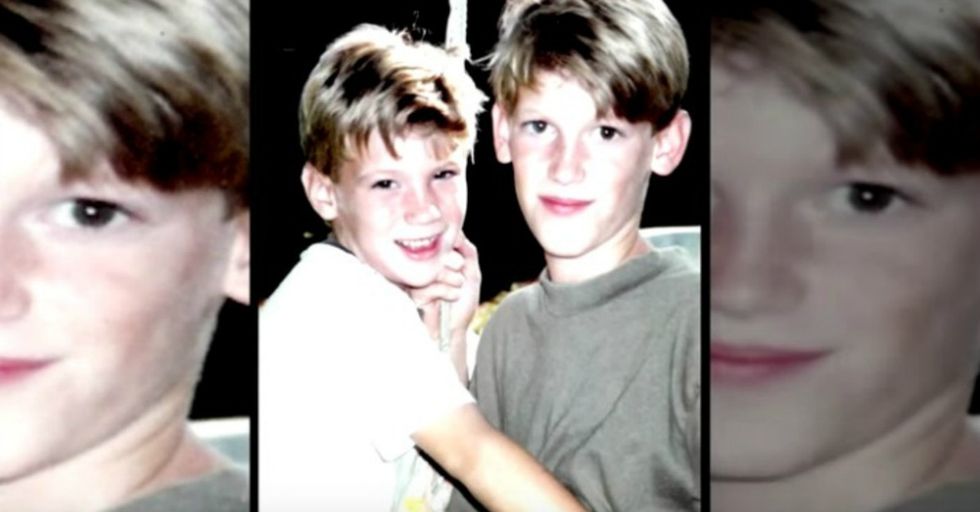 This article originally appeared on 03.07.16

A childhood game can go very wrong in the blink of an eye.

“Freeze! Put your hands up."

If you've ever played cops and robbers, you know how the game goes.

John Arthur Greene was 8 and he was playing that game with his older brother Kevin. Only the two brothers played with real guns. Living on a farm, they were both old hands at handling firearms by their ages.

The blast from the gun must have startled them both.

“We were always extremely safe. They were never loaded," John said.

Except this time it was. And John's brother died in his arms while he watched.

It happens more often than you would ever want to imagine.

In federal data from 2007 to 2011, which is likely under-reported, an average of 62 children were accidentally killed by firearms per year.

Here's a chilling example from Everytown for Gun Safety:

"In Asheboro, North Carolina, a 26-year-old mother was cleaning her home when she heard a gunshot. Rushing into the living room, she discovered that her three-year-old son had accidentally shot her boyfriend's three-year-old daughter with a .22-caliber rifle the parents had left in the room, loaded and unlocked."

And the numbers may actually be getting worse.

With an increase in unfettered access to guns and philosophical opposition to gun regulations, the numbers seem to be on the rise. Here's how many accidental shootings happened at the hands of children in 2015 alone, by age:

If the pace holds up for the rest of the year, America would be looking at over 300 accidental shootings of children, in many cases by children, for the year. That's far too many cases of children either carrying the guilt and pain of having shot a loved one or hurting or killing themselves by accident.

John Arthur Greene has been able to manage his feelings of guilt and sorrow through music and by sharing his story for others to hear.

He told his story during an audition for the final season of "American Idol." He says music has helped him keep his brother's memory alive:

"Right now I lift him up every day and he holds me up. Music is how I coped with everything."

It's a powerful reminder. No matter how we each feel about gun safety laws, guns should always be locked away unloaded and kept separately from ammunition.

Our babies are too precious to leave it to chance.

Little boy and his mom get the surprise of a lifetime: tickets to the Eagles game

"I hate telling people no, especially when I can help."

Little boy and his mom get surprised with tickets to Eagles game.

In today's world, it's easy to get caught up in all the negative news we're exposed to, but in reality, most good deeds are done away from a camera—just one person helping another without desire for fanfare. And for mom Bryanne McBride and her young son, Mason, that's exactly what they were doing when they got the surprise of a lifetime.

Bryanne was approached by a man in a parking lot asking for a dollar to catch the bus. The entire time, the mom scrounged around in her purse looking for spare change and revealed she felt bad because she thought she had some. Bryanne's desire to help was a simple act of kindness to another human in need without the expectation of something in return.

During the time it took for the unsuspecting mother to dig for loose change, the "stranded" stranger, Zach, introduced himself and asked if the duo were from Philly. Once they said they were from the area, he then inquired if they were Eagles fans...the football team, not the birds. "You ever been to an Eagles game?" Zach asked.

In a video interview originally posted in 2020, a woman named Kirsten Carlson gave some insight into this question, sharing how not having an inner dialogue affected her reading and writing, her interactions with others and how she navigates mental challenges like anxiety and depression. It was eye-opening and mind-blowing.
Keep ReadingShow less
neurodivergence
Community

See how the people of Yakutia, Siberia take showers, do laundry, go to school and more in minus 58 degrees Fahrenheit.

A man in the Yakutia region of Siberia takes an ice bath in minus 50 degrees Celsius.

For most of us, waking up to a temperature of minus 50 degrees would spell catastrophe. Normal life would come to a screeching halt, we'd be scrambling to deal with frozen pipes and power outages, school and work would be canceled and weather warnings would tell us not to venture outside due to frostbite risk.

But in the Yakutia region of Siberia, that's just an average winter day where life goes on as usual.

When you live in the coldest inhabited area on Earth, your entire life is arranged around dealing with ridiculously cold temperatures. Villages don't have running water because freezing pipes wouldn't allow for water treatment. Kids go to school unless the temp drops below minus 55 degrees Celsius (which is then considered dangerous). Showering involves spending hours stoking a fire in the bathhouse to create a steamy, warm room.

Native Siberian Kiun B. has created a series of documentary short films detailing what daily life is like in Yakutia's frigid winters. She was born and raised in Yakutsk, Siberia, widely recognized as the coldest city on Earth, where average winter temperatures hover around minus 30 degrees Fahrenheit. As seen in her videos, smaller villages in the Yakutia region regularly dip down into the negative 50s, with the lowest recorded temp in the Yakut village of Oymayakon reaching a mindblowing minus 96 degrees Fahrenheit.

The popularity of Kiun's YouTube channel demonstrates how curious people are about life in such harsh conditions, as her videos have been viewed by tens of millions of people in the past year alone.

Check out this video detailing a day in the life of a family in a Yakutia village.

Can you imagine going out to use an outhouse in minus 40 degrees? Oof.

Another of Kiun's videos goes into more detail about how people shower and do laundry in the region. You might assume they wouldn't line-dry their laundry outdoors, but they do.

What do people wear to protect themselves from the negative temperatures? Frostbite is a real risk, so it's important to have the right kinds of clothing and outdoor gear to stay safe and relatively comfortable.

Kiun shared some frigid fashion norms from Yakutsk, which include traditional fur hats and boots as well as lots of layers and down jackets.

However, there are some Yakut folks who see the cold as something to embrace. For instance, this man takes an ice bath out in the elements as a morning ritual. It's something he has worked up to—definitely not something to try on your own during a cold snap—but it still has to be painful.

The way humans have learned to adapt to drastically different environments, from the sweltering tropics to the Arctic tundra, is incredible, and it's fascinating to get a close-up look at how people make life work in those extremes. Thank you, Kiun B., for giving us a glimpse of what it's like to experience life in the dead of winter in the world's coldest inhabited places.

From Your Site Articles
culture