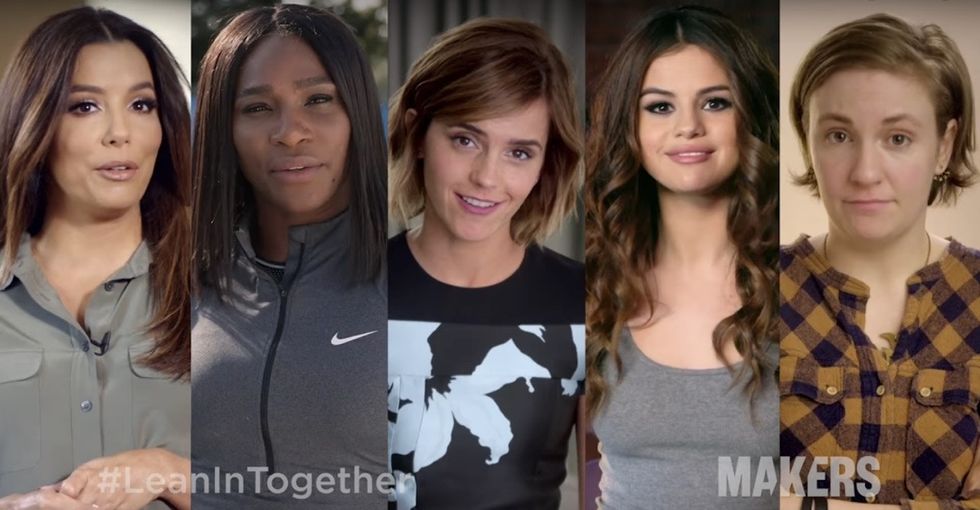 By every measure, they are talented, strong, and working at the top of their respective fields. But they didn't achieve their success alone.

That's why they've come together, along with some of the biggest names in Hollywood and athletics, to say thank you to the women who got them there.

Together Women Can is a public awareness campaign from Lean In and Makers about the power of women supporting each other.

The campaign kicked off with Williams, Watson, Washington, and other stars — including Lena Dunham, Selena Gomez, Abby Wambach, Megyn Kelly, and more — sharing their personal experiences about the role of female mentors. Whether it's a director, friend, producer, or even a sister, these relationships boosted their confidence and helped them reach professional heights they never thought possible.

For Emma Watson, the woman in her corner is acclaimed director and writer Sofia Coppola.

All GIFS via Lean In/YouTube.

And Selena Gomez couldn't help but thank her whole squad.

Having strong women in your corner isn't a perk of the rich and famous. Female mentors and allies are something women of all stripes can benefit from.

And the data doesn't lie.

In the workplace, women are given less credit for their work and suggestions. Women are interrupted more, (not just by men) and are often given less time to speak. Women's performance is often underestimated, and we're frequently passed over for raises, promotions, and plum assignments. And when women try to assert themselves or speak more confidently and directly, we often receive pushback for being too aggressive or unlikable, feedback most men wouldn't receive for the same behavior.

That's why it's so vital that women work together and support one another.

Together we are a force to be reckoned with. We are smart, strong, funny, and fierce. Capable of running the boardroom, the backcourt, or the Broadway stage. When women celebrate each other's accomplishments, mentor and support young women on the rise, and encourage one another, there's nothing we can't do.

At the same time, "leaning in" isn't a silver bullet for solving poverty or ending years of institutional sexism, but forging these relationships in the workplace is the first of many tools we can use to support one another and fight for gender equality.

No matter your gender or where you are in your career, we can all do our part to ensure women are heard, respected, and promoted in the workplace.

More voices means better ideas, stronger teams, and improved morale. It's a win for all of us. Because when it comes to equality and changing the status quo:

Watch their powerful messages and #LeanInTogether with the women who lift you up.