He was yelling for help, begging for the beating to stop. Now his classmates have his back.

A campus comes together in solidarity with their classmate after he was beaten by police.Trigger warning: graphic visuals of police violence. 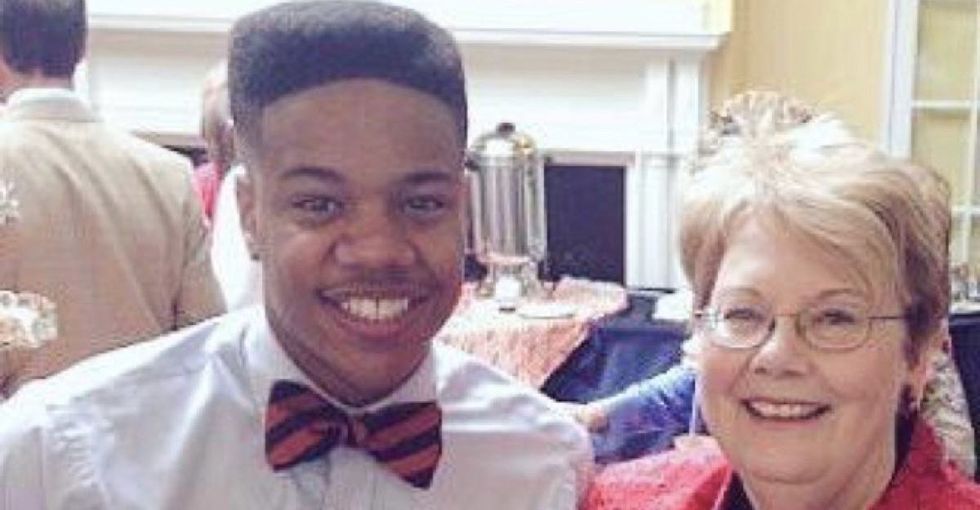 After a video surfaced of police beating 20-year-old University of Virginia student Martese Johnson, his classmates, teachers, and school administrators rallied together in solidarity.

The beating filmed in the video took place after police went to apprehend Johnson, who had been denied entry to a bar for allegedly using a fake ID. He was arrested and charged with resisting arrest, obstructing justice without threats of force, and profane swearing or intoxication — two misdemeanors.

UVA students mobilized, rallying on campus to demonstrate their support for Johnson and demanding answers.

Mary Topp, a third-year student at UVA, tweeted a picture of the massive gathering of students standing in solidarity with their beaten classmate.

Many were quick to point out that Johnson had done things "right."

This logic pulls from the common argument that violence against people of color is avoidable if the victim had looked or presented a certain way. The implication there is that violence is justified when someone doesn't look or behave in that way. See the problem?

That argument is racist (even if it isn't meant to be racist) because it dehumanizes the individual and apply stereotypes about how black people should behave and dress in place of reality.

And not only that, it simply isn't true. Here was Johnson, the only black member of the school's Honor Committee, finding himself in what has become an all-too-familiar scenario: on the ground and bloodied at the hands of the police. He did everything "right," but it didn't matter.

Others noted the disparity between how police treat white people and how they treat people of color.

University president Teresa Sullivan was on hand to show support for Johnson and the rallying students.

Sullivan sent out a letter to the university on Wednesday offering her full support and calling on the campus to stand united with Johnson.

“The safety and security of our students will always be my primary concern, and every member of our community should feel safe from the threat of bodily harm and other forms of violence. Today, as U.Va. students, faculty and staff who share a set of deeply held values, we stand unified in our commitment to seeking the truth about this incident."

A spokesperson for the governor told BuzzFeed that McAuliffe has authorized an investigation into the question of whether or not the officers used excessive force.

What happened to Johnson was reprehensible, but the response has be heartening.

Our culture remains largely indifferent to the lives of black men and women. Some victims of this brutality — like Johnson — have survived; others — like Eric Garner, Mike Brown, or even 12-year-old Tamir Rice — died at the hands of the authorities charged with protecting them. "Black lives matter" is more than a hashtag; it's a reality that eludes so many people in positions of power, and that's why it needs to be repeated over and over.

Martese's life matters. Black lives matter, and the students rallying in support of Johnson are doing their part to make sure the world learns this precious fact.

And here's the video of Johnson's arrest. Trigger warning: audio and visual of violence, profanity.