HeLa cells have saved millions of lives, but they were taken without her consent. 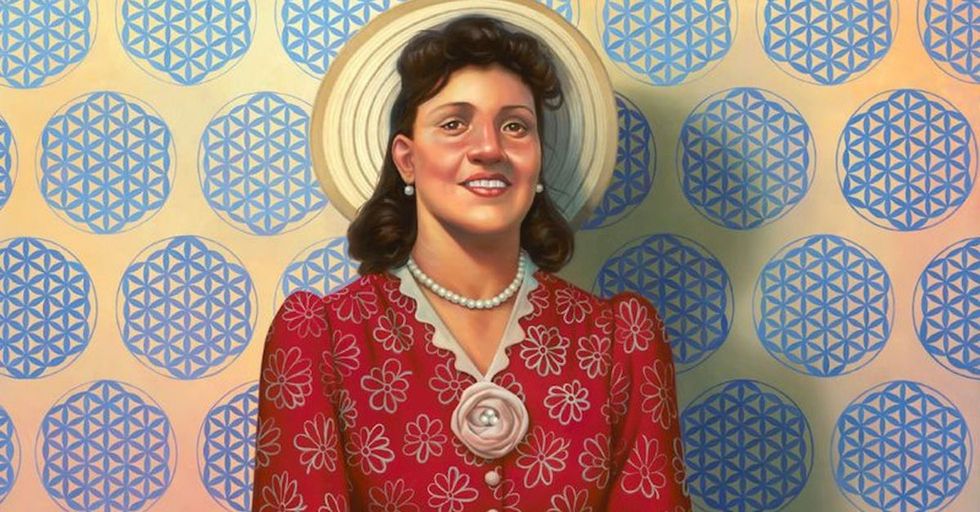 When Henrietta Lacks died of cancer in 1951, she and her family had no idea her tragic passing would change the world.

Shortly before her death, scientists harvested cells from her body that would directly lead to breakthroughs in AIDS research, leukemia, flu treatments, and the polio vaccine.

Then, most cell samples taken from patients quickly deteriorated. The samples taken from Lacks, however, proved "surprisingly robust," allowing them to be replicated in labs countless of times. Perhaps just as importantly, those unstoppable "HeLa" cells allowed scientists to continue research, but not have to experiment on other people.

But Lacks, the granddaughter of slaves, never knew her cells were being harvested because doctors didn't tell her. Getting her consent to use her cells for tests beyond Lacks' own medical treatment apparently never occurred to those who used them for their later research, and subsequent profits, over the years. Her family also didn't know about her historic contributions to science for more than two decades until a relative stumbled upon the open secret after the brother-in-law of a family friend spotted the connection to a National Cancer Institute study.

That discovery, and the attention that followed, helped shine a spotlight on medical consent as well as the often forgotten groundbreaking contributions of black women.

Today, it seems almost imaginable that someone would take your medical history, let alone your actual cells, without permission. That they were taken from a woman of color only compounded a massive ethical hole in medical science that forced researchers to not only think about the potential of test subjects, but also the ethics of how that vital material is obtained.

We may never know precisely why doctors didn't feel obligated to tell Lacks or her family about her contributions. Whatever those reasons may be, even if it was just a general lack of consideration, sadly aligned with a history of not acknowledging the huge role of black women in American history.

But since, there has been a sustained effort to right this historic wrong and give Lacks' the credit she deserves.

Her family first became aware of Lack's ever-growing legacy back in the 1970's, but there has been a steady effort to tell her incredibly important story to the world. There's a best-selling book, "The Immortal Life of Henrietta Lacks," and a 2017 HBO film of the same name starring Oprah Winfrey.

And now, the National Portrait Gallery honored her with a beautiful life-sized portrait.

We're proud to share this Kadir Nelson portrait of Henrietta Lacks with our friends at @NMAAHC . The striking posthumous portrait was inspired by two surviving photographs that are now in the possession of her family. Commissioned by HBO on the occasion of the HBO movie premiere of "The Immortal Life of Henrietta Lacks" by Oprah Winfrey and Alan Ball, Nelson wrote of the portrait, “I elected to paint a prideful and glowing portrait of Henrietta Lacks, who is often referred to as, ‘The Mother of Modern Medicine,’ visually juxtaposing art and science. She stands with her beautifully manicured hands crossed, covering her womb (the birthplace of the immortal cell line) while cradling her beloved Bible (a symbol of her strong faith). Her deep red dress is covered with a vibrant floral pattern that recalls images of cell structure and division.” Other symbolism includes her bright yellow hat, which functions as a halo, her pearls as a symbol of the cancer that took her life, and the repeated hexagonal wallpaper pattern, a design containing the “Flower of Life,” an ancient symbol of immortality and exponential growth. The buttons missing from her dress reference the cells that were taken from her body without her permission #myNPG

"This is amazing!" Lacks' granddaughter said at the portrait's unveiling. "Soon as you walk through the doors, there she is!"

The portrait by artist Kadir Nelson will be displayed at both the National Portrait Gallery and The National Museum of African American History and Culture, which many are saying is a fitting tribute to both her contributions to science, and the way science and American culture have so often benefited from women of color, often without consent or proper accolades.

The painting itself is deeply embedded with meaning including the cellular design that framed the background of the portrait, and the pearl necklace that's reportedly a reference scientists made to the cancer destroying her cells.

"It will spark a conversation," National Portrait Gallery painting and sculpture curator Dorothy Moss said, "about people who have made a significant impact on science yet have been left out of history."

Scientists and doctors have made immense medical advancements thanks to Lacks' contributions. Now, the next frontier for all of us is in elevating the many black women, like Lacks, who are serving humanity in incredible ways.

No one can change how Lacks and so many others like her were taken for granted in the past, but honoring her monumental legacy is a big step toward moving us all into a brighter tomorrow.