Eva Longoria Brings Stephen Colbert A Tomato. I Didn't Expect It To Get As Serious As It Got.

Lately, actress Eva Longoria has really been bringing attention to important issues that we Americans (and those abroad) hardly ever think about. This interview is proof of that.I really think Longoria has a future in politics. Before you laugh at that idea, remember Ronald Reagan was an actor first, too. Regardless of my dreams of the future President Longoria, this interview she gave to Stephen Colbert about the tomatoes we buy is so enlightening. 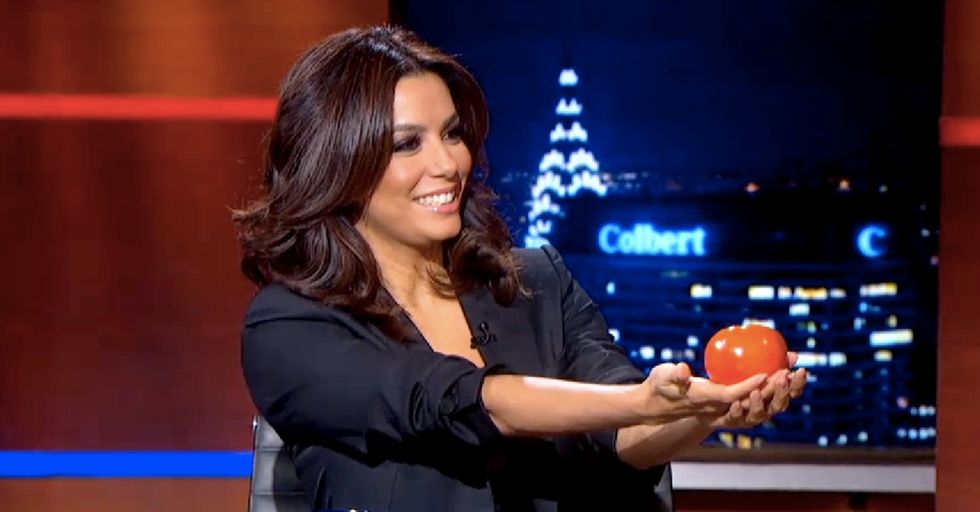 This interview with Eva Longoria — "Desperate Housewives" actress and general badass woman — starts with a prop! A delicious tomato from Whole Foods. It's a gift to Stephen Colbert, who isn't a badass woman but is pretty cool.

Eva was just named Philanthropist of the Year by The Hollywood Reporter. Stephen Colbert is confused.

"Why are you 'philanthroping' instead of simply 'celebritying?'" he asks. She tells him that the release of a documentary she just did called "Food Chains" is coming out. It is about the exploitation of labor in our farms in America.

I think that's a pretty great reason to be "philanthroping."

She wants us to care because we all eat food and we should really care about where our food comes from. Like, do you know where your lunch came from? Before it was in the place you bought it?These workers picking your tomatoes in Immokalee, Florida, are getting paid 1 cent a pound.

I'll let that sink in. For one pound of this...

a real actual human being person gets one of these...

All Eva wants is for them to get two pennies instead of one. It would change your tomato-buying life by 44 cents a year. That's it.

Here's the video interview. They talk about a lot more.

Watch the trailer for the documentary Longoria is talking about below. If you're eating a BLT that's heavy on the T, you might want to put it down.

Luckily for us, Ms. Longoria and the people behind "Food Chains" have created a handy map for you to look at when you plan to buy tomatoes. Just click here to take a look.

(The map looks like this, and you can set it to automatically tell you which stores around you sell fair tomatoes. You can click here too to see it!) If you watched the video, you'll remember, Wendy's won't be one of them.

You've got to love an actress who knows how to bring attention to something we never really think about.